Seven years ago, organizational psychologist Adam Grant passed on the oppurtunity to invest in the startup his student was launching because he and his co-founders were unorganized, less-than-dedicated procrastinators. That company, now known as Warby Parker, was recently named the most innovative company by Fast Company, and now Ms. Grant handles the couple’s investments.  How these students who showed little promise managed to grow such a disruptive company sparked Mr. Grant’s interest and prompted him to begin studying “originals” and what makes them tick.

“Originals are nonconformists—people who not only have new ideas but take action to champion them,” Mr. Grant said in a TED Talk recorded in February at TED2016 and just released on Ted.com. “They’re people who stand out and speak up. Originals drive creativity and change in the world. They’re people you want to bet on, and they look nothing like I expected.”

Throughout his talk, Mr. Grant humorously discusses a few surprising habits of originals.

1. They’re always late to the party

In college, Mr. Grant finished his thesis paper four months before the deadline, and when he was a kid, he woke up at 5 AM to practice Nintendo games until he mastered them, which led a local newspaper to profile him for a story called “The Dark Side of Nintendo.” Unlike himself, who is considered a precrastinator, Mr. Grant discovered that original thinkers are major procrastinators. “I had a student named Jihee, who came to me and said ‘I have my most creative ideas when I’m procrastinating’ and I was like ‘that’s cute. Where are the four papers you owe me?'” She was one of his most creative students, so he challenged her to get some data. She surveyed people on their procrastination habits and then got their bosses to comment on how creative they are. The precrastinators were rated as less creative than those who procrastinate moderately. Next, Mr. Grant designed some experiments to see if the relationship between procrastination and creativity is simply a correlation or if the former actually causes the latter. He asked people to generate new business ideas, tasking some to do it right away and others to do it five or 10 minutes later later. When independent raters reviewed them, those who procrastinated by playing Minesweeper for five minutes (as opposed to doing it right away or playing for 10) were rated as 16 percent more creative. And it wasn’t because of Minesweeper itself; the creativity boost only occurs when you procrastinate after learning about the task.

2. They’re the improvers, not the movers

The notion that the first to bring a product to market is the one who succeeds is a myth. According to a study that looked at over 50 product categories, those first to market—called movers—failed 47 percent of the time, while improvers failed only 8 percent of the time. Mr. Grant didn’t think his student’s e-commerce eyewear company would succeed because he took too long and got beat to market, but that’s because he was taking the time to do it creatively and in a way that would make people comfortable with buying glasses online. “To be original, you don’t have to be first. You just have to be different and better,” Mr. Grant said in the talk.

3. They have a lot of doubts

Mr. Grant also passed on Warby Parker because the founders were very apprehensive. Instead of going all-in working on the company, they all took internships over the summer, in case it didn’t work out. They all lined up full-time positions for after graduation as well—again, just in case. “On the surface, a lot of original people look confident, but behind the scenes, they feel the same fear and doubt that the rest of us do. They just manage it differently,” Mr. Grant said, explaining that originals succumb more to idea doubt rather than self-doubt, which actually leads them to test, experiment and refine. Martin Luther King Jr. is the perfect example. The night before the March on Washington, he was up past 3 AM rewriting his speech. Moments before stepping up to the podium, he was still scribbling notes and crossing out lines. Eleven minutes into his speech, he went off script and said “I have a dream,” which was not in the original script.

4. What really scares them is failing to try

“Originals feel fear too,” Mr. Grant said. “They’re afraid of failing, but what sets them apart form the rest of us is that they’re more afraid of failing to try. They know you can fail by starting a business that goes bankrupt or by failing to start a business at all.” He added that Elon Musk recently told him he was sure SpaceX would fail to make it to orbit let alone get back, but it was too important not to try. “If you look across fields, the greatest originals are the ones who fail the most, because they’re the ones who try the most,” Mr. Grant said. 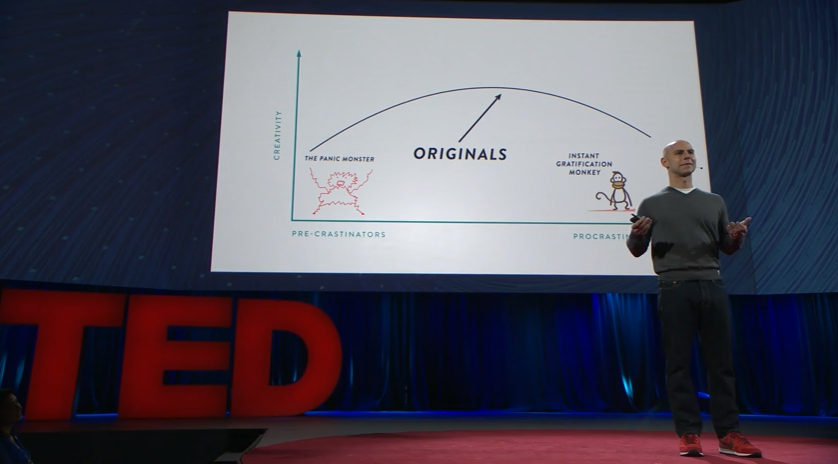