The streak continues, and it seems job growth is finally turning a corner and driving increases in wages and overall labor force participation. In March, payroll employment grew 215,000 and the unemployment rate ticked up slightly to 5.0 percent as more job seekers entered the workforce. Over all, this month’s report shows that the labor market is resilient. Employment growth drives wage growth which puts money in the pockets of consumers, driving GDP growth. Today’s report should help ease concerns of analysts worrying about recent softening trends in GDP growth.

This month the economy added 215,000 total non-farm (TNF) jobs. Job growth has been consistently around 200,000 jobs per month on average since 2013, and while 2015 came in slightly below the average, the steady employment growth has brought the unemployment rate back down.

2) Workers are joining the labor force and that’s good news!

This month the unemployment rate ticked up to 5.0%. Yet, the bigger story remains the overall picture of more workers entering the labor force, as Labor Force Participation (LFP) ticked up to 63.0 percent. The overall LFP includes youth, many of whom are in school, as well as seniors, many of whom are retired. So often it’s helpful to dig into the dynamics for people age 25 to 54 to get a better sense of how the labor market is performing for people in this “prime age” demographic. For this group, participation increased to 81.4%, highest in over 3 years (December 2012), and the employment to population ratio increased to 78.0%, the highest since November 2008. This confirms that the labor market is really getting better for workers. 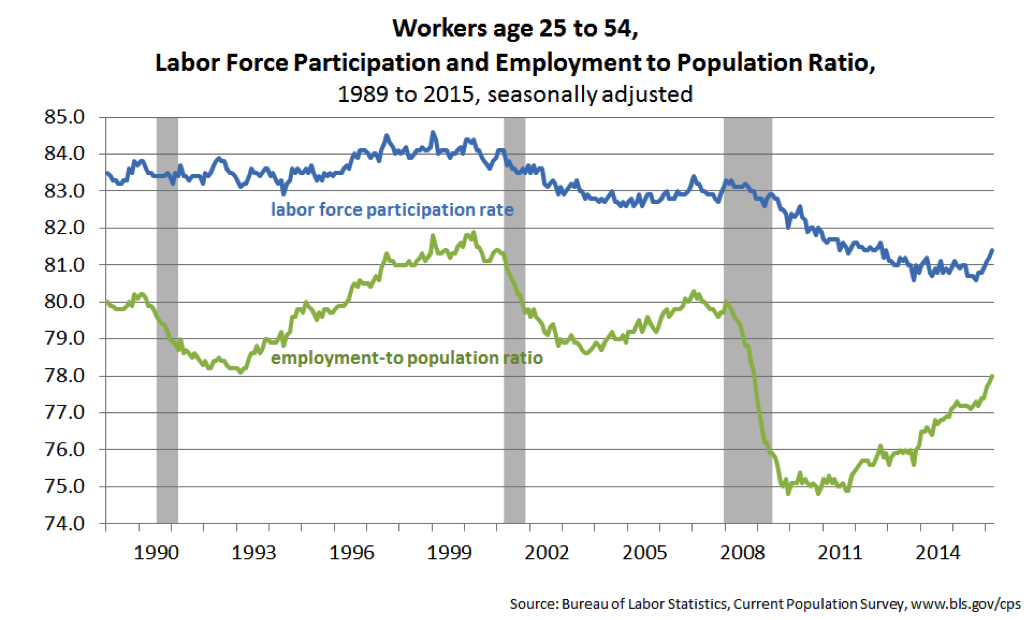 3) The Unemployed are finding jobs again

For most of the recovery, many of the drops in the overall unemployment rate were driven by people leaving the labor force. The reversal from 2009 to 2014 partly explains why wage growth remained anemic even as the unemployment rate dropped. However, in five of the last six months more unemployed people found jobs than dropped out of the labor force. Now that these flows seem to be returning to normal, we should see a tighter labor market driving better wage growth. With more people joining the labor force, we expect greater the competition for talent (less labor market “slack,” in econo-nerd-speak), and ultimately higher wages for all workers. 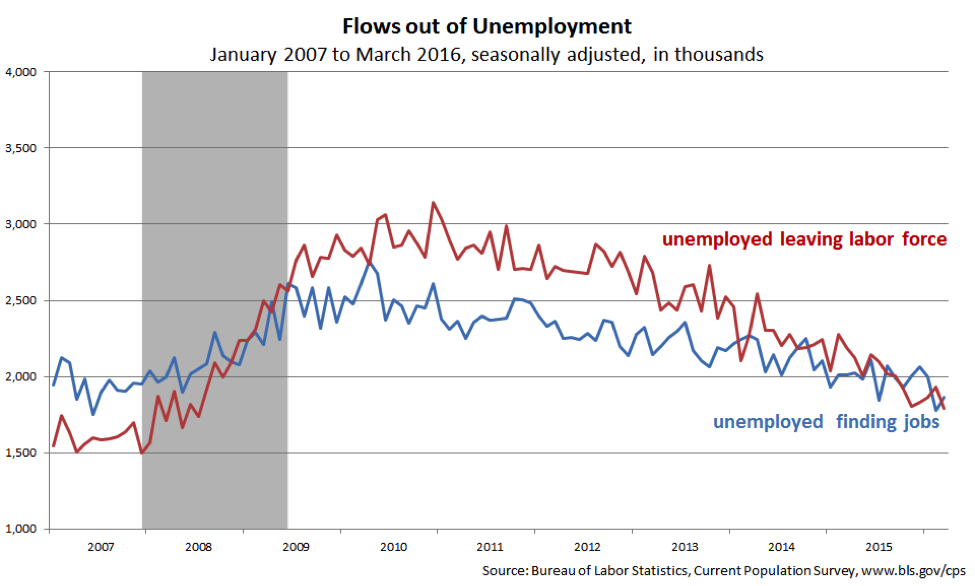 Flows out of unemplotment (Source: Bureau of Labor Statistics)

Despite constant worry-worts warning that runaway inflation was just around the corner, 2015 saw very low inflation resulting in real gains in wages for workers. Ideally, we should see both steady inflation as well as steady wage growth, and recently we’ve seen signs that wage growth has started building again. This month, average hourly earnings were up 2.3% over the previous year. We hope to see this figure grow as the labor market tightens. 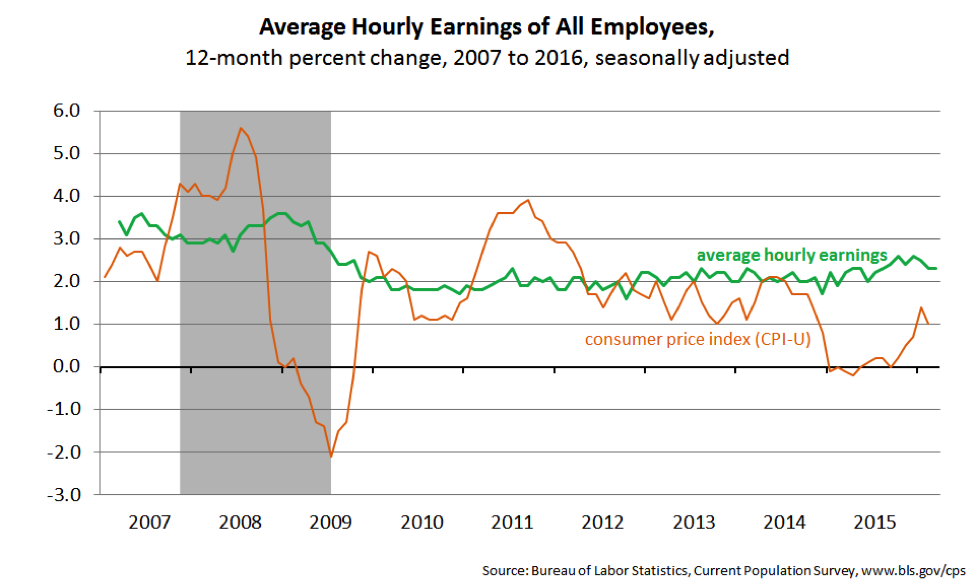 The employment gains this month were lead by Education and Health, Retail Trade, and Leisure and Hospitality industries. Other notable industry monthly gains were Construction and Professional & Business Services. Manufacturing continues to drag, which may be tied to the fall in exports we have seen in the GDP data. Most industries are tracking in the same direction as their prior 12 month averages. 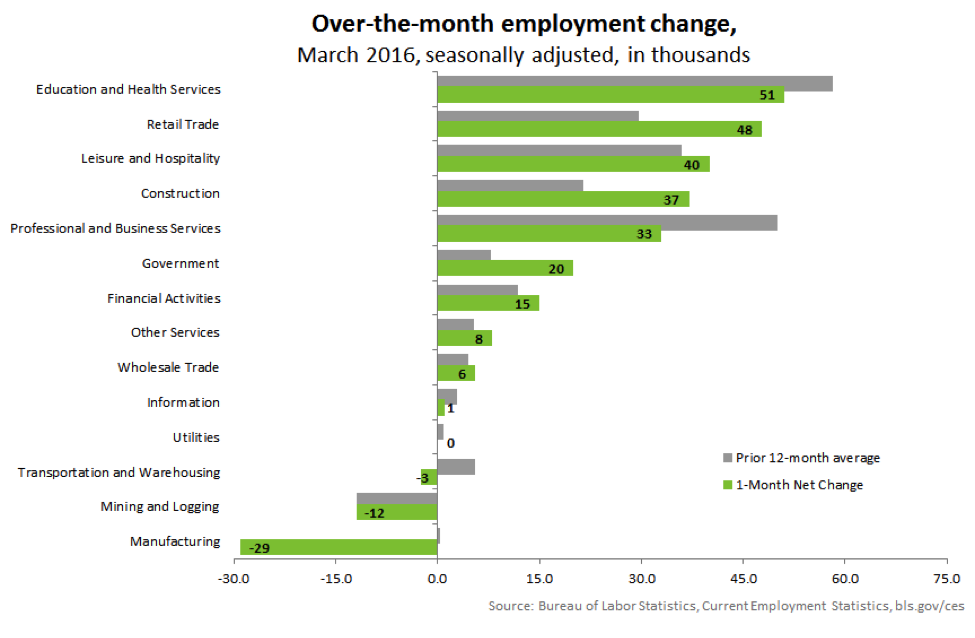 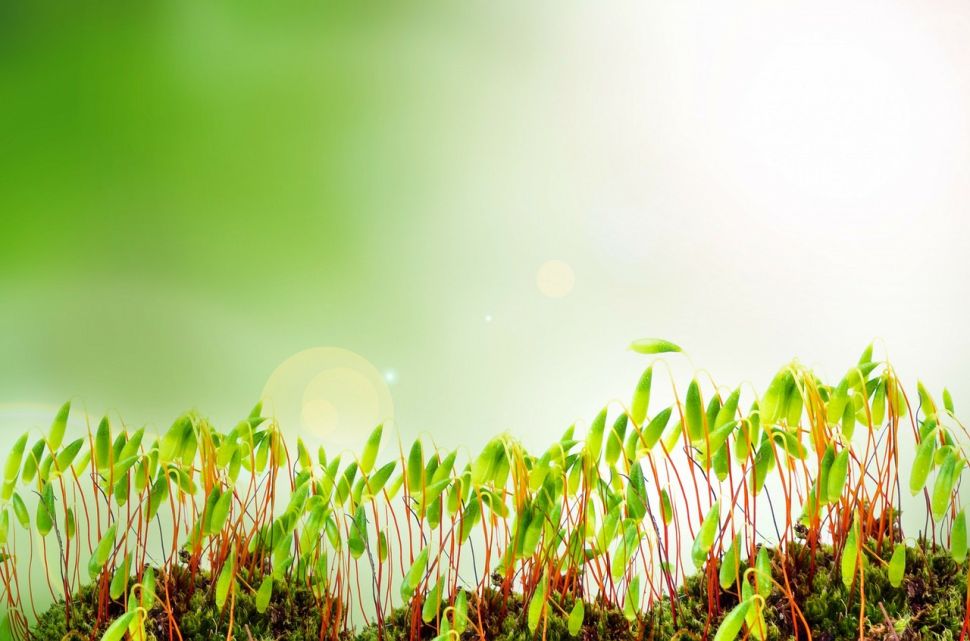