Tiffany Williams and Dwayne Salandy long put off tying the knot. The couple, who met seven years ago, are extremely busy (finishing graduate school and opening a dojo, respectively), and they considered a traditional wedding (and the stress inherent in planning one) daunting. So last Thursday, Ms. Williams and Mr. Salandy got hitched at a pop-up wedding.

The event, produced by the startup PopBliss (“The new way to say I Do”), was among the first of its kind. For $5,000 each, the couples received a completely pre-planned nuptial at a secret location. A bus picked up clients and their guests at Yotel, then transported them to a mystery venue—in this case the 210-foot Hornblower Infinity yacht.

The fee—a bargain compared to the average Manhattan wedding which costs more than $76,000, according to The Knot—included every single thing needed for a ceremony and reception, except the dress, tuxedo and rings. The only catch: five other couples and their guests take the plunge at the same time.

The concept appealed to the newly named Ms. Salandy. “I liked that…I just show up and get whisked away.”

Valerie Nome, who happens to be an event planner for Bauer Publishing, and her now-husband Jon Yarger, only heard about PopBliss a few weeks ago. “There would have been no way for us to plan something on this scale. So when the opportunity arose, we thought it screamed us,” she said.

Following a “mocktail” hour while docked at Pier 40 on West Houston Street, an interfaith minister prompted the grooms to step out from behind a curtain onto a red carpet strewn with rose petals. The brides, who hid behind a curtain on the opposite side of the room, followed suit. One by one, the couples walked toward each other, meeting on a stage where they took turns exchanging vows and rings. Shortly after a synchronized “you may now kiss the bride”—Mazel Tovs—there was a group first dance, cookie-cutter cake cutting and a simultaneous bouquet toss.

The back-to-back vow exchanges included matrimonial chestnuts like “I’ll be your shoulder to cry on” and “we are more than to have and to hold.” But while the serial sweet nothings recalled an echo chamber, the couples themselves were diverse. One pair met online while another finally realized their high school crushes for each other decades later. Two women renewed their vows after seven years of marriage. The idea of sharing the day with strangers appealed to the couples as well as their guests. After the ceremony, the Observer chatted with Debbie Vazquz, the mother of bride Valerie Diaz, who was really excited to party with the other families.

“I thought the element of surprise was amazing, and as a New Yorker, I was like, ‘let’s do this!’ ” she said. “I love that…everyone is sharing the love.”

Like mother, like daughter. Ms. Diaz told us she chose PopBliss because it’s non-traditional, and She sees wedding sharing as an emerging trend.

Ms. Salandy agreed. “I know they want it to catch on, but I personally don’t go along with trends. I’m at the beginning of the trends.” 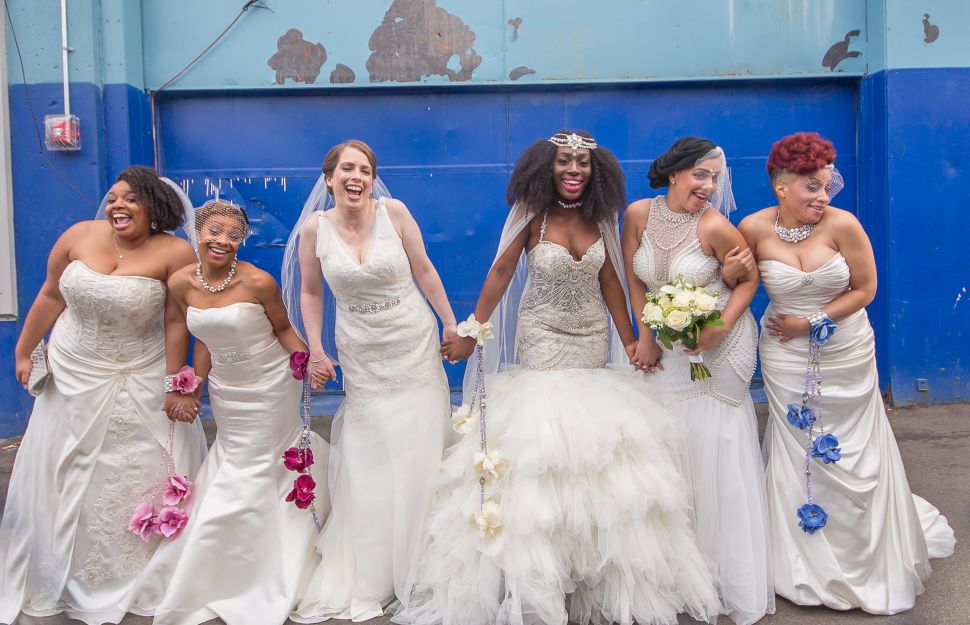