There’s a marked difference between attending a bridal market week and  a ready-to-wear fashion week. For the most part the scene is a lot calmer, has the affectations of being a good deal more elevated (champagne through a straw anyone), and can feel a lot more intimate.

Spread throughout showrooms and studio spaces around Midtown and the Garment District (one show did crawl all the way up to the Upper East Side), this season’s shows were versatile to say the least. “The bridal rules have changed,” Lela Rose said at her Industria Superstudio presentation that saw an emphasis on ease as well as black-tie separates. “These days it’s a lot more about personal expression and different ways of doing things.” Bridal week regulars like Ms. Rose, Marchesa and Oscar de la Renta were joined this year by the likes of Elie Saab and Christian Siriano.

With the shows having mostly wrapped today, we take a look at six memorable things we saw at the spring 2017 bridal presentations.

The Bride In Black

One of the strongest collections of the week was Naeem Khan. Shown coincidentally on the same day that the Duchess of Cambridge Kate Middleton wore a design of his at the Taj Mahal, the range landed Mr. Khan with a standing ovation. The intricate beadwork and hand embroidery of the gypsy-inspired line was breathtaking, but the moment to remember was the rose embellished black gown and sweeping veil that closed the presentation. It was a surprise if there ever was one.

There’s no need to save all of your sexy looks for the honeymoon, this season, your walk down the aisle can be just as tantalizing. For designers like Israeli-based Berta, that meant taking a page from celebrities like Kim Kardashian, Beyonce and Cher and tagging along for the naked dress trend. Illusion dress were definite high points of the Harvard Club presentation, featuring slinky silhouettes, V style open backs and see through panels.

To the sounds of Tina Turner’s “GoldenEye” and Sam Smith’s “Writing’s on the Wall” contributions to the 007 franchise, models at the Reem Acra presentation sauntered down the runway in a parade of mostly elegant and boudoir inspired gowns (hello bustier!).  But it was in the smallest details where delight was found. For those who could see past the standout options like a frothily tiered gown, makeup artists had applied pearls as teardrops on the faces of models.

Show after show offered up their own takes on the little white dress. Amongst the best options, came Peter Copping’s third bridal collection at Oscar de la Renta. From silk shift dresses with feather embroidered hems to long sleeved lace options, the low-key designs were definite stunners. Of course one can’t forget the collaborative Barbie the brand unveiled in tandem with the showing.

For a while now, the idea of dressing a “modern bride” has seemed to necessitate designing options for those who might not want a wedding dress at all for their big moment. In his debut range, Christian Siriano sent two trouser-inclusive styles, but he wasn’t the only one by far. Carolina Herrera offered up a style, paired with a trailing veil while Monique Lhullier’s version boasted a sheer train of its own.

Shirking the traditional schedule isn’t the only way that Houghton’s Katharine Polk bucks the mainstream. It’s also an integral part of her design aesthetic. Using bodysuits created in collaboration with Commando as the base for some pieces, cut outs as well as fishnet stockings and platform pumps, the designer kept up her subversive appeal spread across the three story townhouse that once played host to the Chrome Hearts flagship. 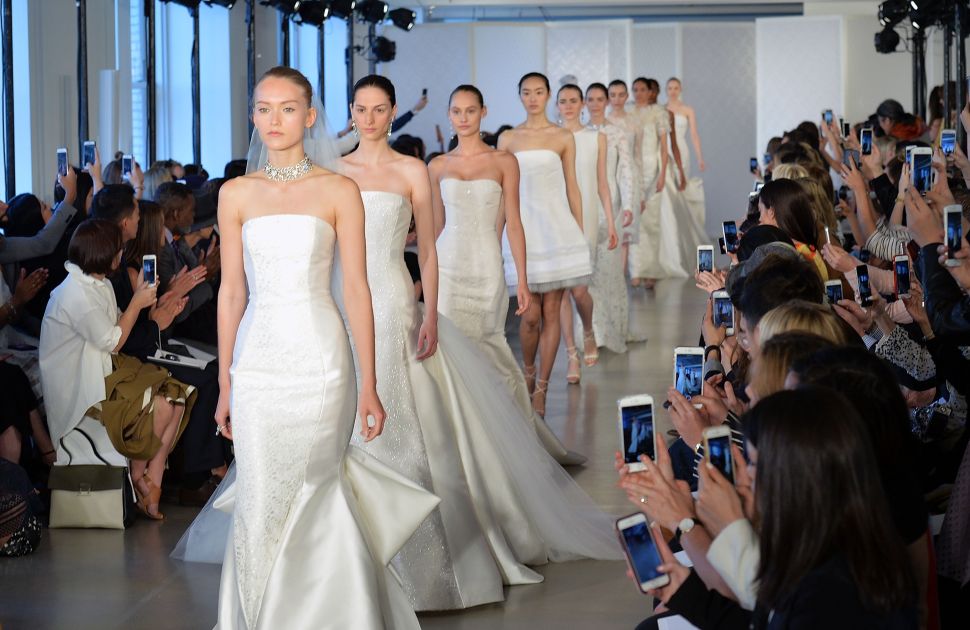