One of the many measures of Hamilton‘s success is the sheer number of parodies that have been written of Lin-Manuel Miranda’s compositions—”My Spock,” a parody of the song “My Shot” about Star Trek characters, was recently posted on YouTube, as was the superhero ditty “Batlexander Manilton.”

But the Internet may have finally outdone itself with Jeb! An American Disappointment!, a full-length Hamilton parody about Jeb Bush which was posted online yesterday. The musical, available in this Google Doc, repurposes every song in Hamilton to make it about the embattled Bush brother.

“My Shot” becomes “My Point,” as Jeb defends the exclamation mark in his slogan with the help of his friends Lindsey Graham, Chris Christie and John McCain:

“Hey yo, I’m just like my country I’m excitable and jumpy,
I am not throwin’ away my point!”

Jeb joins forces with his brother George, but still ends up losing the primaries, and in the end the former Florida governor learns an important Internet lesson:

“You have no control
Who wins, who drops, who memes your story”

While this idea is hilarious on its own, the way it came to fruition is just as interesting. A Hamilton fan named Alex Cohen proposed the idea for the musical in a Facebook group, and solicited contributions from fellow group members. In the end 89 people (all of whom are listed at the top of the doc) contributed lyrics for the project, making it a truly crowdsourced musical.

Mr. Cohen has not yet responded to an Observer request for comment. 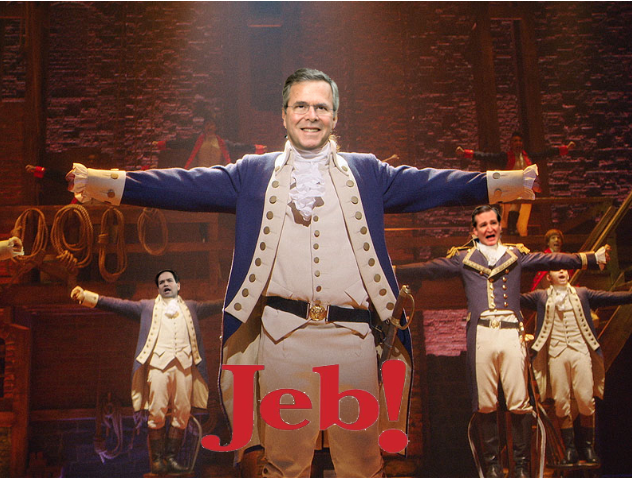