A few months ago, Michael Grant opened a Manhattan version of the classic Florence sandwich shop Antico Noè. This is the first foray into the restaurant world for Mr. Grand, whose last job was in financial risk management at Carl Marks Advisors, the no-shit name of a family office in Midtown. Mr. Grant and his partner, Vinny Dautaj, have grand plans for the sandwich shop. But as Starbucks eyes Italy for its next expansion, I wanted to explore what it meant to try to transplant a little gem of Florence into New York City. And in homage to Florence’s most famous son, Dante Alighieri, I did it in his original rhyme scheme, terza rima.

Midway through the journey of my day, I found myself
hungry but the lunch I craved had vanished into mist:
a sandwich I searched, that pleased my taste and my health.

Could it be that such an option in Midtown just did not exist?
Through concrete canyons coursing with lunch-breaked suits
I chased my quarry through the delis and bodegas in my midst.

Glimpses of the triumphs I had eaten trailed me in pursuit:
Schiller’s Cheeseburger, smorebrød, pickled shrimp banh mi,
tacos in Juarez in June and, in Paris, saumon en croute.

And then on 53rd street, just east of the M and the E
I espied a name that awakened long fallow knowledge,
promising my hunger remedy in the form of Florentine panini.

Famous to those who studied abroad there in college,
Antico Noè, nestled into an underpass, has for 71 years,
served the world’s best sandwiches, a fact widely acknowledged.

Now they’re here in New York, thanks to a slick licensing deal
with the original owner. So I got in line and regarded the menu.
I ransacked my mind’s ledger for details of my Florentine meals.

The new joint lacks the broke down charm of the original venue.
There the sandwiches were made to order and took a half an hour.
The menu was so messily written you’d order what you didn’t intend to.

I once lived in that proud city of domes and medieval towers.
So Antico Noè is my Italian madeleine, my lunch-hour Beatrice.
Would the bright lights and big city sap her of her powers?

The answer is yes, sadly. Let’s break down how in each way.
A restaurant is a sonata with complex instrumentation,
a living thing that changes each year and each day.

To yank Antico Noè across the sea is like a forced migration.
Uprooted and denuded and made into fast-casual resto,
Antico Noè has lost that which made it a revelation.

The difficulty, the delay, that was the best part of the quest so
take that away and the once-magical sandwich is a standard panino.
The prosciutto is tasty, the bread too. Not to mention the pesto.

But now they are ordered in haste by stressed-out and clean bros.
It was a wise business decision. Antico could start a new Shack Shakeup.
Alas, replication turned what was once poetry into mean prose.

The sandwiches sit pressed in their cases like clowns out of makeup.
Only 10 are offered out of the original 25 to be more efficient,
but Manhattan expedience a magical sandwich stop does not make up.

So for Antico Noè, I’ll pull down only two stars from the entire firmament
for understanding the panino but not what this paninoteca meant. 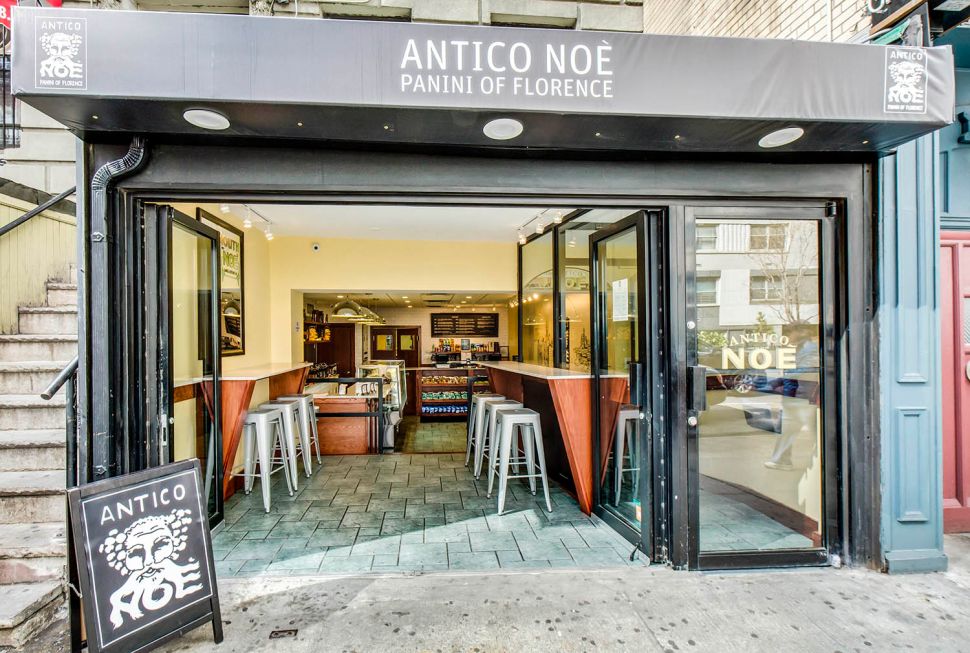