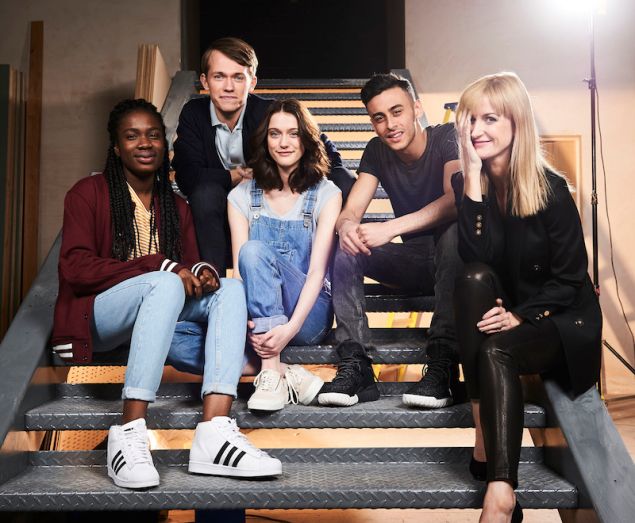 The cast of ‘Class,’ airing on BBC America this year. (Photo: BBC/Ray Burnistoun)

The BBC’s long-running and record-breaking science-fiction television show Doctor Who has become quite the behemoth in recent years. Like the Marvel movies, the Time Lord’s travels have led to further adventures linked to, but not including, The Doctor; existing within the same universe.

Later this year we’ll see Doctor Who’s fourth spin-off series within a decade, Class (airing on BBC America). But these aren’t the only spin-offs out there.

Take a 50-year trip with us as we look back (and forward) to the many Doctor Who spin-off series, including some that never quite made it to screen.

Creator of the Daleks, Terry Nation, knew he was onto something special with his intergalactic pepper pots and, after two big screen movies, decided a television series of their very own was the way to go. Production was due to start on the half-hour episodes in late 1966, but the BBC bailed—leaving Mr. Nation to take his idea to the U.S. network NBC, unsuccessfully.

A pilot was written, The Destroyers, and featured the return of the Space Security Service and Sara Kingdom (played by Jean Marsh, who would go on to find fame with Upstairs, Downstairs), first seen in The Daleks’ Master Plan. An audio production of this story, starring Ms. Marsh, was released in 2010.

This one-off special was designed as a pilot for future adventures of the computer canine and also brought back fan-favorite Sarah Jane Smith (played again by Elisabeth Sladen). Oddly, the two had never appeared in Doctor Who together but they made for a damn good partnership.

Though it didn’t go on to further episodes (despite a healthy audience of 8.4 million viewers—besting every episode of Tom Baker’s final year in the TARDIS)—it is fondly remembered. Especially for the theme song…

Incredibly there have been not one, but two attempts to launch Doctor Who as a cartoon. And both failed to see the light of day.

After the show’s cancellation in 1989, Canadian animation house Nelvana was approached by the BBC to produce an animated series. The company has the auspicious acclaim of presenting Boba Fett to the world for the first time in an animated segment during The Star Wars Holiday Special in 1978 (and would also go on to produce Star Wars spin-offs Droids and Ewoks).

In the early 2010s, not long after Matt Smith was cast as The Eleventh Doctor, Dan Norton was involved in another animated series and pitched some eye-catching designs, check them out here. Dan, who worked on the Thundercats reboot, revealed some years later that the project fell through, the BBC deciding to concentrate solely on the live-action series.

Technically, this is not a spin-off but it’s hard to know where exactly to place this animated story in the Whoeuvre.

Starring Richard E Grant as The Ninth Doctor, his companion was played by Oscar-nominated actress Sophie Okonedo while The Master was played by Golden Globe nominated actor Sir Derek Jacobi. Quite the cast, we think you’ll agree (and all three would eventually turn up on Doctor Who post-2005).

But almost as soon as it hit the internet (the medium for the story), it was announced that the Time Lord would be back with his TARDIS on television in a new series starring Christopher Eccleston as The Ninth Doctor.

So where does that leave poor REG? Well, Whovians are a canny bunch and have tried to retrofit the ‘Shalka Doctor’ into the canon of the show. In 2013’s The Name of the Doctor, the Great Intelligence took the form of Richard E Grant and entered the Time Lord’s time stream to mess things up for our hero—thus allowing this incarnation to exist as the Doctor (no, I don’t fully understand either).

Ok, we’re slightly cheating with this one. The behind-the-scenes series was more of an ancillary show. Starting at 30 minutes, the episodes would grow to 45 minutes and sometimes an hour.

For the kids, there was also Totally Doctor Who, which ran for two season on CBBC in the UK. It included interviews, behind-the-scenes action, competitions, fans and the weekly animated story The Infinite Quest, starring the then-Doctor, David Tennant.

John Barrowman made an immediate impression as omni-sexual time agent Captain Jack Harkness in Christopher Eccleston’s season in charge of the TARDIS in 2005. For the first time ever in Doctor Who, there was an openly—and we mean OPENLY—LGBT character. Quite rightly, Mr. Barrowman’s rambunctiousness earned him his own show and his own team.

Based in Cardiff, which was handy as that’s where it was filmed, Torchwood investigated alien activity (caused by the Rift, established in 2005’s Doctor Who Series 1) and got up to all sorts of sexy hi-jinx. AND profanity, too! Jack assembled an emotionally-damaged team who were more fragmented than the aliens they tracked down.

Though most critics never really warmed to the show in its first two seasons, fans adored the antics of the Torchwood team. It wasn’t until 2009’s five-part season Children Of Earth when the show finally grew up. This mini-series was harrowing and deeply disturbing, proving just how affecting and how engaging Torchwood could be. Fans, being the well-balanced types, were deeply upset when Captain Jack’s boyfriend Ianto was killed. So upset, in fact, that a shrine still exists to this day in Cardiff dedicated to his memory. Yes, that’s “well-balanced.”

Miracle Day, the final season, saw the Torchwood gang (what was remaining of them after multiple deaths over the years) go Stateside and meet Bill Pullman and Mekhi Phifer. Sadly, it didn’t reach the heights of he previous season, despite many memorable moments that could only come from Russell T Davies and Torchwood.

Doctor Who’s success in 2005 was so speedy and so all-encompassing that the BBC was keen to exploit its product. Children’s channel CBBC approached showrunner Russell T Davies about the possibility of a series looking at a “young” Doctor.

But he was having none of it, saying, “Somehow, the idea of a fourteen-year-old Doctor, on Gallifrey inventing sonic screwdrivers, takes away from the mystery and intrigue of who he is and where he came from.”

Instead, Russell very wisely suggested the return of a former companion—more on that hit later.

Talking to Doctor Who Magazine in 2006, Russell T Davies revealed that a spin-off based upon the hugely popular character played by Billie Piper was on the cards. So much so that it had been commissioned and budgeted by the BBC, and would see Rose on the parallel Earth seen in Series 2 of Doctor Who, also known as ‘Pete’s World’ (after her father, Pete Tyler).

Mr. Davies was initially keen to make one 90-minute special every year; “We’d have had a lovely budget and done brilliant things with it,” the writer claimed. Ultimately, however, the showrunner himself pulled the plug on the series citing it was, “a spin-off too far.”

A second bite at the spin-off cherry for former companions Sarah Jane Smith and the tin dog K-9. Though the latter would fade into the background (literally stuck in a cupboard) due to rights issues with its creators (K-9 could only be used in a certain amount of episodes), the former shone like never before.

Coming off the back of her return to Doctor Who in 2006’s School Reunion, actress Elisabeth Sladen found a whole new generation of kids enthralled by her exciting London exploits. Joining the intrepid journalist was her adopted alien son Luke, his school friends and supercomputer Mr Smith; tackling alien threats on a weekly basis. So good in fact was the quality of the show that its parent stars David Tennant and Matt Smith both made a turn as their respective Doctors.

With the cast regularly changing, it seemed like Sarah Jane would continue her adventures for years to come. Tragically, Elisabeth Sladen died in 2012 at just 65 years of age, bringing a premature end to the fantastic and thrilling children’s show that adults loved too.

Whereas every other show listed is here is most certainly worthy of your time, this effort from Australia is not. For over a decade, a spin-off on the lovable mechanical mutt had been mooted (and sometimes even announced). With the success of “New Who,” the time was right to try again; and with a new look too for the programmable pooch.

John Leeson was back for voice duties but the 26 episodes lacked the charm of the aforementioned The Sarah Jane Adventures, and one wishes the creators of K-9 had been more welcome to fully license their creation to the BBC.

Coming later this year is a spin-off set in Coal Hill School, home to a number of Doctor Who adventures and companions—namely Ian and Barbara (the Doctor’s very first human traveling chums), and more recently Clara Oswald and Danny Pink. The latest info on the show teases: “What if your planet was massacred and you were the sole survivor? What if a legendary figure out of space and time found you a place to hide? But what if the things that want to kill you have tracked you down?” Could The Doctor be this legendary figure? Could we be seeing a Peter Capaldi cameo in Class?

The cast are unknowns, so far—with the exception of Katherine Kelly, fresh off the UK success of The Night Manager (coming to AMC later this month)—and has been created by Young Adult author Patrick Ness, who is a card-carrying Who fan and an award-wining American writer. Doctor Who boss Steven Moffat says, “Class is dark and sexy and right now. I’ve always wondered if there could be a British Buffy—it’s taken the brilliant Patrick Ness to figure out how to make it happen.” If that doesn’t whet your appetite, Class promises to show what happens when too much time-travel happens in the same area—the walls have become thin at Coal Hill School, and something is pressing in on the other side—awaiting war. We can’t wait!

Class airs on BBC America later this year while Doctor Who returns on Christmas Day, 2016. 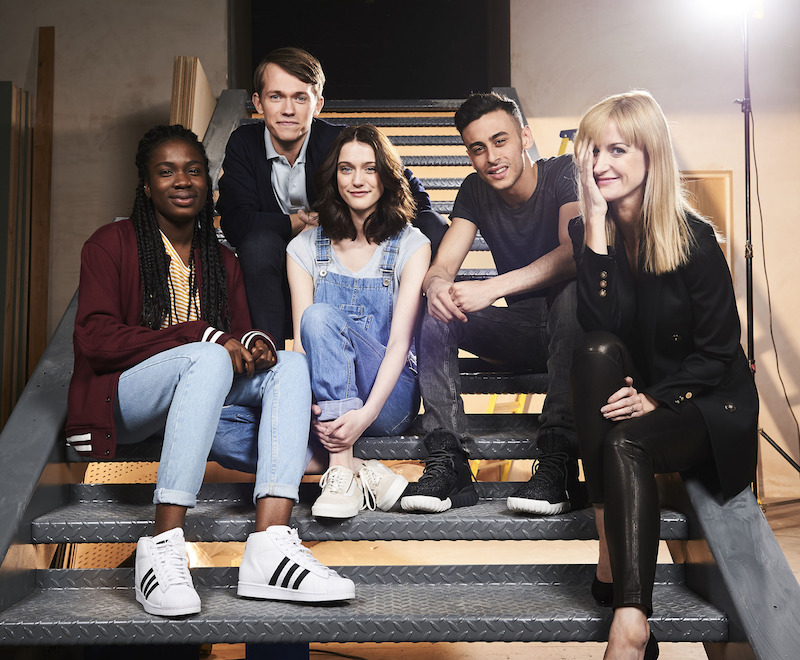