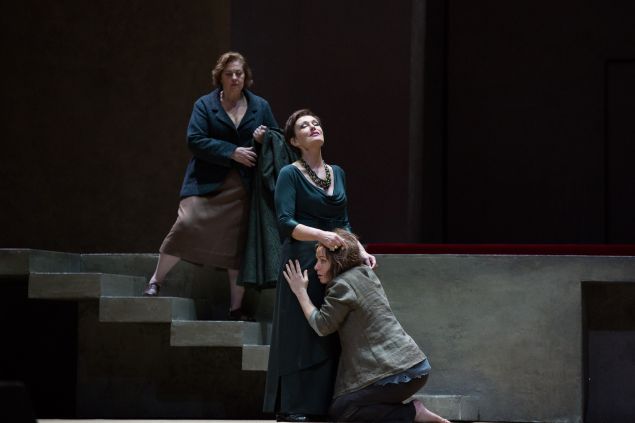 Waltraud Meier as Klytämnestra and Nina Stemme in the title role of Richard Strauss’s Elektra. Photo by Marty Sohl/Metropolitan Opera.

“I was a corpse among the living,” recalls the heroine of Richard Strauss’s Elektra in her fleeting moment of triumph at the end of the opera. In Patrice Chéreau’s slow-simmering but ultimately shattering production of this work that premiered at the Met Thursday night, Elektra is not the only corpse: hatred, resentment and terror have left a whole community spiritually lifeless.

The 1909 opera is an overripe, exuberantly orchestrated Freudian variation on the classic Greek vengeance myth. Elektra obsessively plots for her long-lost brother Orest to execute their mother Klytemnestra for the murder of their father Agamemnon.  In the face of these oversized emotions, though, Chéreau’s characters seem drained of affect. For them, bloody revenge has become mere drudgery, no more glamorous than the listless sweeping and mopping the palace’s serving women do in the opening scene.

This manner of playing against the text works brilliantly, most notably in the scene in which the guilt-wracked Klytemnestra seeks advice from her surly daughter. Despite the character’s extravagantly eerie entrance music, Waltraud Meier seemed only mildly peeved, her distress apparent only in a tiny hand wringing gesture. Later, in Elektra’s celebrated dance of vengeance, Nina Stemme was quickly reduced to a few random spasms, ending frozen in catatonia on a stone bench.

That the production design—Richard Peduzzi’s ghastly, anonymous industrial space and Caroline de Vivaise’s wan modern dress costumes—echoed Chéreau’s bleak vision was no surprise. But the vocal performances fit into the somber scheme as well. Ms. Stemme’s dark, grainy soprano soared only occasionally, mostly melding with the orchestra as an expression of grim determination. Ms. Meier’s slight mezzo, wielded with virtuoso skill, stripped away the grandeur of Klytemnestra’ torment, leaving behind only a dull ache of remorse.

Despite his luxurious bass-baritone, Eric Owens sang with such restraint as to make the character of Orest seem ambiguous and sinister. In contrast, the hard-driven high vocal lines of soprano Adrianne Pieczonka made the virtuous sister Chryosthemis feel self-indulgently out of synch with the malaise surrounding her.

Complementing the sobriety of production and performances was the exotically gorgeous conducting of Esa-Pekka Salonen, highlighting a myriad of colorful details in the orchestration. His unconventional brisk tempos accomplished the miracle of making this very dense score sound youthful and fresh.

Hanging over this project is another tragedy: Chéreau’s death almost two years ago, soon after he created the original version of Elektra for the Aix-en-Provence Festival. But the Met’s posthumous production glows with a serene truth: even a tale of utter futility can be magnificent if it is told with Chéreau’s clarity and passion. 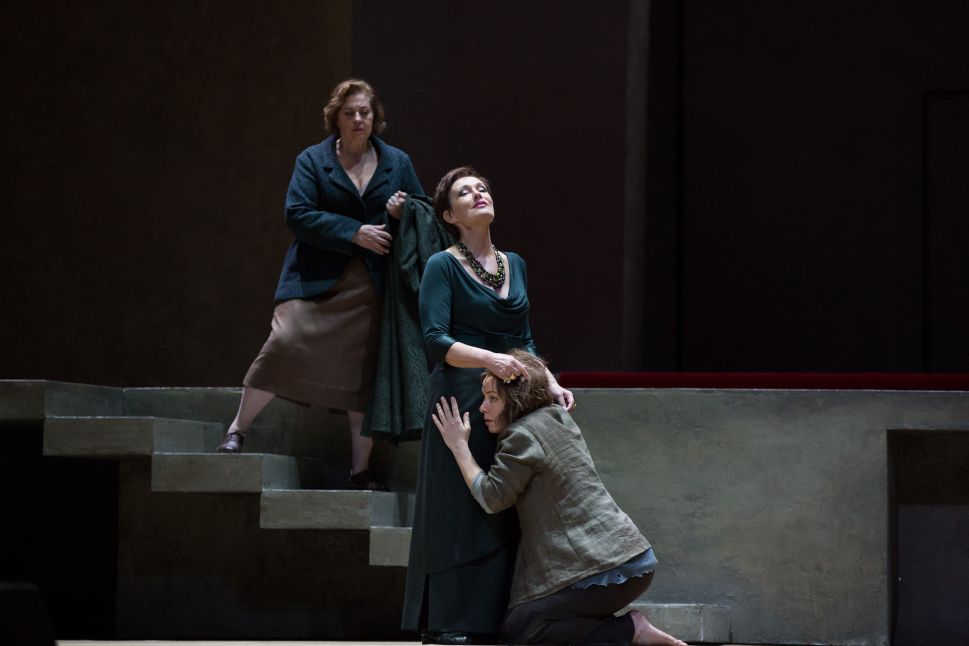