There have been attempts to force the closure of the Rikers Island jail for years, but Glenn Martin thinks that the failed efforts so far have been missing a key ingredient: “the community’s voice.”

That’s why Mr. Martin, the founder of JustLeadershipUSA (JLUSA) has put together #CLOSErikers, a group formed by 58 community, faith-based, and criminal justice reform organizations, which launched its campaign with a rally on the steps of City Hall yesterday.

Discussion over the fate of the city’s notorious jail has flared up in recent weeks with calls from figures such as Governor Andrew Cuomo to close the complex, located on the island just northwest of the LaGuardia airport.

A commission headed by former chief judge Jonathan Lippman, of which Mr. Martin is a member, is set to consider the tangle of issues that would arise from attempting to close the jails, including the sensitive issue of relocating the detainees.

“The conversation so far has been mostly elite players just debating each other in the media. Today is the day where it’s about the community,” Mr. Martin told the Observer. Asked about the issue of cost, raised by Mayor Bill de Blasio and others, he said “If you’re going to build a $3 billion light rail in Brooklyn, just double that and you can save kid’s lives. New York needs to own this, own Rikers Island.”

Several speakers referred to both the violence that takes place within and the decrepit state of the complex itself. A woman identified only as Anna P., the mother of a current Rikers inmate, said that her son had been incarcerated since October 2010 without trial in conditions that would be “considered environmental building violations in the regular world.”

The Rev. Rubén Austria, Executive Director of Community Connections for Youth, said he had come to “know about Rikers Island through visiting young people who were detained there,” who said they “didn’t come to Rikers as a violent person, but [they] left feeling like [they] had violent tendencies.”

Nathaniel Linden, a member of Vocal New York and former Rikers inmate, put it more simply: “You see the sun here? It doesn’t shine there.”

Mr. Martin said that part of the campaign’s objective was to provide “support for the mayor,” who he saw as willing to move forward on Rikers, though he used one of the mayor’s signature catchphrases to needle him on his progress: “It’s not the tale of two cities, it’s the tale of three cities. Rikers is that third city.”

Wayne Starks, a member of Vocal New York, described to the Observer an incident in which he was accused of stealing fish at a market in Chinatown and arrested. “I went through the system. Fortunately I didn’t have to go to Rikers Island. But I could have. I’m here to support those brothers and sisters that been thrown against the wall, arrested, and thrown into Rikers Island.”

The demands to close the “torture island,” as Mr. Martin put it, were described as a fight for civil rights.

“As an immigrant woman myself, I had to study the main ideals and the history of the U.S. Constitution in order to pass the test to be a naturalized U.S .citizen,” said Anne, the mother of a Rikers inmate.

“But in my own life, and in the life of my son, I’ve watched the U.S. Constitution be completely trampled on as my son’s civil and constitutional rights have been violated,” she added. 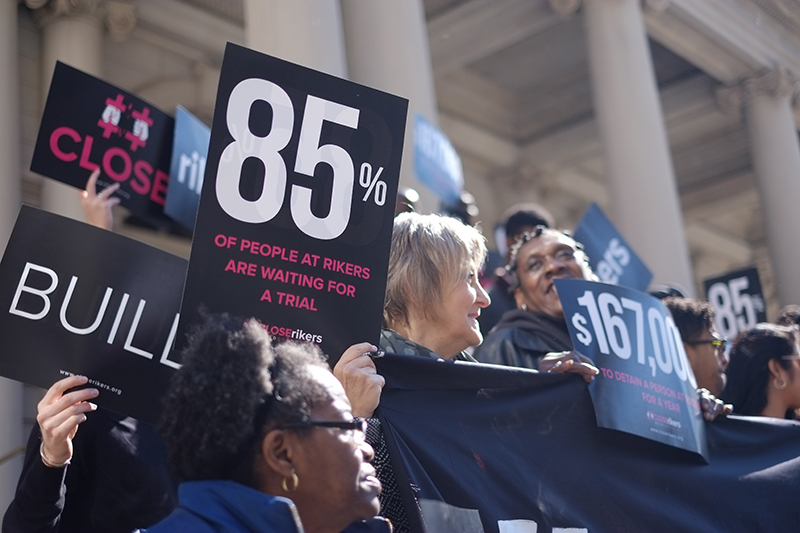