Advocates and Council members rallied outside City Hall today to call for the passage of a pair of police reform bills that have languished for two years, despite support from more than half the body’s members.

The bills, known collectively as the Right to Know Act, would require police officers to identify themselves to people they stop and to inform people that they have a right to refuse a search if the officer does not have probable cause. The identification bill has 32 sponsors; the consent to search legislation has 28—enough to pass the 51-member body.

“Those are two things that are already our rights,” Councilman Antonio Reynoso, the prime sponsor of the consent to search bill, said at today’s rally. “All we’re saying is you should inform us of these rights.”

Mr. Reynoso was one of several council members who spoke about the bill, but he and others avoided saying what, exactly, was holding up the legislation. Police Commissioner Bill Bratton is strongly opposed to the act, and Mayor Bill de Blasio has repeatedly expressed “concerns” about the bills.

Mr. de Blasio ran on a platform of reforming the NYPD, and enjoyed tremendous support from black New Yorkers in his campaign. But while the council members steered clear of blaming him—or Council Speaker Melissa Mark-Viverito, who hasn’t taken a stance on the bills—for the stagnant state of the legislation, several activists sought to remind the mayor he had a re-election campaign coming up.

The NYPD is currently involved in a disciplinary process for the officer involved in Graham’s death, and city officials said it would be inappropriate to meet with his family until that process is over.

“The death of Ramarley Graham was a tragedy, and our heart breaks for the family of Mr. Graham,” said Monica Klein, a spokeswoman for Mr. de Blasio. “Now that the federal announcement has been made, NYPD is proceeding with their internal disciplinary process.”

Both bills were in introduced in 2014, and both got a hearing in June of 2015—but have seen no movement since and are not scheduled for a vote. Sources have previously told the Observer that inaction in the Public Safety Committee was due to Ms. Mark-Viverito, something her office denied.

Ms. Mark-Viverito ran for speaker on a platform of making the council more democratic, and passed so-called “rules reforms” to make it easier for bills to get hearings or votes, even if the bills didn’t have the support of the speaker.

City Councilwoman Helen Rosenthal was one of the members on hand to urge for the passage of the bill. Asked if she was disappointed that, despite rules reform, the Council had yet to vote on a bill with enough support to pass, Ms. Rosenthal paused.

“I’m very proud of rules reform, and I’m in full support of the speaker. It’s so interesting how,” Ms. Rosenthal said, before stopping. “It’s so important to make sure that everyone’s together when we pass bills, especially like this. And this is a situation where I think the NYPD has misinterpreted the intent of this bill. It’s why I feel so comfortable supporting it, because it’s really a very simple act. And to the extent that it takes some time for there to be a comfort level, I’m willing to take that amount of time. I do think we’ll get there.”

A spokesman for the speaker said the legislation is going through the typical process.

Activists supporting the legislation said the rally was the start of a renewed push for passing the bills, which will include district-level efforts to rally support. And if any member gets particularly impatient, there is a way to get a vote without the speaker scheduling it, through a rare “motion to discharge.”

Councilman Jumaane Williams, an outspoken proponent of police reform, said it had been a “rough couple of weeks for the NYPD,” and that while police officer morale was low, so was the trust the community had in police. He said it would be hard for people to trust the department as long as there wasn’t “transparency.” 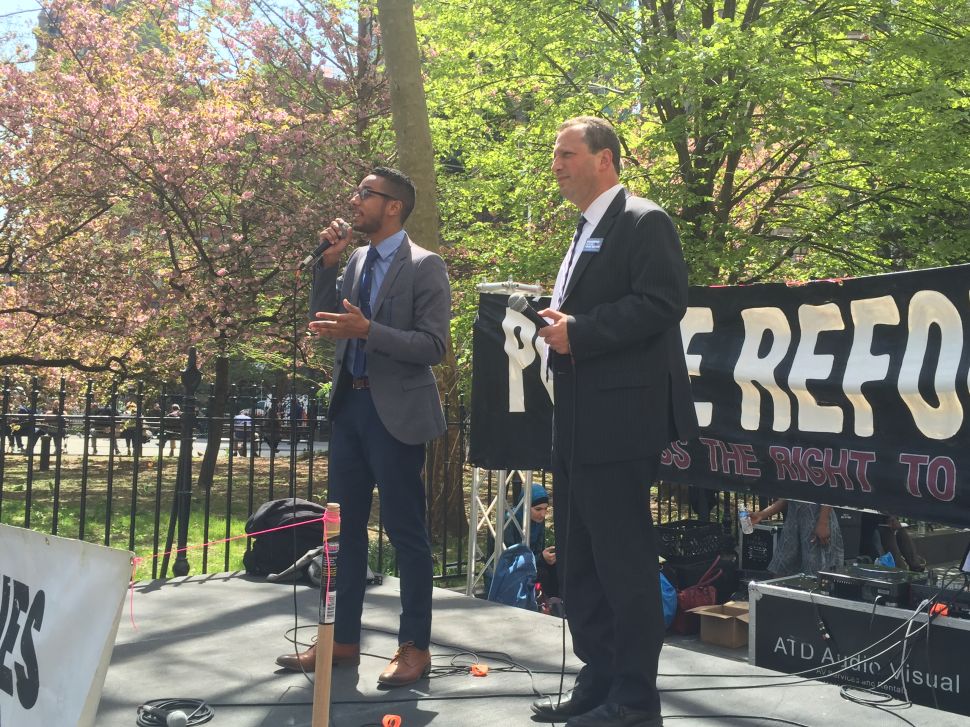