Larry Karaszewski and Scott Alexander the writers behind bio-pic features Ed Wood, The People vs. Larry Flynt, Man on the Moon and the recent Big Eyes, featuring the story of artist Margaret Keane.  All are critically acclaimed endeavors, but not exactly what would be considered box office smashes.

Now that they’ve moved to TV, however, Karaszewski and Alexander have hit gold with their series American Crime Story: The People v. O.J. Simpson.

Karaszewski admits that the pair were initially reluctant to work in TV because the medium didn’t feel right for their storytelling sensibilities. “That 1970s version of TV is what kept us out of doing it. We would always say to each other, ‘what do they do every week?’ But then we discovered the anthology way of doing it and that appealed to us because it has a beginning, a middle, and an end.”

Talking about how movies influenced him in his youth, Karaszewski said, “I grew up in 70s and movies then were telling strange, offbeat stories. There were all these films like Network, All the President’s Men, Taxi Driver, and One Flew Over the Cuckoo’s Nest. That was where the important discussions were. Right now I think those kinds of important discussions are being done via television. People are talking about True Detective, Making a Murderer, House of Cards and stuff like that. TV is where the vital stuff is being made now.”

“To be able to show the shit that Marcia [Clark] had to go through was amazing.”

The team knew immediately that they couldn’t tell the O.J. story as a single contained entity. “As a two hour movie this story just would have been the greatest hits – the stuff you already know. Having the ability to tell the tale over ten hours, with that big of a canvas, allowed us to go off in all kinds of different directions. That’s what makes the trial so fascinating; being able to dig into both those big parts and the little events too. We’re able to spend time with every character and humanize all of these people. With that many characters, doing it in this long-form structure made it so that we could give every character their moments.”

In formulating the narrative, Karaszewski says that he and Alexander originally treated the series as one gigantic movie, but soon realized that they weren’t using the medium efficiently. “So we looked at the arc of the story and ended up making ten movies out of it. That allowed us to say, things like, ‘we’re going to make an episode that’s all from Marcia’s point of view.’

The men also wanted to explore several issues over the course of the series. “Yes, we showed how this case affected race and class and media, but looking at it in terms of gender – we were informed by that because that’s what people don’t think of when they think of this story. To be able to show the shit that Marcia had to go through was amazing. We did that with Chris Darden and Johnnie Cochran as well.  We designed each hour to say something specific rather than being more than just another episode of plot. Each one had a theme and a reason to exist.”

When selecting their writers, Karaszewski and Alexander say that they were looking for people who could both match their tone and who would bring something unique to the table as well. “Our voice is very specific; it’s the weird mix of comedy, drama, and tragedy, more specifically it’s pretty much tragedy with a  joke in the middle of it,” says Karaszewski . “So we needed people who were good with characters but who could also get a laugh and go for those strange choices that we like. Additionally, we wanted to add people to our team who were strong in the areas that we were not. We looked at our weaknesses and said, ‘where can we bring people in who will help us avoid potholes that we may not see?’”

“We knew that, obviously, race was going to be a gigantic issue that we had to focus on so we staffed in a way to address that – We had J.R. Coles, who’s African-American, and Maya Forbes, who’s biracial, but what was interesting was, well, the Darden scenes in Oakland – Scott and I wrote those, Joe wrote the Dominick Dunne dinner party which was sort of like the opposite of how we thought the writers room would function. This sort of showed us that our writers’ room was color blind.”

On recent O.J. Simpson knife news: “This was the day after Donald Trump made those comments about his penis. I thought, ‘wow, we knocked Donald Trump’s penis off the air!'”

Karaszewski admits that the writers’ room was untraditional in another way. “We treated it like a salon. We would give out homework assignments – like ‘so and so, go read the books about the jury and come back and tell us what you found out.’ Then we had someone else read Marcia’s book and then tell us five things that were going on with her. This approach led to our room working in a really productive way which resulted in very dense scripts.”

As a frequent purveyor of real-life stories, Karaszewski offers this piece of advice to writers looking to do something similar. “Don’t look at it as manifest destiny. Don’t look at the whole of it and think, ‘this is how it has to happen because that’s how it happened.’ Look at all the many ways it couldn’t have gone. When you do that, that’s when the conflict comes in and raises a whole new set of questions about how decisions were made. That’s what you explore to tell the story in a new way.”

Karaszewski and Alexander also reveal that they’ve been surprised about the role social media plays in the medium of television. Karaszewski says, “When you make a movie, you do all this build up and it comes out and maybe you do  Oscar season stuff, but that’s about it. It’s a like this big flash. What I’m enjoying is the one-episode-at-a-time model. It’s insane in terms of the feedback. I’ve never experienced anything like it with the continued attention and the recaps and all of that. Every week is like another opening night. I’ve never been in that center of the Twitterverse storm where I can go there any time and there’s a thousand people arguing about whether the gloves fit or not.”

The team says that they especially like the recaps [ed. note: like ours!], with Karaszewski saying, “Some are really snarky and that’s cool, but many are on point in terms of talking about structure and characterization.”

He also indicates that this amount of activity is clearly due to the reach of television. “We marvel at the fact that it’s possible that on the night it airs more people see one episode of the series than all of our movies put together.

While the series was mid-story, the discovery of a knife at Simpson’s former house hit the news, about which Karaszewski laughed as he said, “Truthfully, I thought it was just some kook, but then I saw that CNN did three hours on it that day. And, this was the day after Donald Trump made those comments about his penis. I thought, ‘wow, we knocked Donald Trump’s penis off the air!”

With The People v. O.J. Simpson wrapping up, Karaszewski admits that he and Alexander are producing the second season of American Crime Story, but that they’re not writing it. They also currently have feature projects at Amazon and Netflix. “We had an amazing time on this show and we do have other TV projects in mind, but nothing that we’re ready to talk about just yet. But, from this experience, I can tell you that as a writer, we’ve really grown to love the medium and the way that it allows for exponentially layered storytelling. That’s a huge drawn for us and certainly for every writer who wants to tell great stories.”

All episodes are also available via the FXNow streaming channel. 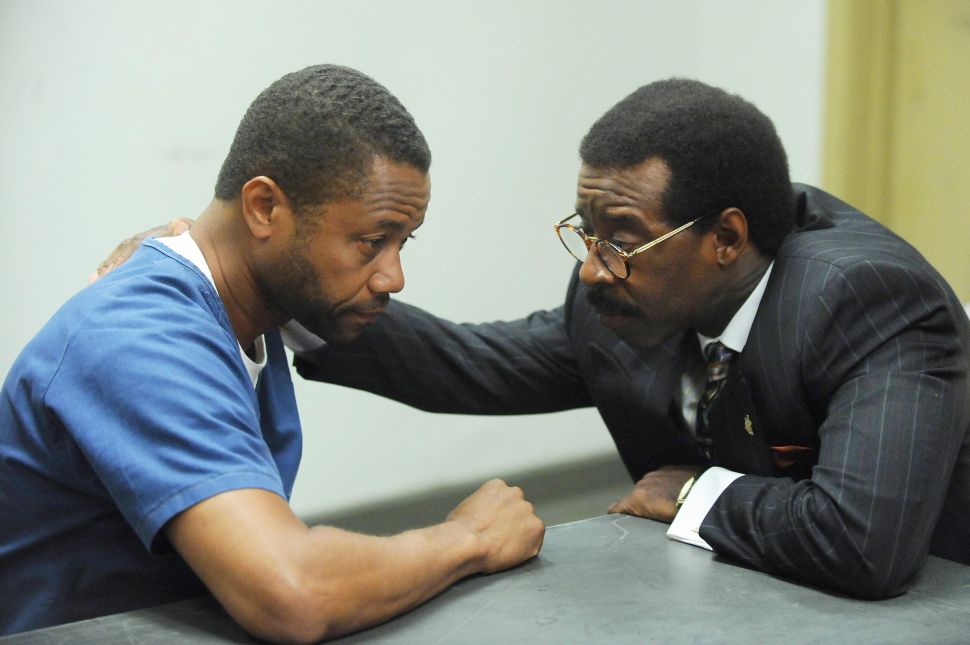