Over the weekend a sensational spy saga appeared in the media, one that the U.S. Navy managed to keep out of the headlines for the last eight months. The Department of the Navy revealed that a career officer has been sitting in a brig in Norfolk, Virginia for months, suspected of espionage on behalf of a foreign power. Although the indictment was heavily redacted, it was obvious that the accused has done serious damage to our national security, not least because the charges—including communicating secret information “relating to the national defense to representatives of a foreign government”—could carry the death penalty.

It did not take long for reporters to uncover that the country the suspect stands accused of spying for is China, and the officer in custody is himself of Chinese origin. Neither of these facts can be considered shocking by those familiar with counterintelligence. Beijing spies aggressively on the United States, especially our navy, which is the major obstacle to China achieving its strategic goals in East Asia, while they mainly stick to their ethnic milieu in espionage. Indeed, Chinese intelligence operations against America that do not involve persons of Chinese origin or extraction are very much the exception.

The accused is Edward Lin, a career Navy officer, a lieutenant commander (equivalent to a major in our other armed services) and a naval flight officer. A graduate of the Naval War College who served as a navy liaison to Congress, his career was clearly going places. Particularly troubling is the fact that Mr. Lin spent much of that career assigned to maritime reconnaissance units, in other words squadrons that fly spy planes. He was assigned to very secret special units that collect signals intelligence from modified P-3 Orion patrol aircraft. In other words, Mr. Lin had to be a goldmine for Beijing, since he could reveal highly classified information regarding what the navy and American intelligence know about China.

Mr. Lin’s background, as an immigrant from Taiwan, may have rendered him vulnerable to exploitation by Chinese spies. Only a few years ago, navy public affairs ran a puff piece about the rising young officer, a feel-good story about an immigrant who worshipped us from afar—“I grew up believing that all the roads in America lead to Disneyland,” Mr. Lin explained—and became a patriot for his adopted homeland. Yet it seems his real loyalties were not to this country and Mr. Lin’s saga is unlikely to lead to anything as happy as Disneyland.

The redacted indictment does not reveal how Mr. Lin came in contact with Chinese intelligence, though his being charged with cavorting with prostitutes offers tantalizing hints, while it makes clear that a good deal of intent was involved. He is accused of not revealing unauthorized foreign contacts to navy officials, as holders of high-level security clearances are required to do, while the mention of unreported foreign trips reveals that Mr. Lin was meeting with Chinese handlers outside the United States. Such clandestine meetings are standard for high-value spies who may be too risky to meet with on American soil.

We know nothing yet about what Mr. Lin told Beijing, but the unusual degree of secrecy surrounding this case, with the lieutenant commander stashed in the brig for months without press notification, indicates that the navy thinks the damage must be severe indeed. Worse, it is impossible to write the Lin debacle off as some sort of ugly aberration, as navy leadership will want to do. In truth, it’s been evident for several years that the U.S. Navy has lost control of its own security, a development with worrisome ramifications far beyond our navy.

Although our military is accustomed to ‘different spanks for different ranks,’ this strange situation reeks of privilege and double standards.

Ominous warning signs have appeared throughout the Obama presidency. When the Washington, DC Navy Yard fell prey to a spree killer in September 2013, leaving a dozen dead plus the shooter, the killer was a navy civilian employee with a history of mental illness including police involvement, and also a secret-level security clearance. Although police reported these incidents, navy security took no action, and the shooter remained able to work and enjoy access to military bases—with fatal consequences. It was evident something was seriously amiss with the navy’s security clearance process.

Just how broken that system actually is has been revealed by several cases since then. Last fall, Mostafa Ahmed Awwad, a navy civilian engineer, was convicted of passing secret information about the navy’s newest aircraft carrier, the USS Gerald R. Ford, to an Egyptian intelligence officer. Rather, to someone Mr. Awwad thought was an Egyptian spy. In reality, it was an FBI agent working undercover: the traitor was stopped before he could actually betray secrets. Left unasked in all this was how Mr. Awwad, a native of Saudi Arabia, got work as a navy engineer with security clearances when his loyalty was clearly not to the United States.

It happened again this February when another navy civilian engineer, James Robert Baker, was charged with repeatedly lying to his employer on his security clearance paperwork. Mr. Baker, who worked for the navy for three decades, was born Majid Karimi in Iran. Over thirty years, Mr. Baker lied flagrantly about his true biography and life events, including the fact that he still possessed an Iranian passport that he traveled on long after taking a job with the navy, a clear violation of security rules.

Worse, Mr. Baker had multiple identities plus significant unexplained affluence—in one case, the shifted around more than $130,000 illicitly. To anyone versed in counterintelligence, it all reeks of foreign intelligence operations. Left unasked here is how an immigrant from Iran, a country that represents one of the biggest threats to the United States—not to mention a top espionage risk—managed to get navy employment and security clearances in the first place, then broke numerous basic security regulations for three whole decades without getting caught.

Ties of ethnicity and foreign affinity are legitimate grounds for security inquiry. Countries like China, Iran and Russia, top spy threats all, routinely try to co-opt their nationals who have emigrated to the United States. Yet the mind boggles at the perversity of a navy security system that denies clearances to American Jewish dentists who join the service out of patriotism, but have relatives in Israel, yet allow dishonest Iranian immigrants to work on secret programs for 30 years. Something is very wrong here.

And that rot goes deep. Just how bad things really are inside the U.S. Navy was unmasked by the Fat Leonard scandal, which has roiled the service for years now. This was a multinational financial scam led by Glenn Leonard Francis, a Malaysian entrepreneur whose girth gave this scandal its memorable name. Mr. Francis, owner of Glenn Defense Marine Asia, a Singapore-based maritime repair firm, realized he could maximize profits by arranging for the U.S. Navy to steer lucrative repair contracts away from low revenue ports like Singapore and toward “fat revenue” ports like Phuket in Thailand. Since the navy’s Seventh Fleet is very busy in the waters off Southeast Asia, its ships needing regular maintenance, Fat Leonard’s profits were impressive.

A clever fellow, he illicitly steered contracts his way by recruiting a whole cadre of U.S. Navy officers, some alarmingly senior, to spy for him. He won them over with liquor, cash, prostitutes and favors—in one case, in a touch worthy of a Coen brothers movie, tickets to a Lady Gaga concert. The Naval Criminal Investigative Service, which is supposed to prevent these sorts of illegal shenanigans, was slow to act, perhaps because one of Fat Leonard’s top sources was a senior NCIS agent. John Beliveau, who recently had been named NCIS agent of the year, informed Fat Leonard about the progress of the investigation into the scandal, among other secrets—allowing the scam to continue for years longer than it should have.

Once the story hit the media the game was over, leaving several wrecked careers in its wake. To date, eight navy officers and officials have pleaded guilty to a range of charges relating to the scandal, aspects of which remain unexplained. The whiff of foreign intelligence behind Fat Leonard lingers—China is often mentioned—but it’s no wonder that the navy is not interested in discussing that.

Most embarrassingly, three admirals were censured by the Department of the Navy for their role in the Fat Leonard mess, while one top admiral remains under a cloud for his role in the scandal. That’s Vice Admiral Ted Branch, who inconveniently happens to be the director of naval intelligence. Mr. Branch had his security clearances suspended in November 2013, since navy leadership expected he could be indicted for his dealings with Fat Leonard. Mr. Branch remains unindicted yet, somehow, still works as the head of U.S. Navy intelligence, despite the fact he has no security clearances.

Normally, any sailor under investigation has his or her clearances suspended and is assigned to a non-sensitive post, pending the outcome of said investigation. Rules are different for admirals, apparently, since Mr. Branch remains on the job, more than two-and-a-half-years later, unable to read or be briefed on what “his” command is actually doing. The navy refuses to find a replacement for Vice Admiral Branch, this strange and unprecedented situation notwithstanding.

Navy Secretary Ray Mabus has bizarrely insisted that naval intelligence is doing just fine, despite its boss having no security clearances, while some in Congress understandably have questions, not least because Mr. Branch’s deputy also had his clearances suspended over the Fat Leonard scandal. Although our military is accustomed to “different spanks for different ranks,” this strange situation reeks of privilege and double standards.

The developing saga of Lieutenant Commander Lin, accused of espionage for China, promises to reveal disturbing details of how a navy officer went badly wrong. Comparisons to John Walker, the navy traitor who betrayed reams of secret information to the Soviet Union at the height of the Cold War, inevitably come to mind. However, the navy’s deep-seated problems with basic security and protecting our nation’s secrets extend far beyond a rogue officer or two. This is a systemic crisis now, one which demands comprehensive reform. Citizens and taxpayers should demand no less, since the U.S. Navy, which once boasted brave skippers willing to go down with the ship rather than reveal secrets, is clearly incapable of reforming itself on this critical issue. 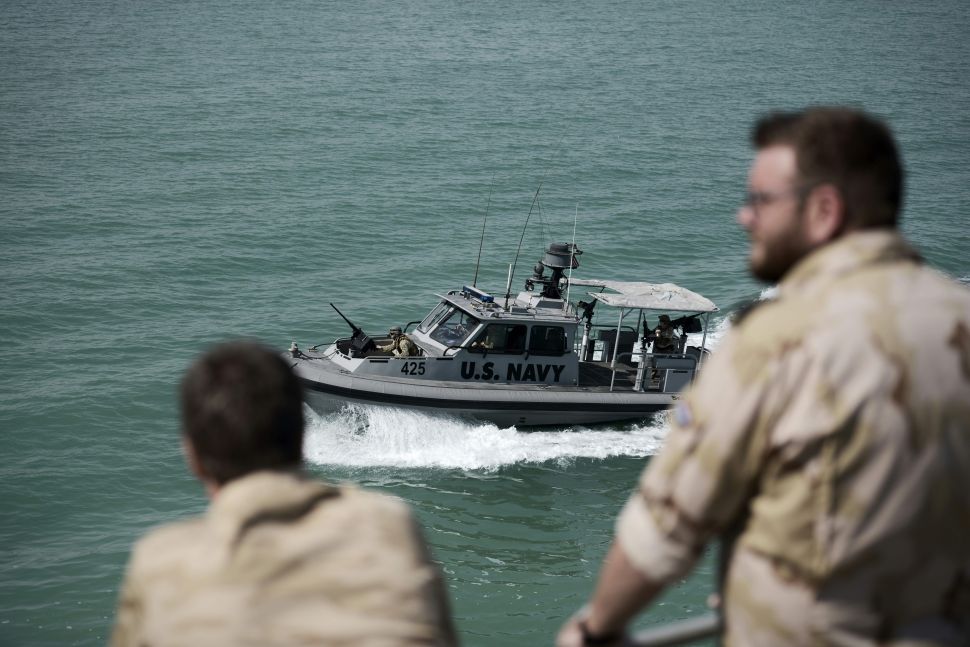