As confused commuters hurried past, some stopping to snap a few cell phone pictures before rushing to catch the incoming G train, Matthew Christian stood among subway musicians wearing a shirt that read “Music is legal.”

Mr. Christian is one of the co-founders of Busk New York, an organization that advocates for subway buskers, or street performers. Founded in 2013, it tries to “facilitate and encourage people to sue” if they’ve been wrongfully arrested, Mr. Christian told the Observer.

On Saturday, Mr. Christian gathered performers and journalists at the Metropolitan Avenue G stop in Brooklyn to announce that artists connected to the group had collected $120,000 in wrongful arrest settlements, including Andrew Kalleen, whose 2014 arrest has been viewed over 1.5 million on Youtube. Mr. Kalleen, along with Jadon Woodward and James Gallagher, was awarded $54,500 in a settlement.

“Many police do not know about that, many MTA officials do not know about that right,” Mr. Christian said, referring to the Section 1050.6 of subchapter D in the MTA section of the city’s Codes, Rules, and Regulations book, which specifically permits “artistic performances, including the acceptance of donations” as long as they don’t “impede transit activities.” Mr. Christian hands out copies of the document to buskers.

“I know that people in racially charged situations have a fear of police officers when they see them, a feeling of ‘what am I doing wrong?’,” Mr. Kalleen, a Californian transplant who began busking full-time four years ago, told the Observer. “I understand that more now, having gone into a situation where there is a bit of an oppressive situation between police officers and buskers.”

Asked if he thought that the settlements and scrutiny had been able to dissuade police officers from harassing performers, he said that “it was seeping into [police officers’] consciousness that ‘we can’t act with continue to act with impunity, and it’s not right to,’ but it’s “not clear that it’s making a dramatic effect. There’s still definitely a severe power dynamic.”

“Originally, I didn’t even want to file this lawsuit,” Mr. Woodward said. “I’ve been arrested mad times […] I really wasn’t expecting to win. I didn’t even think we had a chance to tell you the truth.”

Mr. Gallagher, a friend and fellow performer arrested alongside Mr. Woodward, told the Observer he felt that the police had targeted Mr. Woodward, who is 25 and African-American, based on his appearance.

“They checked and saw that we didn’t have any outstanding warrants, and [the officer] was like ‘they don’t have any warrants? Run ‘em again.’ Like, ‘young black male, must have warrants,’” he said.

Theo Eastwind, a longtime busker who said he’d been arrested “many times,” was puzzled that the police would want to crack down on buskers. “Subway musicians make the subway safer,” he said, adding that if someone didn’t like the music, “it’s their right to hate it.”

Asked why he had started busking, Mr. Woodward said ending up in New York and sharing his music on the subway was a way of getting out of the “rough neighborhood” he had grown up in in California. “All my friends were ending up dead and in jail […] My mom said, ‘you’ve got to get out of here.’” 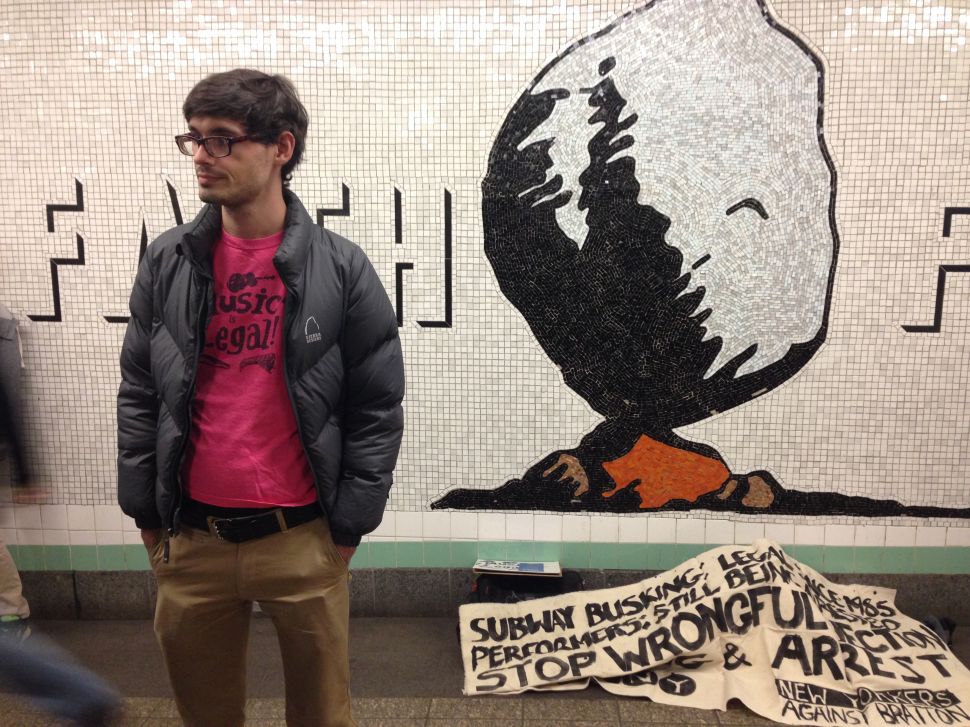