Kennedy Space Center, FL – As part of the continuing strategy to partner with private companies and help stimulate the commercial space industry, NASA has agreed to attach an experimental expandable habitat module to the International Space Station that can potentially be used as an additional living or work space for astronauts. The installation and testing of this module will be a springboard to develop deep space habitats that will one day orbit the Moon and protect humans on the journey to Mars.

Built by Las Vegas-based manufacturer Bigelow Aerospace, the BEAM (Bigelow Expandable Activity Module) will be flown up to the orbiting laboratory on SpaceX’s Dragon capsule that is expected to liftoff tonight from Cape Canaveral Air Force Station for Cargo Resupply Services Mission 8 (CRS-8).

Once the Dragon reaches the station, the BEAM will be moved and installed to the Tranquility Node of the ISS by mission control in Houston who will remotely maneuver the Canadarm2. This will be the first time an expandable module of any kind will be attached to the station so the crew will have to work carefully to install and expand the BEAM.

After the BEAM is expanded to provide an extra 565 cubic ft of space, and over the course of two years, the crew aboard the station will run tests to determine how this first-of-its-kind expandable module performs in the vacuum of space and address the many concerns associated with human spaceflight.

Key items that would be included in validating the BEAM’s overall performance include reaction to temperature changes, shielding from space radiation, and how it will withstand contact with micrometeoroids or other types of debris. Astronauts will actually occupy the BEAM for a couple of hours on planned tests that will occur three to four times a year. The data collected will then be used to improve the design for future habitats.

With the goal of developing sustainable habitation systems that can provide safe space-based work environments, living quarters and laboratories, the BEAM—which weighs less than traditional modules and require less cargo space for transport—is essentially being used as a test platform to help determine durability, structural integrity, and the overall design performance of expandable habitats.

BEAM’s two year stay at the space station will certainly determine if an expandable habitat module would be a viable option for long-duration spaceflight and deep space missions. For a preview of what could follow this experiment and how Bigelow Aerospace envisions their role a possible provider of habitats for NASA during their return to manned exploration of the solar system, we spoke briefly to the President of Bigelow Aerospace, Robert Bigelow.

NASA is currently looking for a habitat to assist with exploration missions in lunar orbit. Is Bigelow Aerospace one of the competitors vying for a contract to build a deep space habitat that will orbit the moon?

We have submitted a version of a deep space habitat that we call EMMT—Earth Moon Mars Transporter and it can be various sizes and the particular presentation we were given were constrained. We had to shape this spacecraft to a size that would initially fit as a secondary payload under the Orion on a Space Launch System. We really had to shrink it down but these are terrific transporters.

Is it a goal for Bigelow Aerospace to provide a habitat that will take humans to Mars?

I think so. Our philosophy is try to test everything we can. First, close to home because we don’t want any suicide missions. The moon is a perfect testing ground for a really dangerous environment and If you can successfully do a lot of things there, you can learn a lot that would be valuable to bases and human habitats on Mars.

Regarding radiation, How does the “expandable” material stand up against radiation compared to the harder materials currently used in most spacecraft?

The mere fact that it’s not aluminum is a huge plus. Once you’re out of the earth’s magnetosphere, and you are in an aluminum can—you are in serious trouble. Protons react violently with aluminum and vice versa so it would destroy the cells in your body much more quickly if you are in a structured aluminum can. Our aluminum percentage is very small. We only have aluminum bulkheads and hatches.

So the first step Bigelow is taking to tackle the problem of radiation is using different material used in previous spacecraft?

Yes. It’s soft goods. In low-Earth orbit you don’t have to worry so much.

Well, in terms of lunar orbit, Is there going to be a capability on a Bigelow habitat for a solar storm shelter?

Our intent is to fly tiles and populate the circumference of the interior of the spacecraft hull with these tiles and when solar storms come along, you can take these off, build an enclosure that could be 4-5 tiles thick and everyone would get inside that for whatever period of time until the storm passes. That is a pretty good way. 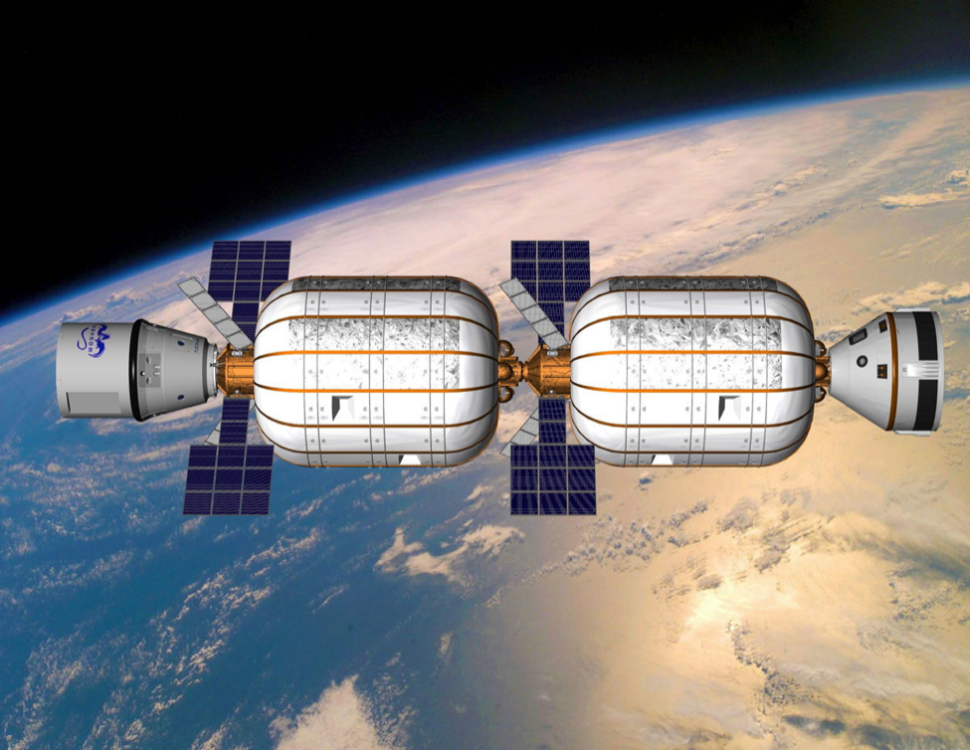