Bernie Sanders had a few questions for his rabid supporters on this bitter April afternoon in Brooklyn.

Is his apartment still rent-controlled? Does anybody still play punch ball?

“Does anybody know that?” Mr. Sanders, standing on a stage erected mere feet from his childhood apartment building, asked.

The hundreds of sign-waving Sanders supporters murmured something approximating “no.”

Mr. Sanders, a Vermont senator, fled Brooklyn for the University of Chicago and later the Green Mountain State, climbing the rungs of power and never looking back until his home borough, the place that bequeathed him such a resonant accent, came calling again. With New York’s Democratic primary less than two weeks away, and Mr. Sanders, a self-described democratic socialist, trying to pull off the ultimate upset over Hillary Clinton, a former New York senator, a little leafy block between Avenue P and Kings Highway became a staging ground for an impromtu campaign rally.

Presidential candidates will rent out gymnasiums, convention centers, parks and even airplane hangars for rallies, but it’s the rare contender who shuts down the block he grew up on to say a few words to his fans. Barricading off East 26th Street in a section of Brooklyn most would call Midwood, but was simply a slice of amorphous Flatbush in the 1940s and 50s when he lived here, Mr. Sanders stood outside the tan, understated apartment building he called home until he spent a single unhappy year at Brooklyn College.

“We used to have sewers around here where we played marbles and if you knocked the marble going down the hole, you would get ten marbles back,” he recalled, speaking into a microphone as wind whipped around him. “This was a great community to grow up in.”

After actor Mark Ruffalo introduced him, Mr. Sanders, who grew up in apartment 2C, bounded out of 1525 East 26th Street with his wife, Jane, to take the stage as supporters chanted “welcome home.” They skewed young, as Mr. Sanders’ voters often do, with students from nearby Brooklyn College and Kingsborough Community College mixing in. A few onlookers hung Bernie signs from fire escapes or just peered out their windows to catch a glimpse of the presidential circus which had, a bit unexpectedly, rolled down their block.

“Growing up here I learned the major lesson that I’ve ever learned in my life about economics, that there are millions of families in America today who struggle every single day to take care of their families,” Mr. Sanders said before cycling through his typical talking points: the rich are getting richer, we need to give everyone free healthcare and college tuition, and the climate change threat is dire.

The difference was simply that he was home and there were hundreds, instead of 18,000 or so, to greet him. Though he wouldn’t admit it now, with his legions of fans clustered in Brooklyn, Mr. Sanders has always had an ambivalent relationship with his hometown. He has happily visited his alma mater, James Madison High School, which lies a block away from his old apartment, but Brooklyn will always be the place he escaped from to jumpstart his life elsewhere, in its antithesis: a rural, sparsely populated state, where life moves slower and people are friendlier. The city Mr. Sanders once governed, Burlington, is half the size of many Brooklyn neighborhoods, and Kings County alone is several times the size of Vermont. It was in Brooklyn where his parents died young and he told friends he felt stifled; had he remained, he once quipped to a reporter, he would’ve probably ended up a state assemblyman.

The people who now populate Mr. Sanders’ old block and neighborhood will probably not be voting for him. Midwood is a heavily Orthodox Jewish, and an increasingly conservative, enclave, and the homeowners who wandered outside to take in the spectacle had little affection for the Vermont senator. Mr. Sanders is Jewish, of course, but his criticisms of Israel’s conduct toward the Palestinians rankled locals.

“Israel is obviously a big, big thing on people’s mind. Bernie had only revealed very sparingly what his foreign policy was until very recently and his recent comments enraged a lot of people around here,” said Mitchell Eisenberger, an attorney who lives on East 26th Street.

“The Democratic Party is moving towards socialism, maybe even communism, and I maybe have an issue with that,” said Charles Kryksman, another resident on the block.

“Just because he’s Jewish doesn’t mean people will vote for him,” his wife, Ettie Kryksman, chimed in. “He doesn’t support Israel … Aside from that, I also think all these free things that he’s advocating are gonna cost somebody money. They’re not gonna be free.”

Back at the rally, among the Sanders faithful, one man asked the Vermont senator about certain baseball team which, like Mr. Sanders, fled Brooklyn more than a half century ago for greener pastures.

“What about the Dodgers?” the man shouted as Mr. Sanders shook hands across the barricades.

“It was a great blow when they left,” he replied. 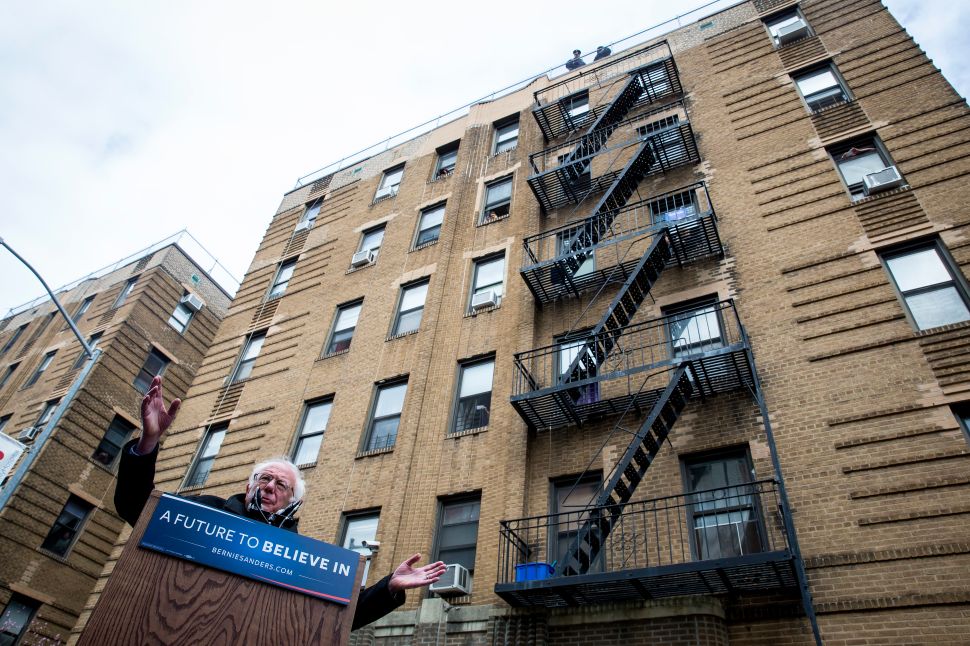