In the late afternoon, bearded millenials in beanies and scarves massed around WNYC Transmitter Park in Greenpoint, Brooklyn, despite brisk winds and dour skies.

Vermont Sen. Bernie Sanders, the underdog Democratic presidential candidate, had picked the riverside spot for the second half of a double-header of rallies held today in the borough of his birth. The first was in the cozy, conservative Jewish community he grew up in, Midwood. Greenpoint, on the other hand, was once a working class enclave of immigrants from Mr. Sanders’ father’s native Poland, but has now transformed into a high-cost bohemia—ripe with the self-described democratic socialist’s prime voters.

“I think we’re all here because Bernie Sanders is the most authentic candidate for president that we’ve seen in a very long time,” local Democratic district leader Nick Rizzo, one of the few party figures to back the senator, told the Observer. “Healthcare is a right. Having a job, frankly, is a right. And we’ve got a new generation that recognizes this.”

Various “revolution”-themed tunes played over the PA system inside the park, and an hour before the speech was set to start, the smell of marijuana wafted off the crowd. Enthusiastic backers were still trickling through the security checkpoints when actress and activist Susan Sarandon stepped up on the dais to introduce Mr. Sanders.

“We need New York,’ she told the crowd, acknowledging that the senator would have a tough fight in the state where front-runner Hillary Clinton resides and which she represented in the Senate for eight years. “You, no matter what happens, are on the right side of history.”

The sun finally breached the clouds as the candidate approached the podium, silhouetting his stooped figure against the glitter of the East River and the grim fortifications of housing projects along the Manhattan waterfront.

“You know, I am enormously proud to be senator from the state of Vermont, but I have not forgotten where I was born—and that is in Brooklyn,” he said in his unvarnished Kings Highway accent, as the audience exploded in applause.

The crowd reacted ecstatically as the candidate rattled of every item on his left-wing wishlist: dismembering major financial firms, instituting a universal $15 an hour minimum wage, ending the war on drugs, socializing healthcare, mandating pay parity across genders, creating a public finance system for campaigns, obligating states to dismantle their voter identification laws.

“Don’t let anybody tell you that we cannot transform America. That is the history of our country: people standing up against the odds,” he said. “Let’s win here in New York, and let us make the world know, that this great, New York, is part of the political revolution.”

Polls show Mr. Sanders eating into Ms. Clinton’s lead in New York State, but he faces long odds of beating her in Brooklyn. Virtually all the leaders of the borough’s formidable black, Hispanic and religious Jewish populations have endorsed the former first lady, and it is unlikely Mr. Sanders’ support among secular liberal whites is enough to overcome that disadvantage.

And, despite a string of recent primary wins, Mr. Sanders would need a landslide victory in New York and every forthcoming state to overcome Ms. Clinton’s 250 pledged delegate edge, and her lead of 438 among the superdelegates—the party insiders who attach to the candidate of their choosing. Nonetheless, those who poured into the north Brooklyn park held onto their optimism.

“This is his home borough, everyone’s here because they’re ‘feelin’ the Bern,’ and I feel at the end of the day, Brooklynites will come out to support one of their own,” Brooklyn Councilman Rafael Espinal, the lone member of the City Council to endorse Mr. Sanders, told the Observer. “It’s up to us here in New York, I think, to show that Bernie Sanders could be our next president.”

The New York primary is on April 19. 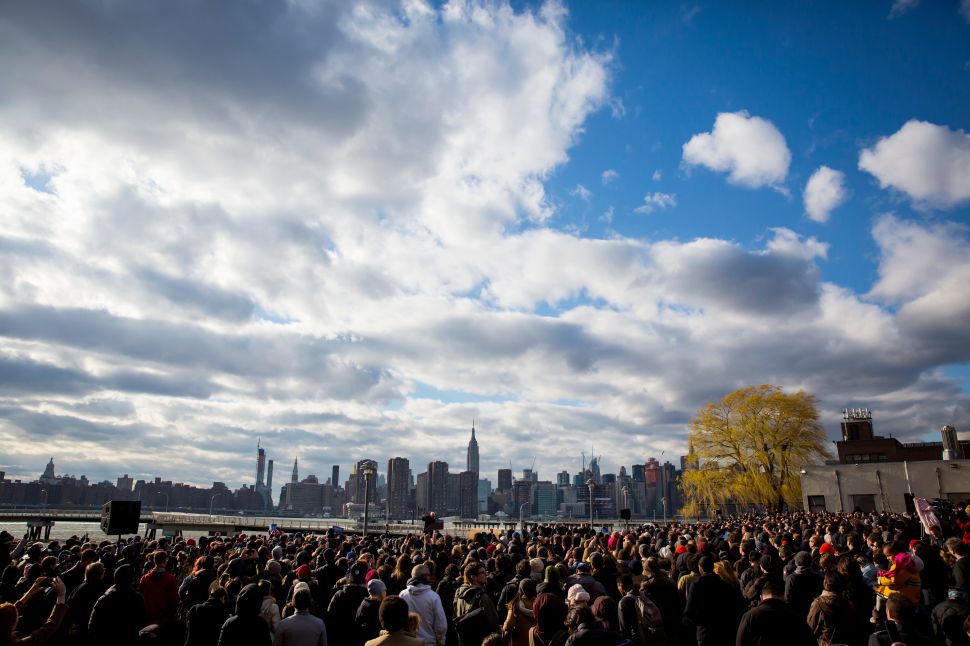