On the eve of New York’s primary elections, Democratic candidate Sen. Bernie Sanders made his pitch to New Yorkers—and exhorted them to get out and vote tomorrow—one last time at a rally in Queens.

“My experience has been, in this campaign so far, is that we win when the turnout is high. We lose when the turnout is low. Tomorrow, let us all do everything we can to make sure that New York State has the largest turnout in a Democratic primary in its history,” Mr. Sanders, of Vermont, told the cheering crowd in Long Island City. “Tomorrow, New York State can help take this country a giant step forward for the political revolution. Let’s do it.”

Hillary Clinton, the former secretary of state, has the vast majority of the state’s institutional support and endorsements, and leads Mr. Sanders in the Democratic polls here. She is expected to beat Mr. Sanders tomorrow—but if Mr. Sanders can come close to Ms. Clinton, the establishment choice and New York’s former senator, he’ll likely claim a moral victory.

Mr. Sanders, who delivered a mostly standard but well-received stump speech, has been able to turn out tremendous crowds to his rallies in New York City, though tonight’s was much smaller than recent events in Prospect Park and Washington Square Park. It remains to be seen, however, if the people who show up at his rallies will turn out to vote for him tomorrow—or whether they will be eligible to do so. The candidate is popular with college students, who may be registered elsewhere, and newcomers to politics, who may not have registered ahead of New York’s March 25 deadline. Perhaps more problematic for Mr. Sanders here is his base of independent voters who, like members of the liberal Working Families Party and other third parties, will not be able to vote in the state’s closed Democratic primary. (Members of other parties had to change their registration to Democratic by October to vote in tomorrow’s election.)

Despite Mr. Sanders’s optimistic pitch to the crowd, he won’t be in New York tomorrow when the state’s results come in; he is heading to Pennsylvania instead. Ms. Clinton, meanwhile, will host an election night event in Manhattan.

Tonight, the Brooklyn-born Vermonter sought to paint Ms. Clinton’s success as a result of a “corrupt campaign finance system,” and yet again called on her to release the transcripts of paid speeches she gave to Wall Street firms like Goldman Sachs.

“I will release all of the transcripts of all of the speeches that I have given behind closed doors to Wall Street. Are you ready?” he asked to cheers. “Here they are: none.”

Mr. Sanders took the stage at dusk, after the sun sank below the Manhattan skyline towering across the East River, fit for a postcard. Several thousand people crowded into a park in the hip neighborhood, many of them young and white, though there was at least a smattering of Queens’ celebrated diversity. Brooklyn indie band TV On The Radio performed, and a concession booth sold cold-brew iced coffee, craft beer ($8.50), and wine ($9, choice of rosè, prosecco, pinot grigio or pinot noir). A sign beside the stand promised: “Bernie [Hearts] Beer (Probably).”

Mixed in with the hipsters and the hippies and the yuppies were red-shirted members of the Communications Workers of America who are striking against Verizon. Mr. Sanders has visited the union workers twice while campaigning in the city, and met with members upstate when they made the decision to strike, their political director Bob Master noted when he spoke at the start of the rally.

Those workers lent Mr. Sanders’s sermon about the ills of corporate America a local twist.

“Verizon is just the poster child for what corporate America is doing to families,” Mr. Sanders said, saying the company makes huge profits and wants to outsource jobs, cut wages and benefits.

That would change, he argued, if he were president.

The rally followed a busy day for Mr. Sanders, who dropped into neighborhoods like Astoria and Jackson Heights to walk the streets and talk with voters. He picked up a new endorsement, from Councilman Ritchie Torres, who had challenged both Mr. Sanders and Ms. Clinton to visit public housing. (Both did so in the last few days.) Mr. Torres’ backing comes a day after Councilman Jumaane Williams endorsed Mr. Sanders from the stage at a massive Prospect Park rally. 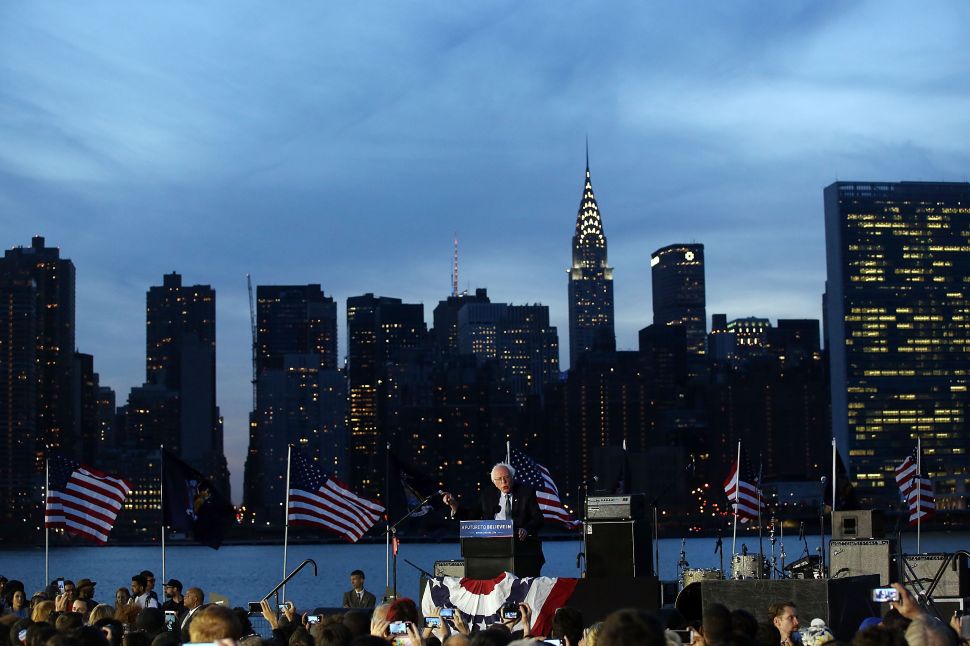