The underdog Democratic candidate for the White House toured NYCHA’s Howard Houses in the impoverished enclave of Brownsville, Brooklyn with Borough President Eric Adams, Bronx Councilman Ritchie Torres, chairman of the City Council’s Committee on Pubic Housing, and Brooklyn Councilman Jumaane Williams, chairman of Committee on Housing. The Brooklyn-born New England lawmaker described learning about the depth and severity of NYCHA’s budget shortfalls at a huge powwow in Prospect Park that afternoon.

“We have a $17 billion backlog in construction needs. We have community centers for kids that are closing down,” the candidate said, provoking boos from the racially mixed but predominantly white crowd. “And that is why together we are going to transform our national priorities. We are going to rebuild inner cities in this country, rather than waste trillions on wars we never, ever should have gotten into.”

The campaign unveiled the outline of a national affordable housing plan to coincide with the rally. The proposal includes a promise to provide “sufficient funding” to deal with the epidemic of “leaky roofs, mold, unreliable heating systems, broken elevators and vermin.”

NYCHA is the largest housing authority in the country, and its capital improvement deficit makes up roughly two-thirds of the $26 billion in infrastructure work needed at all public housing in America.

State and city money built most of New York’s public housing stock, but the 334 developments and their 400,000-plus residents have become increasingly dependent on diminishing federal funds since the Carter administration. To cope with the shrinking subsidies, both former Mayor Michael Bloomberg and current Mayor Bill de Blasio have sought to generate revenues through “infill”: building new apartments on open NYCHA parcels.

Such proposals have enjoyed a mixed reception at best.

Mr. Sanders’ proposal would also obligate all landlords receiving money from the federal Department of Housing and Urban Development, a category that includes NYCHA, to make their developments lead-free. U.S. Attorney Preet Bharara’s office has subpoenaed thousands of pages of documents related to the authority’s lead-remediation efforts, among other operations, as part of a probe of potential fraud.

As with many of the self-described democratic socialist’s plans, the outline released today is light on figures and details. It does, however, promise to create a permanent $5 billion annual allocation for the National Affordable Housing Trust Fund, an all-but-dry reservoir of federal funds that Mr. Sanders helped create in order to build and renovate extremely low-cost housing.

Former President George W. Bush signed the National Affordable Housing Trust Fund into existence in 2008, but it did not receive its first tranche of money—$174 million—until this year. President Barack Obama sought to allocate $1 billion to the program in 2011, but congressional Republicans blocked the move.

Federal guidelines currently prevent money from the NAHTF from going into housing authorities—unless that money is for rehabbing public housing apartments as part of converting them into Section 8 units under the federal Rental Assistance Demonstration program. NYCHA currently hopes to utilize the RAD program to turn 1,400 of its apartments in Queens to Section 8 units, which draw on a different, more stable stream of HUD funding than housing projects.

It is unclear how Mr. Sanders would convince a Congress long reluctant to provide funding for urban concerns to set aside so much money.

“This campaign is listening to our African-American brothers and sisters,” said the candidate, who has struggled to attract support from minorities.

Mr. Williams formally endorsed Mr. Sanders at the Prospect Park rally. The Brooklyn borough president thanked the candidate on Twitter, noting that he had urged both Democrats to visit Brownsville as part of their campaigns in the Empire State. 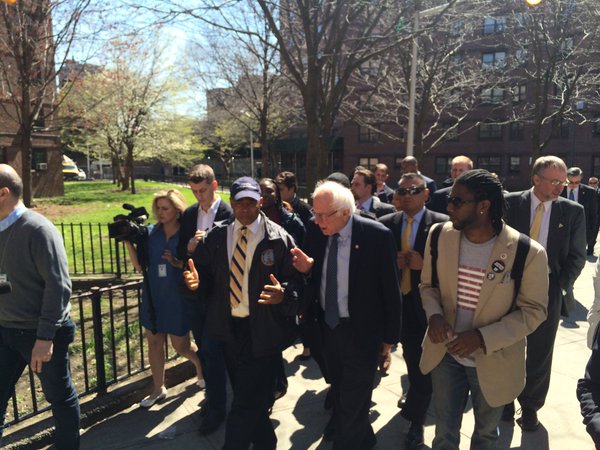