Did Larysa Kondracki just have her Cary Fukunaga moment? The director of “Fifi,” last night’s Better Call Saul, opened the episode with a single four-minute-plus shot that swirled and soared around a border crossing and the drug-courier truck attempting to pass through it every bit as complex and stunning as the multi-minute gang shootout that made Fukunaga a superstar on True Detective. But that famous sequence ended its episode. This was one was merely the beginning of an hour of some of the most carefully composed, strikingly shot, drop-dead gorgeous television of the year. With frequent BCS cinematographer and Breaking Bad veteran Arthur Albert riding shotgun, Kondracki crafted a visual achievement to rival anything on either of those shows—or Mr. Robot, Hannibal, and any other compositionally audacious series of recent vintage you’d care to name. Forget Jimmy McGill and Kim Wexler: Larysa Kondracki should be the one setting up her own shingle.

It’s actually difficult even to know where to begin describing the episode’s strengths, but the beginning’s as good a place as any. Once we return from the very very Breaking Bad opening sequence, we’re firmly back in Better Call Saul territory, as Kim and Jimmy, framed small at the bottom of the screen beneath the glowing neon lights of a weiner joint called the Dog House, dwarfed by the night around them, discuss her coming resignation from Hamlin Hamlin McGill. When that moment comes, it’s just as rigorously laid out: Kim framed off-center as she waits to meet with Howard, the receptionist to the other side. Once she talks her way through Hamlin’s attempted brushoff and makes her way into his office, they’re framed symmetrically in facing chairs, early twilight leaking through Howard’s horizontal blinds to coat them with light. It’s a rare moment of parity for these two, as Kim’s now-former boss promises to pay off her the remainder of her student loans as a parting gift, tells her with apparent sincerity that “I always pushed you harder because I knew I could expect more from you,” and lets on just as sincerely that in some ways he envies her “fresh start.” He too once dreamed of starting his own practice, until his father talked him out of it, convincing him to “add one more H” to the preexisting partnership with Chuck McGill. “Things work out the way they’re supposed to, I guess,” he says, a bitter smile frozen on his face. It’s actor Patrick Fabian’s finest moment on the show, and it’s just one of the scene’s many pleasures. Indeed, the subsequent scene, in which Kim races across the office to her phone in an attempt to wheedle her big banking client Mesa Verde away from the firm with her before Howard can sink in his hooks—she’s framed so slow as she whizzes through the cubicle farms that she’s visible nearly only from the neck up—is so breathless and visually communicative you might not even have noticed.

As Kim, Rhea Seehorn too is given her best showcase to date. When she shows up at the dentists’ office Jimmy is hoping to purchase and refurbish into their shared workspace following her Mesa Verde meeting, she seems out of it, even distraught—shortsighted to the left of the frame, boxed in by the graphically intense double rectangles of the office’s dual doors and the inescapable square-panel windows, all of which contrast strongly with the springy spiral of her ponytail. But she’s not upset, she’s overwhelmed with happiness, since she thinks she knocked the meeting out of the park. Watching her transform into an excited kid before our eyes after a season and a half of workaholic reserve and frustrated ambition, running on and on with glee as she brags to her boyfriend and semi-partner about her success, the shortsighting switching from a visual metaphor for isolation to a method of bringing her closer to Jimmy than ever…it’s joyous and touching and, ultimately, heartbreaking, since no good can come of hitching her star to this man’s wagon.

Yet another masterful performance is in the offing as well. Howard comes to Chuck’s house—where, as always, the man is alone in the dark, lit like a damn Dutch Master—hat in hand, begging the senior partner for his help in convincing Mesa Verde to stay. The talk in front of McGill’s double doors to the outside world, the sunlight hitting their profiles as if lighting their edges on fire; they talk through the mirror on the door of Chuck’s closet as he picks out his best, non-tinfoil-lined suit and insists on coming into the office and dealing with the matter directly, lights on, cellphones in hand. An overhead shot shows his car pulling into the circular driveway for the firm. A high-angled view of his cavernous office makes him look small compared to the vast blue edifice his talent once helped construct. The trademark diagonals of the big HHM staircase force him to zig and zag his way through a firm full of lookie-lous, reacting to his presence in the office in the middle of the day with disbelief. Finally, the lighted arches of the conference-room table set the stage for his triumphant sales pitch, a masterpiece of reverse psychology in which he facetiously encourages the bank to go with Kim, since an old man like him is too hopelessly mired in his decades of meticulous study of and experience in banking law to keep up with the new kids. The speech is so clever and funny, and such a breakthrough for a character you’re pulling for to transcend his mental-health issues despite all he’s done to impede our heroes, that Howard says it best: “Chuck, that was amazing.” It really was.

The end result of these two scenes arrives with a crash cut. We’re with Saul—ha, I wrote that name instinctively here—with Jimmy, in the middle of conning the staff of an Air Force base into letting him shoot a commercial on its tarmac with an “infirm” “war hero” who turns out to be some perv he got off the hook for public masturbation. (“Total bullshit!”) One moment, he’s got the old dirty bastard wheeled in front of half a dozen guys in uniform, saying cheese for the camera as a fighter jet roars overhead, a perfect image of phony overinflated patriotism; the next, we jump to a silent shot of Kim, face shortsighted to the left once again, the real estate sign for the office she’s about to buy behind her, realizing she may have made a horrible mistake. She’s said time and again that each of them need to be their own lawyer, and the editing and cinematography here makes it clear what that means: Jimmy will spin shit into gold, and Kim will be alone with the byproducts. In fact it’s so clear that Jimmy’s climactic sequence in the episode, in which he punishes the now gravely ill Chuck for screwing Kim over by meticulously doctoring all his Mesa Verde documents to contain the wrong business address, is all but unnecessary.

And then there’s Mike, who somehow grows both sadder and more menacing by the week. To a soundtrack that contains Breaking Bad’s trademark percussion, he tracks down Hector Salamanca at his local hangout and the warehouse where they load up the truck from the opening scene with contraband. He has an adorable, devastating scene with his beloved granddaughter Kaylee, whose every memory of this man is destined to be tainted by his inevitable future exposure as a mass murderer, as the two of them work on a project together with a drill: “Pop-Pop’s making a special hose!” Later that night, his bald head luminous against the black of night through his kitchen window, he wipes the hose clean of fingerprints; then, illuminated like an island amid an ocean of darkness by the light of His Girl Friday on his TV and a lamp near his head, he feeds a nail into every hole in the hose, point up, preparing for some terrible confrontation to come. Cut to credits. Holy shit.

If I sound like I’m waxing rhapsodic now—well, I am. But you should have seen me as I was actually watching the thing. I was gasping, giggling, resting my face in my hands, throwing my hands up in the air, taking twitter breaks just to enthuse about how stupidly beautiful everything was. Seriously, Villanova students “celebrating” their team’s win in the NCAA Tournament by torching police cars or whatever had nothing on me. If you care about television as an art form, what the cast and crew of Better Call Saul just did was every bit as much of a victory. 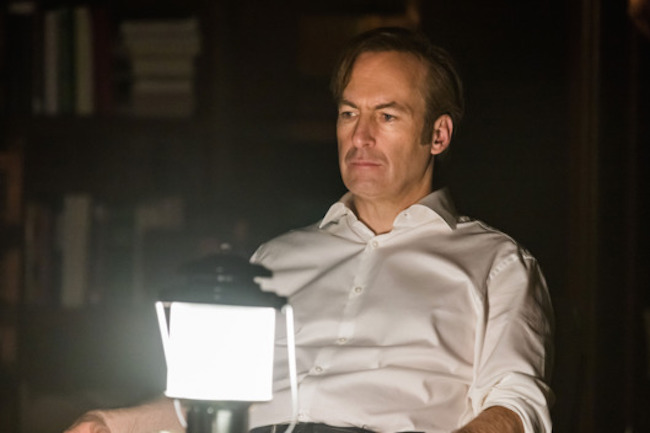