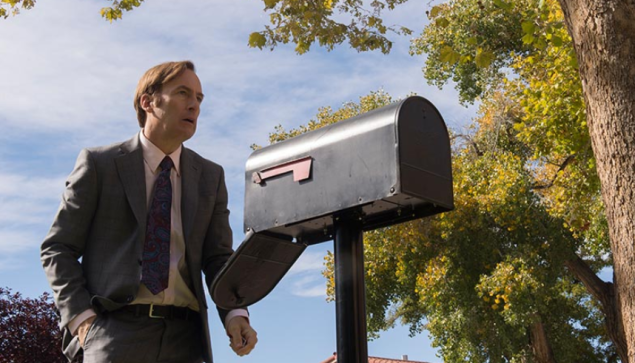 Throughout its second season, Better Caul Saul has chronicled the parallel paths of Jimmy McGill and Mike Ehrmantraut, and those paths lead nowhere but down. Jimmy blows his shot at the bigtime on the partner track at a prestigious law firm with the corner-cutting, dirty-tricking, mildly felonious behavior his older brother Chuck always said was innate in his character, culminating in a vengeful act of forgery that could cost not only him but his girlfriend and quasi-partner Kim their budding careers in independent practice. Meanwhile, Mike’s moonlighting as low-level muscle in the meth trade slowly draws him into a blood feud with the Salamanca cartel, in which both his stubborn pride and his natural criminal skill bring him ever closer to the line of cold-blooded murder that he’ll cross time and again in the years to come. We know where both these paths lead, of course: to Walter White, Jesse Pinkman, Gus Fring, and disgrace and death respectively. But by the time “Klick,” last night’s season finale, drew to a close, their paths had neither once again intersected nor reached the point of no return. Chuck caught Jimmy admitting to a felony on tape (“I woulda made Nixon proud!” he humble-brags, the tape proving him righter than he knows), but the episode ended before he could play it back to anyone. Mike had Hector Salamanca in the sights of his sniper rifle, but a mysterious message from an unseen interloper — “DON’T” — kept him from pulling the trigger. In its restraint, its quietude, its geometrically precise shot compositions, and its overall lack of anything but hints of its predecessor series Breaking Bad’s white-knuckle mayhem, Better Call Saul Season Two was a strong statement from creators Peter Gould and Vince Gilligan, but that statement ended with a question mark.

Question number one: Who left the note for Mike? It was someone smart and capable enough to tail him to his desert redoubt outside the Salamanca cabin, rig his car horn to honk incessantly, and leave behind the anonymous warning, all without being detected by the most capable surveillance expert imaginable — and it’s someone who, without himself being a Salamanca (they’re all accounted for on the compound except Tuco, and stealth is not that guy’s style), has a reason to want the Salamancas left to their own devices, yet does not have a reason to kill the guy who’s set out to kill them in turn. In other words, it sounds a whole lot like the work of a certain mild-mannered fast-food chain entrepreneur Mike will get to know intimately in the years to come. But if indeed the Chicken Man has come home to roost, Better Call Saul isn’t saying…yet. Instead it leaves us as out to sea as Mike himself: We’ve witnessed an execution, we’ve had its perpetrator in the crosshairs, and we’ve been thwarted by a third party we can’t even see. The episode evoked Mike’s moral isolation so marvelously — most notably in a breathtaking series of cuts in which a closeup on Ehrmantraut and his friendly neighborhood gun dealer is pulled back in stages to a shot that leaves them tiny as ants in the vast wasteland — that this final act of abandoning him to mystery and uncertainty feels less like a jarring interruption than a logical outcome.

Question number two: What will Chuck do with the tape? For all that he’s worked to undermine his little brother over the years, and in this season in particular, the elder McGill’s plight this episode was at times almost unbearable to contemplate. The excruciating, endless shot of him strapped to a gurney in the hospital falling his panic attack and skull-rattling fall in the copy shop to which Jimmy’s criminal trail led him last episode was especially awful: Gilligan, directing from a script he co-wrote with Heather Marion, stages the shot upside-down to heighten the discomfort, as if Chuck’s been chained to the ceiling to be poked, prodded, and made a general spectacle by his unseen emergency-room Torquemadas. He loses his freedom to a temporary emergency custody order from Jimmy. He loses consciousness after a CAT scan renders him psychosomatically catatonic. And if it weren’t for a scene where he slinks into his garage to dig a familiar rectangular device out of storage, it might seem as if he’s lost his mind entirely, covering his living room in foil from floor to ceiling to keep out the deadly, and imaginary, electronic rays that he tells his still-loving kid brother have fried his brain. But this last bit at least is an act designed to draw honesty out of his perpetually dishonest sibling, and it works like a charm. And why shouldn’t it? From a visual perspective, at least, the criss-crossing duct tape that holds his makeshift force-shield together evokes the never-ending parade of square and rectangular window frames that box the characters in at every other opportunity — in the hospital where the brothers awaited their mother’s death in the flashback that ends the episode, in the converted dentists’ office where Jimmy receives the news from Howard Hamlin that Chuck has “quit” the firm he cofounded, and on and on and on. All Chuck has done is combine his cunning and his illness in such a way as to recreate the circumstances that have revealed Jimmy’s true colors time and time again.

Jimmy himself may not have detected his brother’s duplicity here, but he sure as shit sees it in himself. He’s so horrified by how his scheme affected Chuck that he risks exposure by racing into the copy shop to take charge of the attempt to save him. He stays by his side at every minute in the hospital, a generosity of spirit not even afforded his sainted mother. He risks his brother’s wrath by ordering the tests he feels will help the older man despite himself, then blows up at the doctor (played by a pitch-perfect Clea DuVall) who talked him into it when those tests appear to have broken Chuck’s mind. And in the end, he comes clean about the forgery rather than allow his big brother to take the fall for it himself. But his most affecting and upsetting moment of recognition comes when he and Kim stumble across the commercial he’s made for his elder-care practice — a concoction of purest blarney and baloney, featuring the adorable old folks who stopped Hitler and put a man on the moon yet now can’t get a fair shake unless they pick up that phone and say “Gimme Jimmy!” As the man who will at some point in the not too distant future advise a meth kingpin how best to cover up the murder of children stands silhouetted in front of an American flag, Kim beams upward at the screen, moved almost to tears with joy and admiration for her friend, a man she believes in. There’s nothing there to believe in, though. Nothing at all. 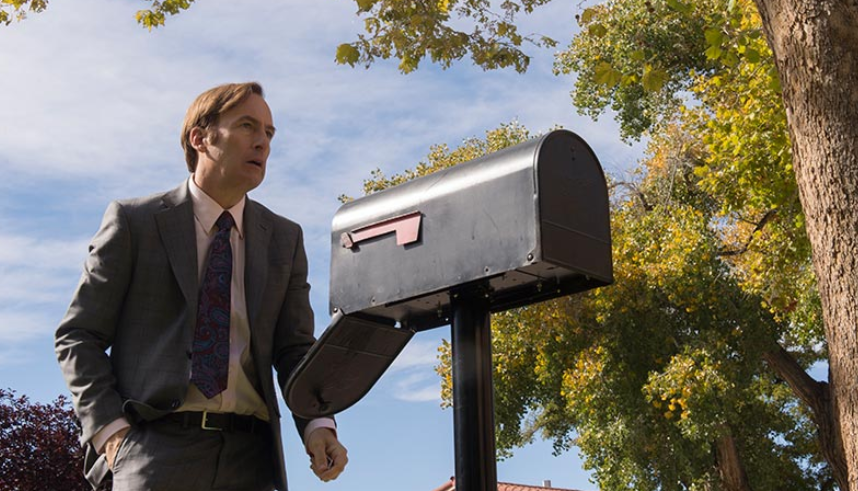