Mr. Clinton, speaking at St. Gabriel’s Episcopal Church in the Prospects-Lefferts section of Brooklyn, said Mr. Sanders seemed to be running more aggressively against President Barack Obama and his own legacy rather than Republican policies, and dismissed the Vermont independent as a newcomer to the Democratic Party who didn’t know any better.

“Sometimes in this primary I get the feeling that the gentleman who’s running against Hillary is running harder against President Obama and me than he is against the legacy of the Bush administration,” Mr. Clinton said to applause. “You know, after he’s been a Democrat a little while longer he’ll get used to it. He’ll realize, you know, our party is the best hope we got.”

Mr. Sanders, a self-described democratic socialist, caucuses with the Democrats in the Senate but doesn’t belong to any political party, though he is running in a Democratic presidential primary. In New York, where only registered Democrats can vote on April 19th, this has been a source of contention for some in the Democratic establishment.

Mr. Clinton, while also taking his digs at Republican front-runner Donald Trump, tweaked Mr. Sanders on a variety of fronts, criticizing him for voting against a 2007 immigration reform bill and not supporting past gun-control legislation. Though some labor unions who now support Ms. Clinton also opposed the bill, which would’ve boosted the number of guest workers in the country, the former president said Mr. Sanders blew a tremendous opportunity to help undocumented immigrants avoid wrenching deportations.

“We lost that chance,” Mr. Clinton said. “Think what this country would be like today.”

He also said he was irked by the derision some Sanders supporters have developed for Ms. Clinton’s many endorsers.

“Every time somebody endorses her, they’re condemned over the internet by people who are not for her as creatures of the establishment,” the former president said. “The establishment now includes the Progressive Black Caucus. Planned Parenthood. The League of Conservation Voters. The Human Rights Campaign … it’s getting pretty thick out there.”

“Most of the major unions in this country and an enormous number of senators and congressmen and governors who actually have experience working with her. They’re not all members of the establishment,” he added. “They just want a change-maker.”

Mr. Clinton, who has been stumping for his wife across the city, steered clear of controversy today. He sparred with Black Lives Matter activists last week and later said he “almost” wanted to apologize to them, further angering critics who feel his administration’s toughened penalties for nonviolent drug offenders have adversely impacted blacks. A spokeswoman for Mr. Sanders said on Saturday that Mr. Clinton’s comments were “unbelievable.”

Former Councilwoman Una Clarke and her daughter, Brooklyn Congresswoman Yvette Clarke, introduced Mr. Clinton to the predominately black congregation. Both women are important surrogates for Ms. Clinton in Brooklyn’s Caribbean-American community, which is expected to vote overwhelmingly for the former secretary of state. 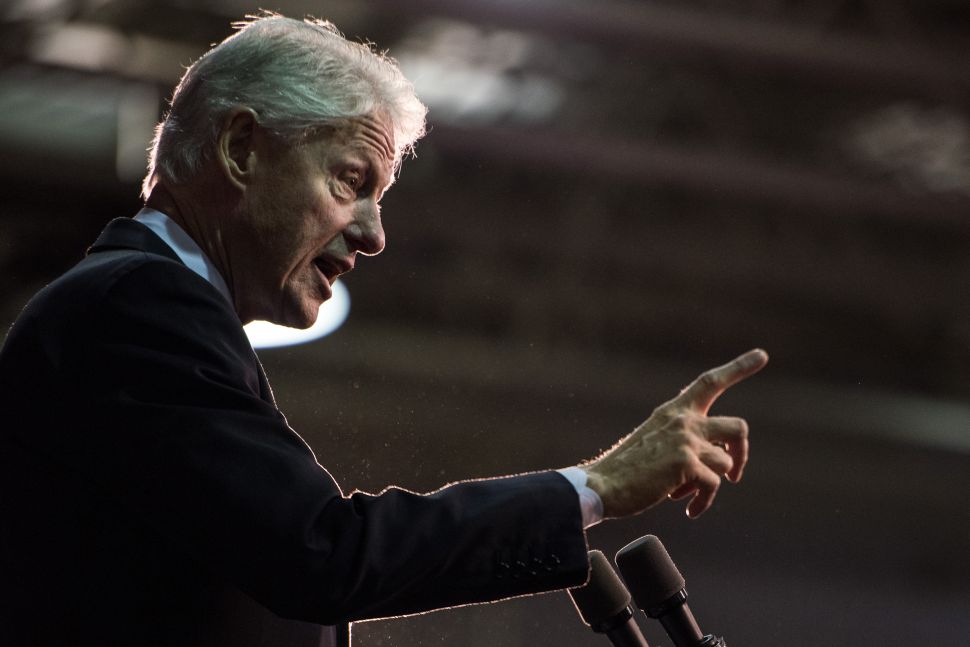