Mayor Bill de Blasio will never sound quite like the other Hillary Clinton surrogates in New York. It’s the byproduct of branding himself as a progressive change agent and watching as a presidential candidate who is the avatar of much of what he stands for, and hopes to achieve, surges onward. Even now, with Ms. Clinton marching ever closer to the Democratic nomination, Mr. de Blasio can’t resist uttering niceties about her democratic socialist rival, Sen. Bernie Sanders of Vermont.

How could he? Unlike much of the Democratic establishment in New York State, Mr. de Blasio’s rhetoric runs in direct conflict with the Bill Clinton legacy, even though he managed Ms. Clinton’s first Senate campaign. When triangulation was in vogue, Democrats like Sen. Charles Schumer and Gov. Andrew Cuomo were not terribly uncomfortable. For people of Mr. de Blasio’s ilk, the centrism of the 1990s represented a dark epoch, a bad-old-days that gave way to this apparent progressive renaissance.

Just a day before I spoke with Mr. de Blasio on Friday, Congressman Hakeem Jeffries of Brooklyn had derided the Vermont independent as a “gun-loving socialist,” implying the term was something to be ashamed of. I asked Mr. de Blasio if Mr. Sanders’ unexpected success means that “socialist” is no longer a dirty word in America.

“Absolutely,” the Democratic mayor, without hesitation, replied. “I believe fundamentally we’re at the beginning of a progressive era.”

“I think something really is changing in American life and certainly in the Democratic Party and certainly one of the elements of that is that there is a real critique of what’s wrong with the free enterprise system and what’s wrong with the way we regulate the free enterprise system and obviously how the excesses of Wall Street weren’t stopped in time and how we have to do better going forward,” Mr. de Blasio said.

“But in the same context there’s been a reexamination of the language obviously, particularly for millennial voters, and I think more and more in this country the word ‘socialist’ is being looked at the way it is for example in Western Europe or Latin America in the context of social democracy. When Bernie talks about socialism, he’s talking about something that I would define as Western European social democracy, so a model we’ve actually seen in democratic societies. But there’s no question that the openness to the word indicates there’s a larger examination going on of what we need to do in the future.”

Despite the polls that show voters under 30 overwhelmingly backing Mr. Sanders, the mayor rejected the premise that the Vermont senator has a stranglehold on the youth vote. Pushed then on what many of these young people don’t see in a former secretary of state, New York senator and first lady, Mr. de Blasio said “a lot of Bernie’s voters will [eventually] feel Hillary is by far the best choice when it comes down to her versus a [Donald] Trump or a [Ted] Cruz.”

“For millennials, they’ve come up in a time of economic challenges and there’s tremendous concern about the future,” the mayor, who has two millenial children who may be feeling the Bern, offered. “There’s a deep sense of economic insecurity. Those kind of concerns understandably generate an anger with the status quo and obviously Bernie has spoken to that but at the same time the question is, who’s actually going to get things done for you, who’s going to actually achieve the change you need?”

Mr. de Blasio infamously dallied on his endorsement of Ms. Clinton, waiting a half year before forcefully backing her in October. Many Democrats privately mocked him for coming late to the party—though could you really blame him? Ms. Clinton, as Mr. de Blasio dutifully pointed out, has won a couple million more votes than Mr. Sanders, but the liberal energy, particularly among millenial voters, still sizzles behind his unapologetically leftist bid. At 74, with a message that has deviated little in 40 years, he can draw 18,000 people to the South Bronx for a weekday rally. Ms. Clinton could only dream of such a number.

Few other Clinton backers would bother to parse, let alone justify, Mr. Sanders’ style of socialism. Not Mr. de Blasio: “What’s clear is the people do not want to see an unregulated, unfettered free enterprise system, they don’t want supply-side economics and trickle down theory. They want something very different and Bernie has I think contributed greatly by helping to open up that dialogue and allow a word [socialist] that certainly is a relevant part of the discussion to be seen for what it is.”

I asked Mr. de Blasio how he reconciles the 1990s Clinton legacy—which saw the reduction of welfare benefits, the passage of NAFTA, the signing of the Defense of Marriage Act and toughening of penalties for nonviolent drug offenders—with both his support for Ms. Clinton and his celebration of this new progressive era. Weren’t the Clintons emblematic of the type of politics he’s now disavowing? Isn’t this why many Sanders supporters feel like they can’t trust her?

“I think the idea of reconciling it is a fundamental misunderstanding of history to begin with,” Mr. de Blasio shot back. “The ideas you’re talking about that President Clinton espoused and the Democratic Leadership Council [a nonprofit that pushed for the Democratic Party to abandon its liberal legacy] espoused are from the 1980s and 1990s. It’s 2016. The world has changed fundamentally. Secretary Clinton is a different person than her husband, obviously. She’s offered a platform that is relevant to today and it’s rooted so much in what she’s done.”

To Mr. de Blasio, the era of the DLC is something to be disassociated from Ms. Clinton, even if she had a front row seat to, and played some role in, its influence. (The nonprofit dissolved in 2011.) Never mind that Mr. Clinton strenuously defends all aspects of his legacy and centrist Democrats consider his presidency their crowning achievement; the left-wing is now ascendant, so let’s move on.

“To me the era of the DLC obviously is long since gone in terms of its organizational impact and the Democratic Party started moving leftward a while ago,” he said. “You can see it in Howard Dean’s campaign and in John Edward’s campaign in 2004, you could see it in Barack Obama’s campaign in 2008. This is a bigger trend that has now been around for more than a decade and it’s really consolidated.”

I asked him if, given the leftward drift of the party, he thinks Sanders supporters should just get over their grievances.

“I’d tell them to go win the day, that times are changing, progressives are ascendant, the party is changing. Let’s consolidate that process and make more change,” Mr. de Blasio said. “It’s as simple as that.” 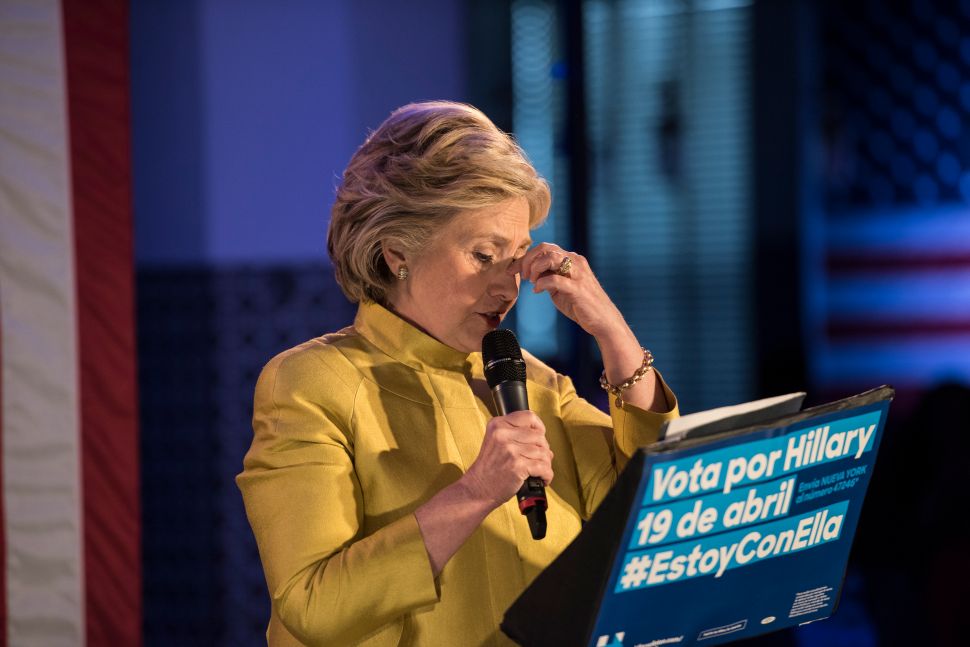