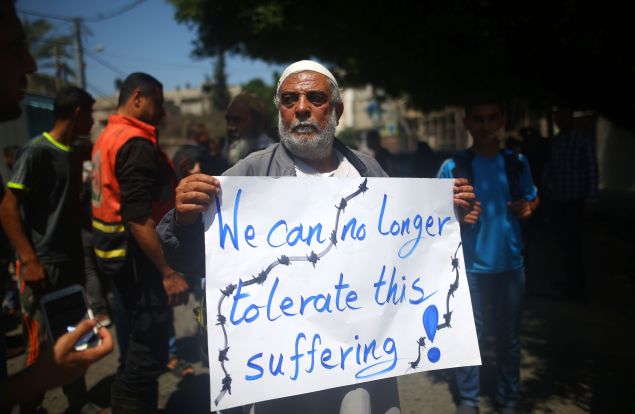 A man whose home was destroyed during 50-day war between Israel and Hamas militants in the summer of 2014 holds a banner during a protest in front of United Nations Development Program (UNDP) headquarters, in Gaza City on April 20, 2016. (Photo: Mohammed Abed/AFP/Getty Images)

The terrorist organization Hamas and the Boycott, Divestment and Sanctions movement (BDS) share a common goal: The elimination of the Jewish State of Israel—one with rockets, tunnels, suicide bombers and explosives placed to kill the maximum number of civilians; the other with words and actions to demonize Israel, turning it into a pariah not worthy of its own state in the Middle East.

The Hamas Charter states, “Israel will exist, and will continue to exist, until Islam abolishes it…. There is no solution to the Palestinian problem except by Jihad.” Senior Hamas official Izzat al-Risheq openly admits that the ultimate goal of BDS is to destroy Israel and calls for escalating BDS “to isolate the occupation and end the existence of its usurper entity.”

In their own words, there is no daylight between the ultimate objective of Hamas and BDS

Since the goals of Hamas and BDS intersect, it’s not surprising that former U.S. Treasury terrorism analyst Jonathan Schanzer recently testified before two subcommittees of the House Committee on Foreign Affairs about a troubling link between a major American funder of the U.S. BDS campaign and the terrorist organization Hamas.

Using available “open source” information, it’s possible to examine past associations of individuals now active in American Muslims for Palestine (AMP), a major supporter of Students for Justice in Palestine (SJP), the campus arm of the American BDS movement. From this data, Mr. Schanzer, now working for the Foundation in Defense of Democracies (FDD), concluded that “at least seven individuals who work for or on behalf of AMP have worked for or on behalf of organizations previously shut down or held civilly liable in the United States for providing financial support to Hamas: the Holy Land Foundation for Relief and Development (HLF), the Islamic Association for Palestine (IAP) and the Kind Hearts Foundation for Humanitarian Development” (KindHearts).

According to Mr. Schanzer’s testimony, the U.S. Treasury, in 2001, designated HLF the U.S. financing arm of Hamas. From 1995 to 2001, “HLF sent approximately $12.4 million outside of the United States with the intent to willfully contribute funds, goods, and services to Hamas.” Seven officials were indicted and the organization was closed down. Three individuals from HLF now work for or on behalf of AMP: Hossein Khatib, a board member for AMP and former regional director for HLF; Jamal Said, keynote speaker at AMP fundraisers and an unindicted co-conspirator in the Holy Land Foundation trial against HLF; and Salah Sarsour, AMP board member who spent eight months in an Israeli jail for his Hamas activity.

Working closely with Students for Justice in Palestine (SJP), American Muslims for Palestine (AMP) provides money, speakers, training, printed materials and campus coordinators to student activists. It spent $100,000 on campus activities in 2014. AMP is a corporate not-for-profit, but not a federal 501(c)(3) tax-exempt organization. It uses the 501(c)(3) tax-exempt organization Americans for Justice in Palestine Educational Foundation (AJP) as a fiscal sponsor, gives its money to AJP, who then disburses it to SJP and other BDS groups—a very convenient relationship that limits transparency.

In the interest of transparency and national security, Mr. Schanzer urges Congress to legislate a disclosure process for tax-exempt organization employees and board members previously implicated in terror finance, requiring full release of prior histories to the IRS. He criticizes the U.S. Treasury for no longer giving sufficient attention to terror financing, commenting, “After notching eight terrorist designations of domestic charities over the last 15 years, the pace has slowed to a crawl.”

Mr. Schanzer notes that while “our open source research did not indicate that AMP or any of these individuals are currently involved in any illegal activity,” the presence of operatives of former terror financing organizations in the leadership of AMP, an American charity, is significant, highly suspicious and demands further investigation by the federal government.

The infiltration of Hamas terror financiers into a major American BDS-funding group should be a wake-up call to naïve college students and BDS apologists who think the BDS campaign is all about human rights and “ending the occupation.”

Remember Cervantes’ observation—“Tell me thy company, and I’ll tell thee who thou art.”

Ziva Dahl is a fellow with the Haym Salomon Center with a Master of Arts degree in public law and government from Columbia University and an A.B. in political science from Vassar College. 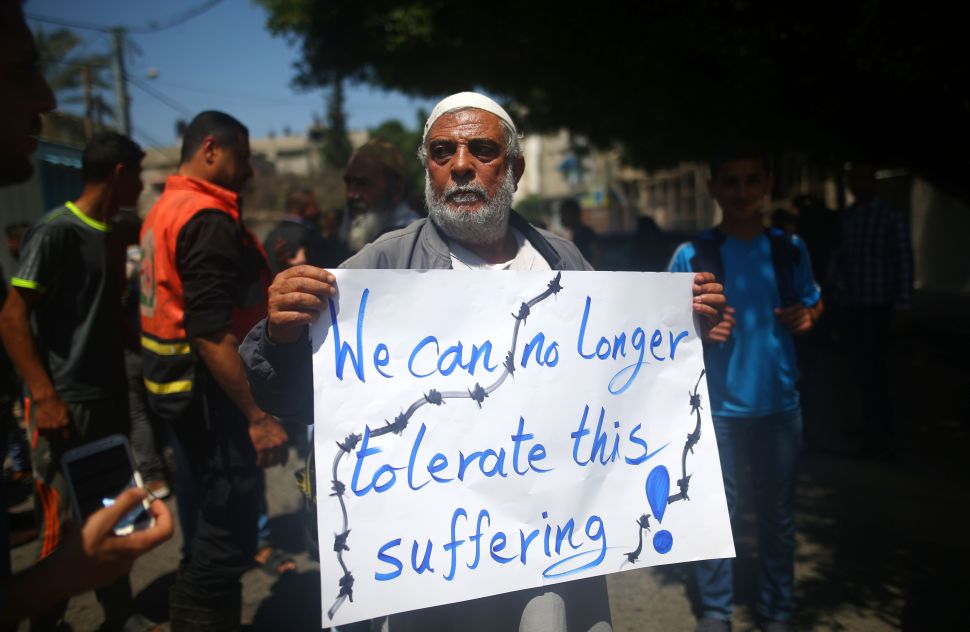