In college, I spent part of my junior year playing the violent game rugby. I played hooker, the best name for a position in sports. Once the season got started, it seemed like someone went to the hospital almost every game. At practice the next week, it would usually turn out that the person in question suffered a concussion, which sounded serious, but they always seemed to be fine. I didn’t know how seriously to take it.

Concussions, which the Mayo Clinic defines as “a traumatic brain injury that alters the way your brain functions,” are mysterious. Even in the dozen or so years since my brief playing days, we now take hits to the head much more seriously.

‘All of these technologies are just a bit young’

It’s important for someone with a concussion to get out of of danger, but long term effects are rare, unless an athlete sustains too many. That’s why it’s vital to accurately diagnose the condition and treat the patient, a fact dramatized in Concussion, a recent movie starring Will Smith.

HoustonTexas-based Braincheck has created an iPad app loaded with lots of simple games that test cognitive functions to improve that assessment for first-responders and trainers. By asking a player who has had a collision to take its concussion test on the sidelines, a team’s staff can better assess whether or not he or she has taken a hit bad enough that they need to begin recovery rather than resume play.

“One of my big interests has always been: How can we figure out what’s going on under the hood by using computerized tests, essentially games?” Dr. David Eagleman, the founder of Braincheck, told the Observer during a phone call. Dr. Eagleman has been pursuing work in the field of psychophysics, the study of the relationship between sensory stimulation and physical response to that input.

Braincheck features several tests that assess different cognitive skills, so many that an athlete can’t game the app by learning it. “Scientifically, do we know that these things measure what’s going on in the brain? That, we’ve known for 30 years,” Dr. Eagleman said. What’s changed is portable computing. Tablets have made it easy to put multiple batteries worth of these tests into a format a trainer can swiftly pull out of their bag when they are worried they might need to take a player out of the game.

Here’s how Braincheck works: At the start of the season, players on a team pass around the iPad and take a baseline test of a variety of skills under normal conditions (I took the initial evaluation; apparently my cognitive skills could use work). That baseline is stored inside the iPad until an incident happens. If a player takes a bad hit, the trainer can whip out the tablet and ask the athlete to take a new test. It won’t be exactly the same games, but they will test the same abilities. If the results come out too wide of the player’s baseline, it might be time for further assessment or a trip to the doctor.

“I like that it’s using multiple tests,”‘ Dr. Barry Kosofsky, a pediatric neurologist at Weill Cornell Medicine and New York-Presbyterian, told the Observer in a phone call after reviewing Braincheck. “I like the idea of having a baseline.” But he and other sources cautioned that computer aids like Braincheck’s can only refine that initial assessment. They can’t fully diagnose.

“We detect the brain changes that correlate with a concussion,” as Dr. Eagleman put it.

Dr. Kosofsky said that diagnosing a concussion depends on many factors, including an athlete’s history with headaches, the particular hit, genetics and more. And he added that the ecosystem of firms attempting to make that sideline assessment has been growing more complex. ImPACT also uses computer tests, both on the field and off, to assess concussions, while Syncthink uses eye tracking toward the same end.

“I think no one product will be the be all and end all. They all need to be validated,” Dr. Kosofsky said.

Both ImPACT and Braincheck cite a considerable literature to support the fact that cognitive tests of different skills can provide refined information about brain function, but Dr. Kosofsky suggested that driven athletes can hustle these systems, too. Some might dumb down their performance when doing the baseline test. Students may not be that savvy, but if they want to go back in to the game badly enough, they may be much more attentive about taking a tablet test after a hit than they were back at that first practice, when it didn’t really matter.

“We want biomarkers, something that we can measure on the outside reflecting what’s going on on in the inside,” Dr. Kosofsky said. Banyan Biomarkers is working on a speedy blood test that can indicate a concussion, but of course that requires drawing blood.

“All of these technologies are just a bit young,” acknowledged Dr. Eagleman. “There’s a whole bunch of companies in the terrarium right now.”

Braincheck also sees an opportunity in regular testing of older adults, to spot signs of a pre-dementia condition, which marks the best time to start taking drugs that may slow the disease’s onset. Additionally, it foresees a market in workplaces that really need workers to have their full faculties, such as pilots and heavy equipment operators.

For concussions, it could turn out that using more than one of these new strategies together could be optimal on the sidelines of a game. “If you put a couple of these together, you increase your sensitivity,” Dr. Kosofsky said.

It would be somehow fitting if technological teamwork ultimately assesses whether a groggy athlete should return to play. 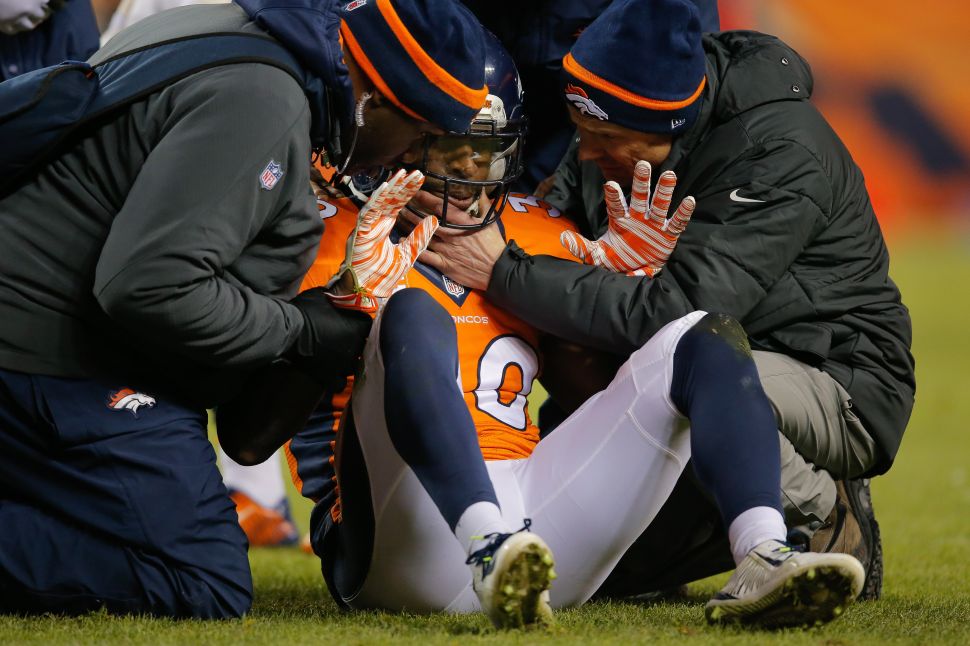