Saturday night and we are driving east on Route 9 through the heart of industrial Jersey on our way to the Barclays Center to catch Bruce’s first ever show in Brooklyn. But the only thing on all of our minds is the Purple One, a.k.a. His Royal Badness, a.k.a. Prince.

John and I look at each other and nod affirmatively to Ellie.

My boy John and I were returning to the scene of the crime as it were, having gone to see Bruce in December 1980 on The River tour. We had hitched a ride with his older brother Steve and his friends, riding in the backseat, inhaling secondary clouds of pot while taking nips from the bottle being passed around. Like Ellie and Julia, we were 14. Back then live music was an event of mystery and anticipation—what would the Boss play?  What would he open with? How many encores? Would he cover anything?

Today, not so much.

If video killed the radio star, then the Internet has surely killed the live show. Even the greatest living performer Bruce Springsteen can’t outrun the long tentacles of the internet. We knew every song he’d play before he played it.

It would begin with a raucous version of “Meet me in the City Tonight,” followed by a song by song play of The River, a long, two-album record with twenty songs recently re-released under a box set called The Ties That Bind. Even songs like “Point Blank” and “I Wanna Marry You,” not particularly live worthy, would be played in order.

“I wanted The River to reflect life…laughter sadness heartache tear drops love, etc,” Bruce opines each night before he takes you down the River.  Even if you hadn’t seen an early show you would know this description from E Street radio, which plays it on loop over and over promoting upcoming shows.

After The River, Bruce would play seven to ten songs from his greatest hits catalogue: “Born To Run,” “Thunder Road,” “Because The Night.” All amazing songs and still moving to hear live no matter how many times you’ve heard them. But what the internet has done—along with satellite radio—is to kill the mystery of the live show. The whole experience has become the superfan experience. The model is predicated on the idea that all knowledge is good knowledge. Sadly that isn’t true, especially for a live show.

For the hardcore fans, the ride down the River is still great, but gone is the vibrancy and spontaneity of his youthful shows when we first saw him in Philly in 1980. The Boss still brings it as hard as anyone and for longer than anyone, but there’s the feel of a victory lap.

After nearly 50 years of performing, Springsteen has nothing left to prove to an audience. Instead of sneering and howling and moving the crowd by sheer force of will, Bruce assumes the part of hall-of-famer who is playful and funny and adoring of his fans. He truly loves being on stage. There’s no longer the youthful fear driving his professionalism and marathon-like performances. The E Street Nation loves being there with him too, and like him, their angst which once drew them to his music has long since dissipated. Life for E Streeters and Bruce has finally settled in. And everyone’s going to enjoy the twilight years.

As we cross over the Manhattan bridge, Julia pipes in on the discussion. “Somebody online said it’s ‘Purple Rain’—it is on a set list.”  Thank you Internet, for shitting on the only mystery this show had left.

“Do we have to know everything before it happens?” I say, with a little more edge than warranted.

We sit fourteen rows from the stage, surrounded by E Street fans all talking about Prince and what Bruce would do.  In an interview Prince had given a decade or so ago, he had waxed poetic about Bruce as a band leader. They were cut from different cloth, but the two giants from the Eighties shared a love of being James Brownian in their musical leadership on stage. They were friendly adversaries and admirers of each other.

Surprisingly, the building is electric. Prince’s death has injected the Brooklyn stop on The River tour with anticipation and mystery, like it was 1999.

Behind us sat two couples, early sixties and by their accents from “Somewhere in the swamps of Jersey.”  The two men jawed about Prince.

His skinny bearded buddy responded sharply: “You didn’t say that about Glenn Frye,” referencing Bruce’s homage to the Eagles front man a month before by opening his show with “Take It Easy.”

“I like his music.  I hate Prince’s.”  I wondered if he had ever listened to a note of it.  Unlikely.

A woman from Long Island with bleach blonde hair who had had a drink or two beyond tipsy chimed in, “Well just don’t ruin it for the rest of us.”

A lesbian couple in front us had a sign that read, “Lesbians Love Bruce.” They talked about Prince, hoping for “Let’s Go Crazy.”

Ellie leans over and tells them “Purple Rain” was heard during sound check.  A little crestfallen at first, then they get giddy: “That will be amazing.”

Then the lights fall down and darkness descends and as if Prince himself had designed it, purple reigns over the stage at the Barclays Center. A beautiful effervescent purple glow, like heaven itself sat before us.

Bruce walks onto the stage wearing a purple paisley scarf (all the band members are wearing purple as well), strumming the familiar chords of “Purple Rain” and begins to sing. All the emotion for an admired adversary and brother pours out.  One giant of music singing goodbye to another as Prince takes his final journey down The River. Nils Lofgren rips a Prince-like solo mesmerizing the crowd and then hands it back to Bruce who brings the arena down to its knees singing together in praise and homage of Prince.

When “Purple Rain” ends, Bruce says of Prince: “He was the best…the best showman, songwriter, musician, band leader. On occasion when I saw one of his shows, I left humbled. I’m going to miss that. I’m going miss him.”

Bruce left us humbled Saturday. Time and the internet and satellite radio had conspired to kill the show. All was known, all was lost. But Prince and Bruce, two legends, came together in tragedy and musical brotherhood and fought The River’s ultimate foe: Time. And they won, transcending death and certainty by delivering an unknowable born when one great artist covers another in homage and tribute. All hail the Boss and The Purple One. 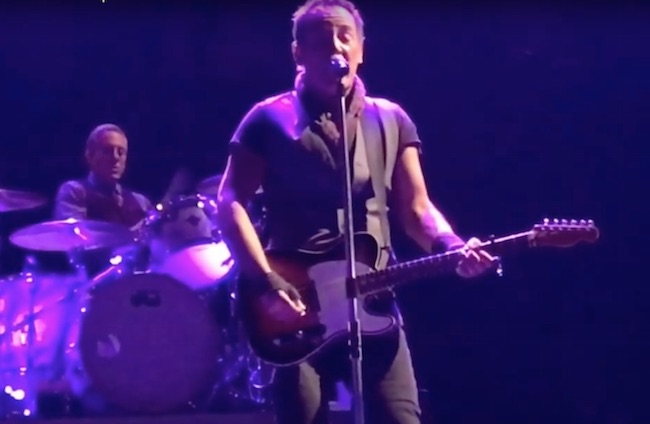