“’You wanna buy right now? Let’s go to the ATM.’ So I walked him to the ATM. Got his money. Made it happen. Closed the deal right away.” At one time, this might have been Coss Marte’s description of the type of transaction he used to make: hustling the streets to build a small but wildly profitable cocaine empire before he was busted, charged and incarcerated. Today, it’s the way he remembered recruiting his first paying customer to his prison-style workout program. In its early days, that meant teaching the CEO of a New York real estate brokerage firm how to do pull-ups in the park, alongside Mr. Marte’s mom and aunt, the rest of his customer base. Today, just over three years since he got out of prison, he has full classes, a growing business and a social mission.

While serving his seven-year prison sentence, Mr. Marte completed the Shock Incarceration program and used what he learned there and in the prison yard to develop ConBody’s body-weight-only workout concept. “They work you out two hours a day, they beat the hell out of you. Make you do slavery shit. Mow the lawn. Pick rocks up from the ground,” he remembered of Shock. But ConBody isn’t about exercise as punishment or completing mindless tasks; Mr. Marte thinks people should look forward to going to the gym, instead of dreading it.

“I felt like I was affecting this neighborhood. I felt like this is the way to give back and start something new around here.”

It appears Mr. Marte has been successful. The 7 a.m. class the day after St. Patrick’s Day was full. Participants in ‘Full-Body Friday’ waited on metal benches as the 6 a.m. class filed out of the bright studio, the backdrop to Mr. Marte’s realized vision. Although the studio’s design features stylized prison bars at the studio’s entrance, a barbed wire motif on the walls, and a ‘mug shot’ wall for photos to post on Instagram with #dothetime, the workout itself has no gimmicks.

The classes have evolved to include a running group and a yoga-focused class. They run 30 or 60 minutes and focus on constant motion, with classic military-style movements like push-ups, pull-ups and squat-thrusts, but often with a twist. What you get is a good blend of cardio and strength. Expect to sweat, especially in one of the central segments of the workout that uses a deck of cards. Taking turns with a partner to pick cards at random, exercises are completed based on the suit and value of the card, which tell you which exercise to do and how many repetitions. An ace signifies 25 of either diamond pushups, squat thrusts, burpees or lunges. There seem to be an awful lot of aces in the deck.

The challenge is not completed in isolation. The intensity of the exercises is balanced by the pumping bass of the music, the encouragement of the instructors and the camaraderie built through the buddy system. The gym’s popularity can be attributed to its focus on positive reinforcement and the friendly environment: ConBody’s team-building recently caught the attention of startups and tech giants, like Selfie on a Stick and Google, where Mr. Marte leads classes for employees.

Many ConBody regulars tried the classes through Class Pass, and ended up switching to ConBody as full members. Sarah Colburn and Lindsay Strait both work in finance and attend morning classes. They described the concept gym as “intense, but a positive and motivating experience.” Ms. Strait never thought she would be able to do “real” push-ups (no knee push-ups allowed), but now, with Mr. Marte’s encouragement, she knocks them out along with the group. Another couple, due to be married in June, work out together to get in shape for the wedding. Apart from young professionals and CEOs, ConBody’s personal training program has served actors Rose McGowan and Stephen Lang, as well as model Alessia Sushko.

ConBody deliberately set itself apart from bootcamps like Barry’s. “That’s the best way to break down that stereotype of formerly incarcerated people, that we’re scary and you’re going to come to a bootcamp to get screamed at. Before I started ConBody, I went to Barry’s and I went to other bootcamps here and there. They do that, they scream at you, and I didn’t want to be screamed at,” said Mr. Marte. He also aimed to get away from the impersonal experience you get at gyms like Ludlow Fitness, one of the few gyms in the Lower East Side.

The studio recently moved to its Lower East Side location, in the same neighborhood Coss Marte grew up, where he was first arrested at 13, and where he got his first felony at 18. At the corner where he used to hustle, he ducked into a bodega for a smoothie and greeted neighborhood locals. He returned, with the same dreams of becoming rich, but this time to add something positive to his neighborhood: he wanted to build a community. “I felt like I was affecting this neighborhood. I felt like this is the way to give back and start something new around here,” he told the Observer.

Part of Mr. Marte’s mission is to break down the stereotype of the ex-con. “We’re not tough. We’re human beings,” Mr. Marte said. All of the instructors have also served time. He hopes ConBody’s trainer model can be used as a stepping-stone for his trainers’ resumes, for those who come home and are ready to build a new life.

“The warden said he’d never seen that in the 30 years that he’s been working in corrections.”

Mr. Marte speaks frequently about his mission. At a recent American Correction Association conference in New Orleans, he was approached by James Walsh, the deputy commissioner of Rikers Island. They are working on implementing a bootcamp program for the inmates at Rikers. Mr. Marte said he has proved that his program works. He completed a demonstration at California City Correctional Facility for 200 inmates. He claims that the physical activity and team-building format help to ease tensions between rival groups inside: “When I started the workout, they were just all segregated, you could see when I lined them up. I did the two row thing, 50 inmates on one side, 50 inmates in the back. Then I made them face each other and told them turn around, that’s your partner. And they were all different people. After a while, they were all cheering for each other. The warden said he’d never seen that in the 30 years that he’s been working in corrections.” Mr. Marte has also advised Gov. Cuomo’s administration, and speaks to larger companies about how to implement a better method of hiring formerly incarcerated people, with ConBody as a model.

Mr. Marte attributes a good deal of ConBody’s growth to his partner and girlfriend, Jenn Shaw. They met on Tinder about a year after he was out of prison, and she was intrigued with his business idea and drive. At the time, it was called Coss Athletics. “I came up with that name because I was scared of people judging us because of the whole prison thing. Even though I was saying it was a prison-style workout. She said, ‘we need to re-brand.’” With her background in marketing, she saw the value of what he could do with his business, his story and the need for jobs for previously incarcerated people. Together with her business savvy, and Mr. Marte’s self-proclaimed eternal optimism (he is also an early riser, the 5 a.m. sort, seemingly the mark of successful entrepreneurs) the gym launch was a success.

Mr. Marte’s mother, Patria Martinez, still participates in her son’s classes. She is petite and spritely; Mr. Marte calls her a beast. She was his first client and has stuck with the workouts ever since. In Friday’s class, she was the last to finish mountain climbers. Mr. Marte turns his attention to her. “Come on, Mom, you got this!” The sweaty group cheered her on as she completed the set and Ms. Martinez smiled as she reached up to high five her son.

When asked what he wanted to be when he was young, he mentioned that he was very good at math and thought maybe he could be a stock broker. “When I caught my felony when I was young, that dream was shut down. Once I got locked up, a lot of blockage came from me taking that step to make it a reality.” His older sister used to avoid speaking about her brother who was hustling or locked up. She was one of the first Latina executives at a leading investment banking firm. “She was rags to riches, too. We grew up with not really much and they changed [our] lives around.” His brother is running for Assemblyman. “They were ashamed of me, and now it’s like they brag about me.”

Mr. Marte hopes to open a second ConBody location in Brooklyn soon. He has been nominated for an honorary degree from John Jay College for Criminal Justice. At 30, he will exercise his right to vote for the first time this year.

ConBody classes are $25 each, or $100 for a monthly unlimited pass. Workout videos are also available for download. 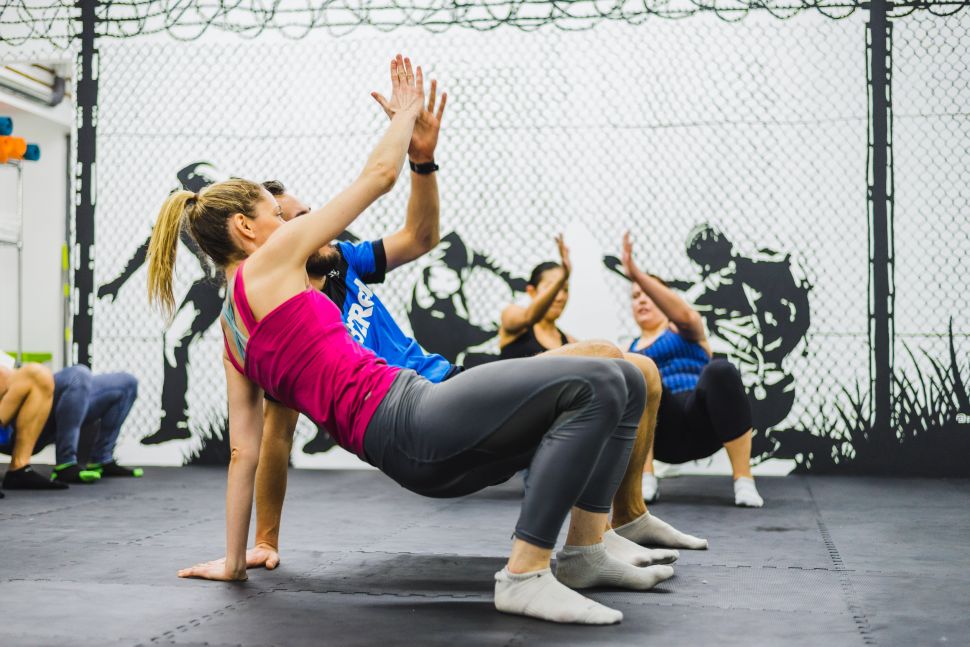