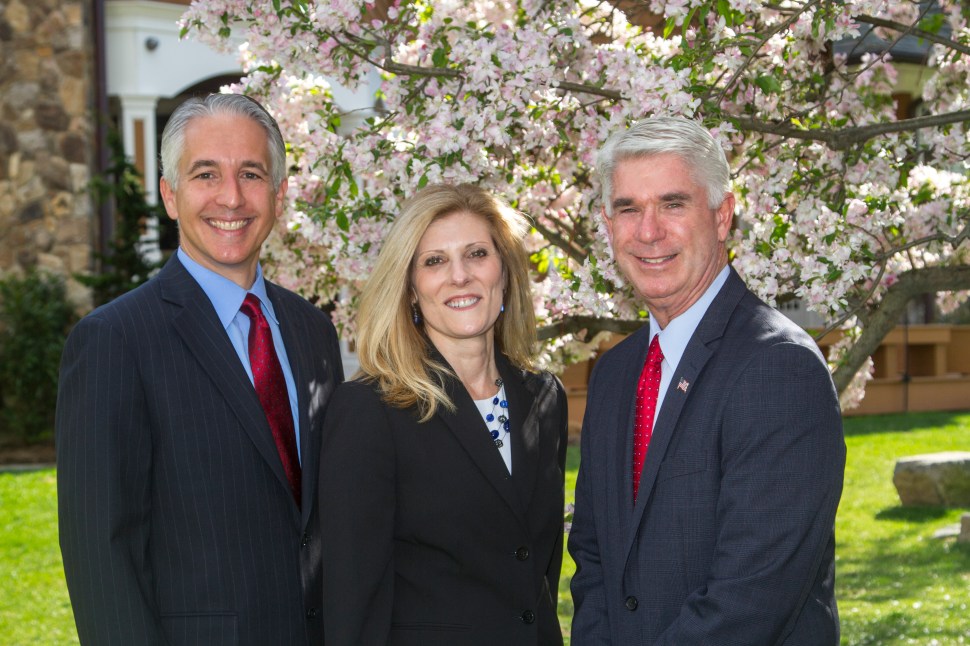 The announcement earlier this year by state Senator Kevin O’Toole that he will not pursue reelection promptly altered the political landscape in LD40, setting in motion the emergence of a new GOP establishment ticket that surfaced fully formed this morning.

“Having served as Passaic County Clerk for seven years has allowed me to work with the residents of Passaic County and to understand the needs of my constituents. I look forward to the opportunity of serving the residents of District 40 in Trenton, should I be so fortunate. We have been fortunate to have Senator O’Toole, Assemblymen Russo and Rumana represent us, and I am hopeful that, if elected, Kevin, Chris and I will continue that legacy of tireless representation as we tackle issues facing our constituents and the State of New Jersey,” said Corrado.

Her presence at the top of the ticket signifies – in part – the renewed influence in the district of former Passaic County Chairman Peter Murphy, a controversial figure who warred with O’Toole’s Wayne-based running mate Assemblyman Scott Rumana.

Of the three sitting legislators, only Rumana – in line for a judgeship – has not yet endorsed the newly formed 2017 ticket.

Running with Murphy’s stout support, Corrado first won her clerk’s seat in 2009, and won re-election in 2014. She is a life-long resident of the State of New Jersey and a graduate of East Stroudsburg University and Seton Hall Law School. She has been an attorney for 25 years and is a partner in the law firm of Corrado & Corrado, Esqs. As County Clerk, Corrado and her office have also partnered with their County’s Department of Veterans’ Affairs to bring back the Veterans ID Program. she is an active member of the Do Good Student Support Group which has provided over $500,000.00 in scholarships to New Jersey High School students. Corrado is the second of seven children and has four sisters and two brothers. She is married to Stan Alcala and Step-Mom to Danny, Matt and Nicole. Corrado and her husband are also Grandparents to four-year-old Mia.

Her running mates appear to form the appeasement to Bergen in the complex district.

“As a lifelong resident of Bergen County and serving on the Wyckoff Township Committee for over 6 years, as Mayor for almost 3 years, ensuring that every resident of my community has the opportunity to have their voices heard is of grave importance to me. We have been very well served by Senator O’Toole and Assemblymen Russo and Rumana in the Legislature and I look forward to working with Kristin and Chris, should we be elected, to continue that tradition of public service and advocacy for the residents of District 40 and New Jersey,” said Rooney, who served six and a half years on the Wyckoff Township Committee.

Elected to the Wyckoff Township Committee in November 2009, Rooney served as Deputy Mayor in 2010 & 2014 and Mayor in 2011, 2015 & 2016. Prior community service was his extended tenure on the Zoning Board of Adjustment (1999-2009). Rooney has served as a Township Committee liaison to the Policy Committee, Library Board, Shade Tree Commission, Ambulance Corps, Zoning Board of Adjustment and CERT. In addition, he has served as Fire Commissioner, Road Commissioner and Finance Chair for the Township of Wyckoff. He grew up in Upper Saddle River, New Jersey and attended Ramapo College in Mahwah for Business. He pursued a career in Arboriculture, which spanned over 30 years. Rooney is a partner in his mother-in-law’s business, HMS Global Holdings, LLC, headquartered in Wyckoff, New Jersey. HMS Global Holdings, LLC is a Real Estate Development and Management company. The assembly candidate and his wife Hayley own, Holland Hills Farm, LLC, an Equestrian business located at North Jersey Equestrian Center, Pompton Plains New Jersey. He and his wife, Hayley, are parents of 4 children and one grandchild.

“Community and public service have been at the forefront of my life. Having served on the Wyckoff Township Committee, the Wyckoff Education Foundation, the New Jersey Chapter of the Leukemia and Lymphoma Society, and other boards, this opportunity to serve the residents of District 40 and New Jersey in the Legislature allows me the chance to continue that service. District 40 and New Jersey have had phenomenal representation by Senator O’Toole, and Assemblymen Russo and Rumana.  Should we be elected, Kristin, Kevin and I will strive to work just as tirelessly in our representation of the residents of District 40 and the State of New Jersey,” said DePhillips, an attorney who has practiced law for the past 24 years.

From 1987 to 1989, he served as a Legislative Assistant and Assistant Press Secretary to U.S. Rep. Marge Roukema in Washington, D.C. He graduated from the Seton Hall University School of Law in Newark, N.J. in 1992. DePhillips was elected to the Wyckoff Township Committee in 2009 and served until January 1, 2013. He served as Deputy Mayor of the Township in 2011, and Mayor of the Township in 2012. He has been a Commissioner of the Northwest Bergen County Utilities Authority since 2012. DePhillips has been Chairman of the 40th Legislative District Republican Committee since 2014. Married to Patricia Reynolds-DePhillips for 21 years, they are the parents of four children and parishioners at St. Elizabeth Church in Wyckoff.

“We are overwhelmed by the outpouring of support from party leaders throughout New Jersey and District 40 as we seek this nomination. In particular we are grateful to Senator Kevin O’Toole, who has agreed to serve as the Chairman of our campaign,” stated Corrado, Rooney, and DePhillips.

Below is a list of endorsements of the Corrado, Rooney, DePhillips Team: