Creative time! It sounds like a ham-fisted attempt to get kids to draw or something, but it’s actually a non-profit organization that has supported compelling, site-specific art work in New York City since 1974.

On Thursday night, the organization had its annual gala and the art world was out in full force. The likes of Jeffrey Deitch, collector Liz Swig, Vogue editor and former Observer scribe Chloe Malle, Anne Pasternak, Anya Rubik, Cindy Sherman and Hank Willis Thomas hit the event, which was held in a hangar of the Brooklyn Navy Yard and featured, err, whimsical beverages, like the “South Beach”—a gin item with cotton candy swirling above the liquid and a powdered situation I was instructed to smell before imbibing said liquid that rested in the bottom of the two-story glass. Sort of like the whole affair, it was a good idea that turned out a little weird.

Miami Design District figurehead Craig Robins and conceptual artist Rirkrit Tiravanija were the evening’s honorees. Mr. Robins, a longtime patron of the arts, gave one of many indecipherable speeches (that hangar space was gorgeously used but did not make for good acoustics).

In a situation reminiscent of one of our all time favorite art world shushing episodes, Creative Time executive director Katie Hollander, who had perhaps, like all of us, indulged in a beverage or two by the time she hit the stage, repeatedly paused her address to utter a full throated “shhhhh.” Because of sexism or just because they couldn’t hear, the crowd—totally hopped up on South Beaches and an unending stream of wine poured by tanned out of work actor/caterers—totally ignored her.

There was something about an artwork with 2,000 pigeons, where you “get to name your own pigeon,” and there was also an auction, which went about as well as the speeches. One item on auction was a hangout with Craig Robins. That went for just over the low estimate, we think. Very little was audible. I named a pigeon, unsolicited and for free, on my way out.

But inscrutable auction or not, the evening raised $40,000 for the organization, which is responsible for stuff like Art on the Beach, a bunch of cool—and free—public sculpture and performance in the 1980s. (The org has worked with loads of important artists in a variety of disciplines, from Vito Acconci to Sonic Youth to Elizabeth Streb.) And the turnip-focused meal was pretty delightful. So here’s to you, Creative Time! Next year maybe do the auction before the socialites talk those beefcake caterers into pouring them tumbler after tumbler of wine. 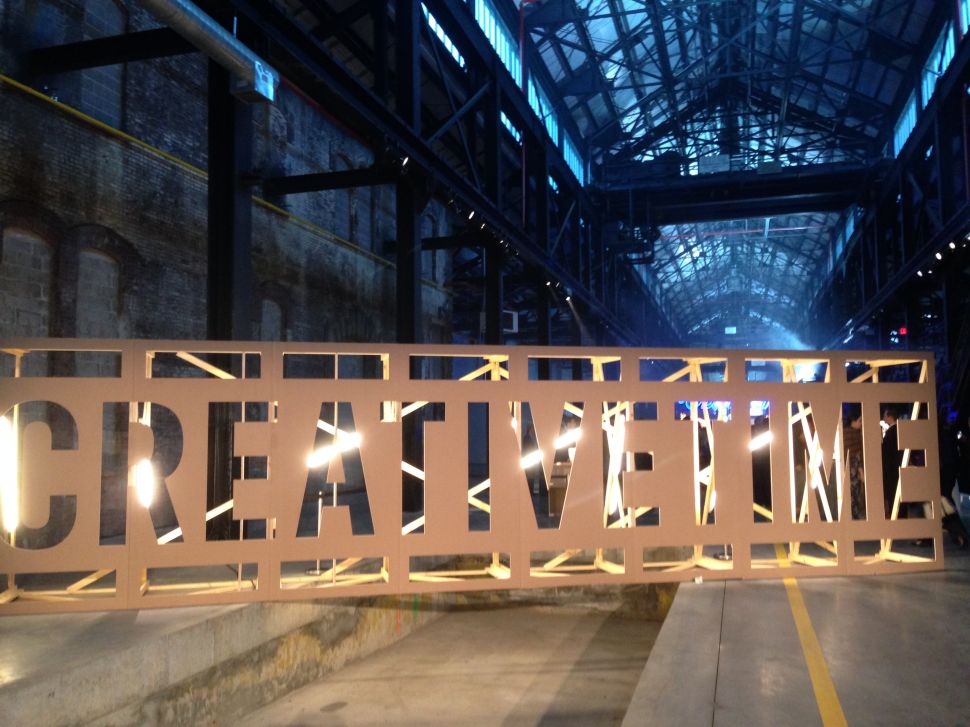