I recently went to Bleecker Street’s Le Poisson Rouge to listen to some music composed by a machine and played by humans on piano, drums and guitar. In a way, it felt like going to see any other indie rock band, but I got the sense that the computer doesn’t have much sense for when a song should come to an end. At one point, late in the performance, the composition spent a few minutes as a mellow Super Mario Bros.’esque theme. Which seems appropriate when you consider that a computer wrote it.

Machines have been making music for a while. The Observer recently reported that IBM Watson has even gotten into it, but the incursions into artistic pursuits don’t stop at melodies. At this year’s SXSW Innovation, I encountered Narrative Science, a company that turns machine-readable datasets (such as overnight movements in commodity supplies or employee performance statistics) into human-readable writing. Machines are composing music and text. Software is coming for creative work, just as it is coming for everything else humans get paid to do.

Aaron Arntz, the musician who led the project that resulted in the Greenwich Village concert I attended, might argue that machines could be ready to take on composition, but they haven’t approached music itself yet. He argues that a composition only becomes music once it’s performed, in a blog post by the DBRS Innovation Labs. DBRS provided him with machine learning experts to build the software behind the night’s composition.

Mr. Arntz has played with bands like Zappa Plays Zappa and Grizzly Bear. He told the Observer after his show that every single bit of music played came from the machine, but that the humans put together the music’s final arrangement.

Mr. Arntz and the DBRS team built a Character-Level Neural Network and trained it on the corpus of keyboard music. The collaborators fed it LilyPond files, because it captures the nuance of sheet music. As they loaded music into the system, they just had to watch to see how it interpreted the inputs.

“It goes to some places I wouldn’t go naturally,” Mr. Arntz said after the show.

What got played was comprehensible music. It made sense to this human’s ears. But was it good? I might not be the person to say, but it seemed to lack any kind of center. It didn’t feel of a piece. Then again, it was composed by an entity that was no more than, say, a few months old. Imagine if an infant managed to write a fully realized concerto. Computers can write more than music. In 2014, a computer composed a 728-page novel based on US Census data and the CIA torture report, as Motherboard reported. It falls wide of readable, but it takes every writer a while to learn.

When I saw Narrative Science’s Kristian Hammond on a SXSW panel, he described how his company has built software that can turn piles of data into texts that can be read and digested by human brains. He said confidently that there would be no standard by which machines won’t be able to exceed humans eventually, including creativity and intuition.

I sat down with Mr. Hammond after the talk for a bit of a freewheeling conversation about where the future might leave people once artificial intelligence can out-write Hemingway. For now, he contended that AI will let the brilliant thinkers of the world do more thinking.

“The mission is based upon the observation that we have an incredible wealth of data at the numeric and symbolic level,” he said. Much of that data is collected under the guidance of experts who understand the right information to look for and who invent the analytical tools to understand it.

The experts don’t want to provide every possible analysis that can be made of data, though. “They don’t want to do the commodity version of their own thinking,” he said. For example, you might rely on some expert’s framework to devise a stock market portfolio for yourself, but you can’t call that expert up every night to ask how your picks are performing in light of his or her system. That said, a computer program could be taught that analysis and send an email every morning specifically assessing your portfolio against it, in plain language, that a person can quickly read and understand. In fact, that’s the sort of work Narrative Science specializes in. It makes content from data for individuals.

So, could the machines eventually begin to analyze popular fiction and start to come up with all new narratives that fit our tastes? Indeed, to ever more narrow tastes? We have already seen greater individuation in fiction as the e-book market has made shelf space infinite. Before e-books took off, novels about werewolves were already a healthy little Fantasy and Science Fiction sub-genre. Since e-books, though, billionaire werewolf romance novels are now a thing.

Will the infinite capacity of AI to write far more than humans can ever, ever read see even more fine grained genres one day? Will it one day be possible to order up whole series of books written for just one person to read?

In the short term, computers might be able to do more mundane work that could help the literary business expand its markets. For example, in writing different versions of a story. Mr. Hammond’s description of how his company digests data-sets brought to mind an episode of the Book Fight podcast, where the hosts and a guest discussed Ernest Cline’s Ready Player One, the mega-popular novel about a mystery set inside a universe-sized virtual world.

The future looks bright for jobs that fight depression

One of the hosts, Mike Ingram, talks about one aspect of young adult literature he finds tedious. He says, “There’s this tendency to really over-explain things, to often explain things three times that sometimes I didn’t even need explained once.”

So maybe novelists will remain the experts and the commodity version of their work would be to take writers’ final products and re-write them for different audiences? In this instance, machines could take Mr. Cline’s original and write the over-explanation out for a version targeted at an adult market. A computer could also rewrite it to help readers attain certain goals while reading, such as one versions designed to include a lot of SAT words or a version with even more explanation, aimed at helping new immigrants acculturate.

If these last couple paragraphs sound like I am trying to convince myself that people with jobs like mine are going to be fine following the dawn of machine consciousness (The Singularity), that’s probably fair. In fact, more and more, thinkers have begun to believe that most jobs will be done by machines long before those machines become self-ware. Sometimes referred to as the economic singularity, it posits that soon so much more work will get done, and done better, by machines that hardly any people will be needed at all.

There’s cold comfort in knowing that as our collective depression grows out of near-universal unemployment, no small number of us will always have work in therapy, massage, recreation, health care and other jobs primarily aimed at making each other feel better about obsolescence.

About a year ago I wrote that that the robots will not take over. The more digging I’ve done into artificial intelligence, the idea that there might soon not be anything much for people to do has become harder for me to believe. I’m not alone.

Provided our robot overlords are benevolent, however, at least we’ll have a digital library more vast than could ever be printed on all the world’s trees to look forward to, along with a supply of new music that will never, ever end. 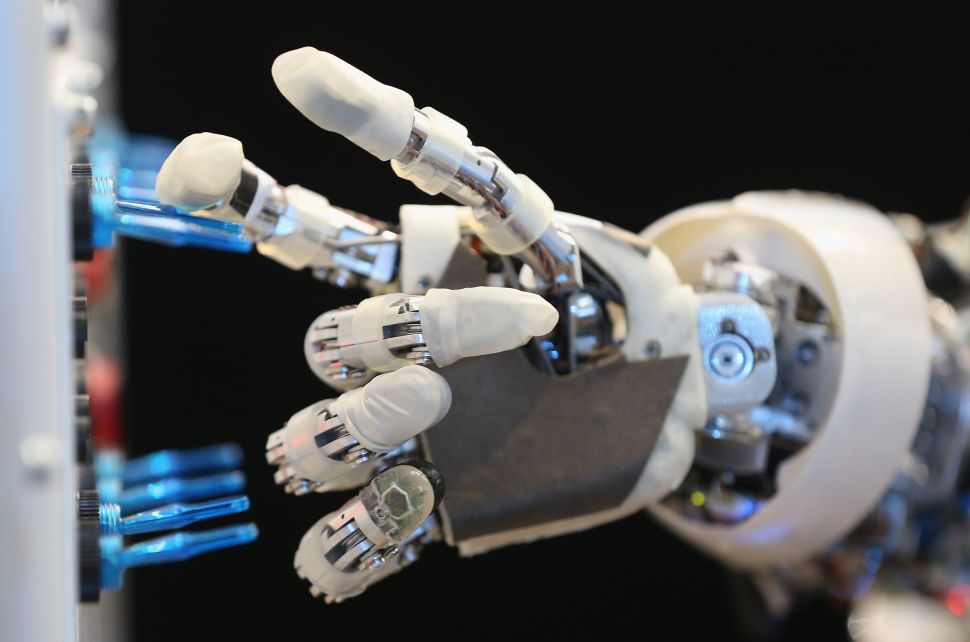