They came in cars, on buses, the Long Island Rail Road. They came from Nassau County, Suffolk, the five boroughs, upstate. Most were white, but not all. Most were middle-aged, but there were plenty of millenials among them. They wore Masonic temple jackets, camouflage gear, union hoodies, veteran caps—and of course, the ubiquitous red hats emblazoned with the slogan “Make American Great Again.”

They had come to stand on an interminable winding line in a slashing wind, and stand again crammed in a vast, drafty warehouse at Grumman Studios in Bethpage, Long Island, and wait several hours before the main event began. They had come to see Donald Trump, the Republican presidential front-runner. And, according to the candidate, they numbered 20,000 in all: 15,000 inside, 5,000 waiting outdoors (the New York Times reported 18,000 people had requested tickets, and police put the capacity of the hangar space at 12,166).

Waiting for the shuttle bus at the LIRR station, attendees explained why they had come to see the Queens-born developer bring his campaign roadshow to his native state.

“This is the first time that we have an opportunity to get somebody who’s not actually a part of the system, to become a part of the system, to be able to possibly make changes,” said Manuel Alarcon, a 46-year-old Conservative Party activist on Long Island. “I like basically that he’s independent, I like his attitude, I like his fortitude, I like the outlook he has for America, to turn it around and bring it into a totally different situation.”

Others saw even more serious stakes to the election.

“Many people don’t realize the entire Western civilization is under attack,” said one 21-year-old supporter, who declined to give his name but said he was a Navy recruit on break from bootcamp. “You see it with the Syrian refugee crisis, and with our porous border—it’s a deliberate effort to completely introduce a voter base that’s loyal to one party and one ideology.”

Mr. Trump’s centerpiece policy—deporting some 11 million undocumented immigrants and constructing a massive barrier along the Mexican border—was a reason many at the rally gave for attending. Sporadic chants of “build the wall” broke out among the crowd at Grumman in the hours before the brash businessman appeared.

Nassau County Executive Ed Mangano—an ally of Trump critic Gov. Andrew Cuomo—and Buffalo businessman Carl Paladino, Mr. Cuomo’s 2010 Republican opponent, hyped the billionaire before he came out on stage. Mr. Trump’s crushing loss in the Wisconsin primary last night to Ted Cruz was the unspoken subtext to their remarks, though it did not seem to dampen their enthusiasm.

“It finally made it to New York. Our native son is here now. Our native son, this guy born and raised in New York, who won’t apologize—he doesn’t apologize to anybody, for anything,” said Mr. Paladino, known for his own unapologetic style.

The real estate magnate strode onstage to blasting strains of “Get Ready for This” and raucous applause.

The tirade sounded a little like a rock band rehashing its greatest hits: “knock the hell out of ISIS,” “take care of our vets,” “we don’t win anymore,” “we’re bringing companies back to the United States,” “take the oil,” “I will beat Hillary so bad,” “the press is so dirty”—and the biggest crowd-pleaser of all—”we are going to build a wall.”

“Who is going to pay for the wall? Who?” he said—to a shattering response of “Mexico!”

But amid his diatribes against Mr. Obama and the outsourcing of manufacturing and devious Syrian and Mexican migrants, he tore into Mr. Cruz, who held a much smaller gathering at a restaurant in the Bronx this afternoon. The belligerent billionaire recalled his closest rival’s attack on “New York values” at a forum in Iowa in January.

“Do you remember during the debate, when he started lecturing me on ‘New York Values,’ like we’re no good?” said Mr. Trump, recalling how he had evoked the 9/11 attacks in response. “There was never anything like it in the history of this country, the worst attack in the history of the United States. The bravery that we felt was incredible.”

“And I got this guy over there, looking at me, talking about ‘New York values,'” he continued.

The audience responded with a chorus of boos and calls of “lyin’ Ted.” The loss to Mr. Cruz in the Green Bay State went unacknowledged.

Protesters punctuated the rally a few times, their shouts inaudible over the speeches, music and cheering. The crowd encircled them with chants of “Trump! Trump! Trump!” and the candidate warned his supporters from the stage not to hurt the demonstrators, a reminder of the repeated flare-ups of violence at past rallies.

Finally, the mogul concluded by reminding the audience to pack the poll sites in the April 19 primary. 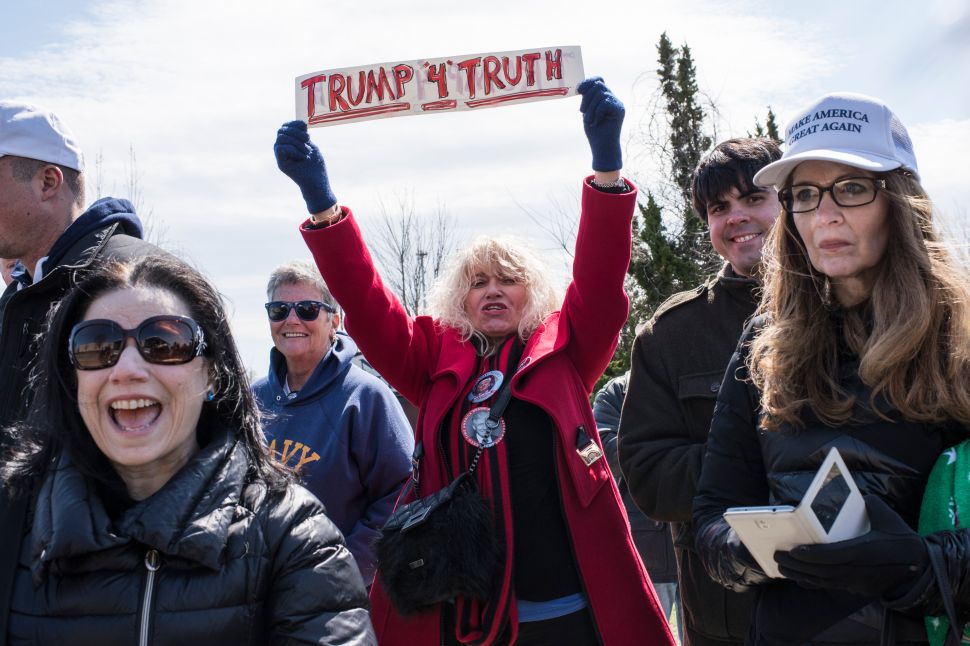