New York was to be the flagging Republican front-runner’s trump card.

After falling in Wisconsin, after getting outmaneuvered and embarrassed in the scramble for delegates in Colorado and Wyoming, Donald Trump needed a big victory at home to break his slump. The size of his win, and how many or the Empire State’s 95 delegates he’ll take to the convention, remains to be seen—but news organizations called the Republican primary for him seconds after the polls closed, and the it appears to have given him his largest margin of victory yet.

Mr. Trump trumpeted his triumph from his eponymous tower on Fifth Avenue, a Xanadu of marble and brass. The candidate took the podium to blasting strains of Frank Sinatra’s “New York, New York.”

He then launched into a familiar tirade against outsourcing of jobs, the “disaster” of Obamacare, illegal immigration, the Veterans Administration and the alleged atrophying of American military strength under President Barack Obama.

The Queens-born billionaire has only a narrow path to winning the 1,237 delegates necessary to clinch the nomination before the convention, and wringing as many votes as possible out of New York was crucial to his victory strategy.

“Senator Cruz is just about mathematically eliminated,” Mr. Trump said, alluding to the near impossibility of the Tea Party icon collecting enough support to take the nomination on the first ballot at the convention. “We’ve won millions and millions more votes than Senator Cruz, millions more than Governor Kasich.”

The candidate also argued the slew of Eastern seaboard states due to vote over the next few weeks will bolster his populistic campaign. Mr. Kasich interpreted the calendar of upcoming primaries as favorable to himself, insisting that the arch-conservative Mr. Cruz has no shot with the more moderate voters who live there.

The Ohio governor won Manhattan, where Mr. Trump lives. But the belligerent builder won three of the four congressional districts that divide New York County—just as he won almost every congressional district in the five boroughs. However, in each of those three Manhattan districts, Mr. Trump fell short of the crucial 50 percent mark and will have to split the delegates.

Mr. Kasich did win the Upper East Side-based House seat where Mr. Trump resides by 70 votes, and he carried a total of three delegates statewide.

In his victory speech, Mr. Trump touted the “unity” of his “evolving” campaign team, which has undergone several recent shake-ups—notably the apparently demotion or diminution of campaign manager Corey Lewandowski. Florida authorities had the controversial operative arrested in March for allegedly assaulting a reporter in Florida, only to drop the charges a week ago.

Mr. Lewandowski seemed to make a point of remaining visible at tonight’s event, speaking with reporters prior to Mr. Trump’s appearance.

Updated to include quotes from Mr. Trump, Mr. Lewandowski and the Kasich campaign, and to reflect the latest poll and delegate numbers. 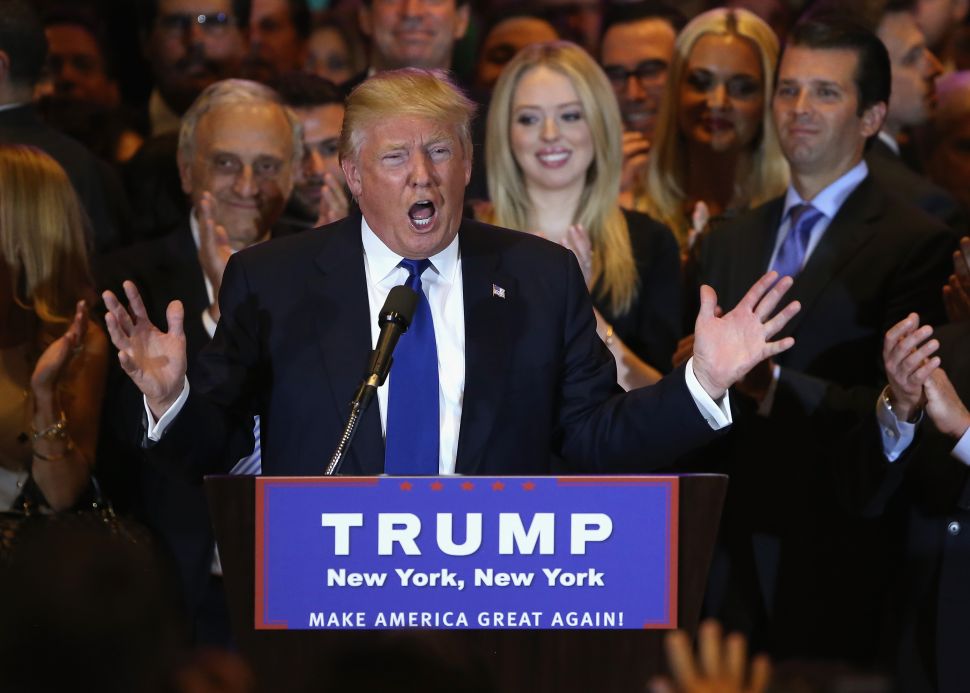