On a blazing blue spring Sunday in Chelsea, as the Annual Persian Parade marches noisily down Madison Avenue and, across the river, Sanders supporters rally in Prospect Park to celebrate the Democratic spring, and way uptown the Yankees play the Mariners, three actors sit around a large round table in a shadowy backroom upstairs at the Jue Lan Club behind the old Limelight. The stars of The Phenom, premiering at Tribeca and opening theatrically June 24th, wear shades of grey and black, receiving visitors like multi-generational mobsters at a family wedding.

The trio is Oscar-nominated stars Ethan Hawke, who plays the felonious father of a baseball pitching prodigy. Beside him sits low-key Oscar-nominee Paul Giamatti as the sports shrink with a past he’d prefer to keep hidden under his couch. On his left is the acting prodigy Johnny Simmons who plays the title role as The Phenom, a brilliant young pitcher busted down from the majors to the minors when he gets the jitters, which he calls the “Yips,” losing his mojo and control of his 98 mph fastball.

For all three actors, the concept of the Yips, defined as extreme anxiety causing athletes to lose their motor skills, cuts close to home. They know – and fear — the parallel in their own field. Simmons (The Perks of Being a Wallflower) opened up: “sometimes I feel I  have no idea what I’m doing as an actor. I just did a tape for the TV remake of The Rocky Horror Picture Show and I think it could be the worst thing I’ve ever done.”

At Simmons’s side, Giamatti consoles him: “I feel that way all the time.”

Simmons, who is quietly terrific in The Phenom, continues “And then I got the actor version of the Yips,”

“Performance anxiety,” Giamatti says, shaking his head empathetically before turning the topic to baseball. (His father, A. Bartlett Giamatti, was the seventh Commissioner of Major League Baseball.) “Like Chuck Knoblauch which is why I found this movie so interesting.”

And that’s when Hawke starts finishing Giamatti’s sentences. “Knoblauch couldn’t make the throw to first as shortstop. They ended up moving him to first base.”

“…It was crazy,” Giamatti says talking over Hawke.

“He had been making this throw to first since he was a sophomore in high school,” Hawke fills in, ” you would watch him and you couldn’t believe how crazy it is that all of a sudden he can’t make the throw.”

Giamatti picks up the ball: “It was nuts when they get to the level where they’ve thrown that same throw thousands of time. Your body memory is just doing it for you.”

“And then there’s that added pressure and all the people watching,” adds Hawke. “People would put on helmets as a joke to him, as if they were going to get hit. Some have had total mental breakdowns.”

Adds Giamatti. “It’s enough pressure just to perform that freakish. And on top of it, you have a thousand people screaming and zillion-dollar endorsements and the celebrity. You can’t get away from it. Even if you turn it off you’re going to get in a fucking cab or it’s going to be streaming somewhere so it is hard to get away from”

“But Kobe,” interjects Hawke, “being able to have such a consistent career and then also go through such a trial being publicly brought down while Tiger Woods going through the same thing and his game never came back after that. Kobe was able to get past that.”

Giamatti asks the trenchant question: “Why is one guy able to do it and not another?” That’s the razor’s edge on which The Phenom balances – whether the subject is professional athletes or Oscar nominees like Hawke and Giamatti. 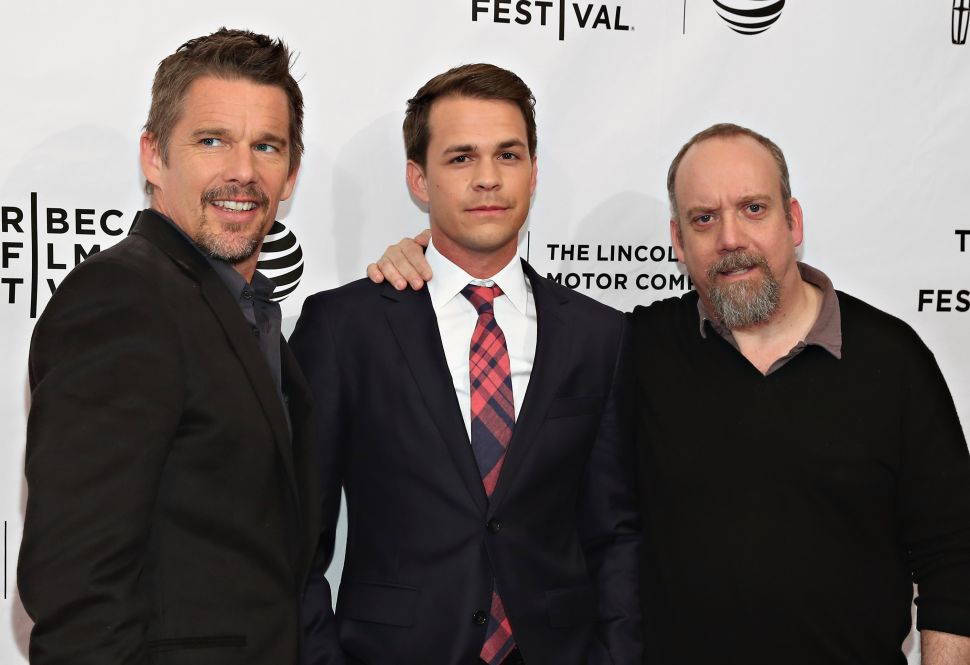