The festival’s mission is to help filmmakers reach the broadest possible audience, enable the international film community and general public to experience the power of cinema and promote New York City as a major filmmaking center.

At the time of its inception in 2002, the primary goal of the event was to help New Yorkers heal from the events of 9/11 by bringing people together in lower Manhattan to help revitalize the area. The festival now draws an estimated three million people, generating approximately $600 million annually for the city.

Bloomberg Philanthropies has been a sponsor of the event since that very first year and continues to help the festival expand and develop its slate of offerings. This year, in celebration of the 15th year of the festival, the company has created a trailer that will run before all public events.

“We’re sentimental about this anniversary,” says Katherine Oliver, Advisor to Bloomberg Philanthropies and Principal at Bloomberg Associates. “You can see in this piece that we wanted to be reflective about where we were then and where we are now.”

Oliver says that the video shows the true journey of the city of New York in a unique way. “When you listen the narration of the trailer, it’s introspective of what happened in the city and, yes, it’s sentimental and sobering, but it ends in a very positive way; on the note that the best is still yet to come and that’s something I think everyone in this city truly believes.”’

Bloomberg isn’t just a sponsor of the festival in name only. They’re also hosting Tribeca Imagination Day, an event that brings together influential, provocative, and groundbreaking creative minds for a summit discussing emerging technologies and how those innovations are applicable in both traditional and non-traditional storytelling formats.

“Bloomberg is involved in both the storytelling business and the technology arena so this event hits the sweet spot for us,” explains Oliver. “We’re extremely excited to be able to bring so many pioneering minds together at one time and showcase what they’re doing to advance the creative industry. The hope is that now only will these discussion educate people but that they’ll inspire many more ideas as well.”

The film and television work taking place in New York currently has an $8 billion a year impact on the city. Over 130,000 people are employed in the industry, says Oliver. “In addition, that work supports over 4,000 ancillary businesses, business like dry cleaners, florists and entities like that. These are not small figures so it makes sense to pay attention to what’s going on and work to build on that.”

Oliver goes on to say that while the Tribeca Film Festival has come a long way, its evolution is not now, nor will it likely ever be, truly complete. “This event may have been born at a troubling time but it’s an amazing illustration of how a community can come together and help something grow and grow. It’s just so exciting to see all the things that are happening this year. It’s also really thrilling to look to the future and know that every year we’ll continue to celebrate new technologies and discern how they’ll enhance storytelling.”

The cutting edge work being presented and discussed is in all in keeping with the spirit of the festival, and this is all showcased in the new Bloomberg trailer, says Oliver. “We wanted to capture both the history and the excitement that the city feels about the festival in this short piece. It was a lot to accomplish in forty-five seconds, but I truly think we’ve done that. I hope that people will take just that minute to reflect and be inspired. It’s worth the time, really it is.”

Giving credit where due, Oliver explains that the trailer is a production of @RadicalMedia, created by Jon Kamen. RadicalMedia is also credited with creating the now familiar Made in NY logo seen on countless production entities throughout the city as films and television shows are being made. “They’ve been with us since the beginning of the movement to increase the awareness of production in the city so it’s very fitting that they created this,” explains Oliver.

“It’s really amazing every year to see how the festival is such a big catalyst for the film and television industry,” says Oliver. “I think you can really see the spirit of our city in this piece that we’ve created and in every single film, TV series, discussion and interactive event that takes place during the festival. All of it celebrates the melting pot of creativity that is unique to New York. No matter who you are, you should be very inspired by and proud of that.”

The Tribeca Film Festival runs from Wednesday, April 1th through Sunday, April 24th.  A schedule of events and tickets are available through the event website here.

For more from Observer on the TriBeCa Film Festival and TFI Interactive, click here. 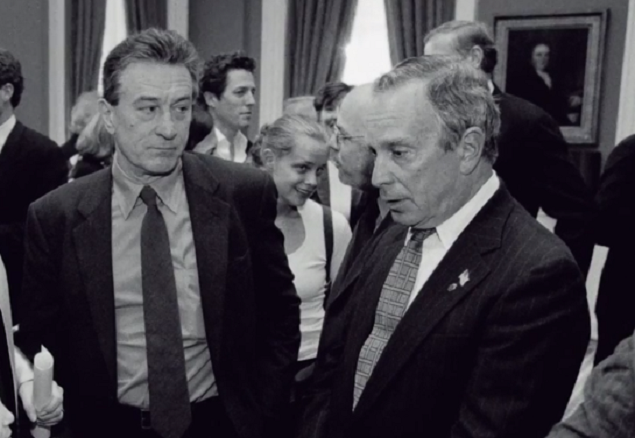