Bernie Sanders tries to cultivate the idea he is different from other politicians: more truthful, more consistent, less compromised.

I have known Bernie’s older brother Larry for 25 years. He was a regular at our Shabbat dinner when I was Rabbi at Oxford University, and I came to enjoy him greatly. Larry and I differ mightily on politics and Israel, but I never questioned the sincerity of his beliefs. He was always a gentleman.

Coming from the same stock, I expect the same of Bernie—we don’t have to agree on the issues, but we have a right to expect truthfulness. It is too bad that, when it comes to Israel, Bernie doesn’t even seem to be making an effort.

His latest whopper is one of a number of disturbing comments he has made about Middle Eastern politics in general and Israel in particular.

In an interview with the editorial board of the New York Daily News, Mr. Sanders called Israel’s actions during the 2014 war in Gaza “disproportionate,” based on his “recollection” that more than “10,000 innocent people were killed in Gaza.” I might dismiss this malicious claim as an honest mistake—evidence of his ignorance about Middle East affairs—if it weren’t for other statements Mr. Sanders has made that expose a disturbing animus toward Israel.

First, let’s set the record straight. Approximately 2,100 Gazans were killed in the Gaza war, of which roughly half were terrorists. Mr. Sanders exaggerated the casualties by 400 percent, a magnitude of inaccuracy that is deeply unsettling.

Second, let’s add the context Mr. Sanders ignored. Hamas has openly declared its goal is to destroy Israel and kill Jews everywhere. To that end, Hamas has used Gaza as a base to mount terror attacks and launch thousands of rockets since Israel withdrew all its citizens and soldiers from the area in 2005.

Third, not a single Gazan would have lost his life if Hamas had not indiscriminately fired rockets into Israel. Few, if any, civilians would have been harmed if they had heeded the Israeli military’s warnings to evacuate battlegrounds, and if Hamas had not used them as human shields. Prime Minister Netanyahu expressed it best when he said that while Israel uses its missiles to defend its citizens, Hamas uses its citizens to defend its missiles.

If Mr. Sanders was briefed on the conflict, he would know that the Hamas headquarters was in a hospital and that arms were stored in schools and mosques.

Now he has to begin to show sensitivity to a tiny democracy fighting for its survival while surrounded by genocidal Islamist foes.

Like too many of his rivals, when confronted with the inaccuracy of his statement, Mr. Sanders refused to acknowledge his mistake and compounded it by leveling a second erroneous and malicious charge against Israel. When the editors of the Daily News suggested the “number appeared to be rather inflated,” Mr. Sanders doubled down. “I don’t have it in my number,” he said, “but I think it’s over 10,000. My understanding is that a whole lot of apartment houses were leveled. Hospitals, I think, were bombed.” No Bernie, hospitals were not targeted. Rather, the Hamas leadership ran the war from the basement of a hospital.

Mr. Sanders’ defamation of Israel is unfortunate. This is a man who I really want to like personally, even if I rebut his politics. I’d love to feel the Bern, and even invited him to our giant May gala in Times Square.

But his voting record in Congress gives me pause. In 2001, Mr. Sanders was the only Jewish member of the House who disagreed with a resolution blaming all of the violence of the Second Intifada on Palestinian terrorism. He was one of 45 representatives in 2004 who voted against a resolution expressing support for Israel’s security barrier, which has greatly reduced the number of Israelis murdered by terrorists, after the wall was deemed illegal by the International Court of Justice. Mr. Sanders was one of 21 U.S. Senators who did not sign onto a resolution expressing solidarity with Israel during 2014’s Gaza War.

Anyone hoping for an improvement in the relationship between the United States and Israel has to ponder Bernie’s comment: “I gotta tell you, I am not a great fan of President Netanyahu… And I think in that region, sadly on both sides, I don’t think we have the kind of leadership that we need.”

He was quoted in Haaretz saying, “The United States will support the security of Israel, help Israel fight terrorist attacks against that country and maintain its independence. But under my administration, the United States will maintain an evenhanded approach to the area.” What we’ve often seen before is how “evenhanded approach” is code for one-sided pressure on Israel.

Ignoring the neighborhood in which Israel lives, Mr. Sanders has also said, “My long-term hope is that instead of pouring so much military aid into Israel, into Egypt, we can provide more economic aid to help improve the standard of living of the people in that area.” Instead of providing essential aid to give Israel the qualitative military edge it needs to defend its citizens, Mr. Sanders said, “It is wrong that the United States provides arms to Israel.”

I fear Mr. Sanders does not recognize that Israel, the lone democracy and reliable ally in the region, helps promote American values and interests. Instead, he wants to keep the money at home even though aid to Israel is an infinitesimal portion of the national budget. But 75 percent of military assistance to Israel is spent in the U.S., where it creates jobs and supports the local economy of the towns where defense contractors are based. Furthermore, joint research on missile defense systems and other weapons programs benefits the U.S. military as well as the Israel Defense Forces.

Mr. Sanders also is apparently unaware of the billions of dollars in international aid already provided to the Palestinians, which has made them the largest recipients of aid per capita in the world. Bernie appears slightly ignorant of the fact that not a single home has been built for any refugees in camps in Gaza with those billions, and that much of the aid was siphoned off by Hamas, Yasser Arafat and other members of the Palestinian Authority Kleptocracy.

But for me what is especially troubling are Bernie’s rose-colored views on Iran. Beyond supporting the catastrophic nuclear deal, he believes the United States should “move as aggressively as we can to normalize relations with Iran,” and claims we are “seeing a thaw in our relationships with Iran.”

I know Bernie cares about human rights. Shouldn’t the United States insist on gays not hanging from cranes, women not being stoned to death and protesters not being shot in the street before we normalize relations?

Surely Bernie is also concerned with the continuing Iranian condemnations of the United States, the ongoing “Death to America” chants, the illegal ballistic missile tests, the genocidal threats against Israel, the provocative words and actions directed at our Gulf allies, the military engagement in Syria, the subversion in Iraq, the support for Hezbollah and other terrorists and the kidnapping and humiliation of American soldiers.

Bernie does say he believes in Israel’s right to exist in peace, and that the Palestinians “must fulfill their responsibilities to arrest terrorists, confiscate terrorists’ weapons, dismantle terrorist organizations, halt all anti-Jewish and anti-Israel incitement and recognize Israel’s right to exist.” In return, he said, the Israelis “must end their policy of targeted killings, prevent further Israeli settlements on Palestinian land and prevent the destruction of Palestinian homes, businesses and infrastructure.”

But this attempt at evenhandedness equates terrorism with counterterrorism. Israel would not engage in targeted killings or destroy any homes if it were not being attacked by Palestinian terrorists. The Palestinians were offered numerous peace plans, including offers to withdraw from 97 percent of the West Bank and establish a Palestinian state. Their response has been renewed terror waves against Israel and thousands of rockets launched at Israeli cities.

Furthermore, Bernie needs to talk to Israelis about how they feel about the possibility of a Hamas takeover of the West Bank—which is the terrorists’ goal—and Israelis’ willingness to risk their lives by ceding additional territory after the experience in Gaza. The oft-mentioned belief in trading land for peace was tested when Israel withdrew from Gaza. It proved to be a catastrophic failure, as Israel exchanged land for rocket bombardments and other terrorist attacks.

Last September, Bernie held meetings with the Jewish community of Iowa and compared himself to Israel’s first Prime Minister David Ben-Gurion, which shows that Bernie does, after all, identify with Israel on some level. Now he has to begin to show sensitivity to a tiny democracy fighting for its survival while surrounded by genocidal Islamist foes.

Shmuley Boteach, “America’s rabbi,” is the international best-selling author of 30 books, winner of The London Times Preacher of the Year Competition and recipient of the American Jewish Press Association’s Highest Award for Excellence in Commentary. He will shortly publish The Israel Warrior’s Handbook. 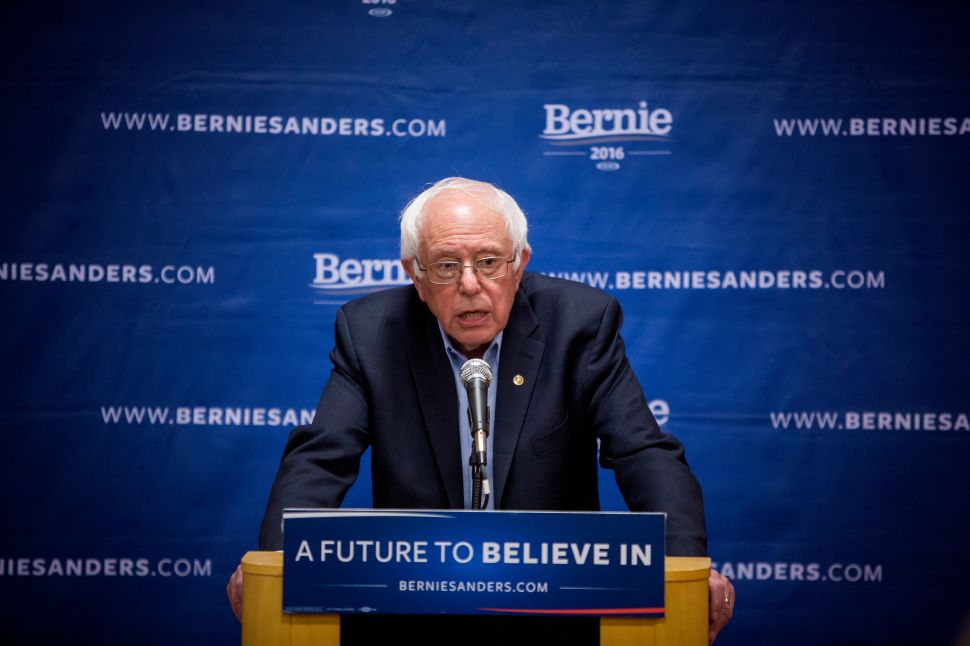