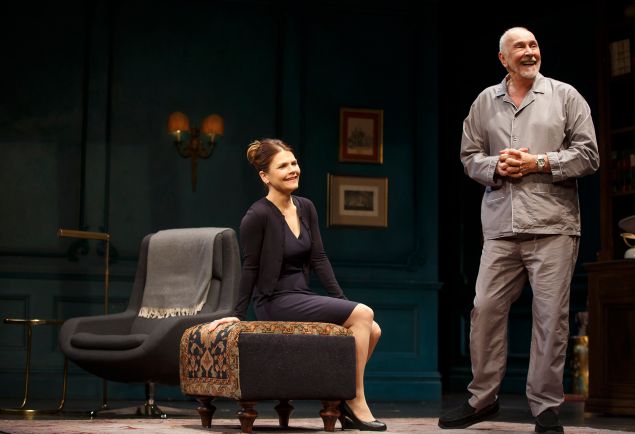 When the curtain rises on The Father, the extraordinary new play translated by distinguished playwright Christopher Hampton from the French text by Florian Zeller, at the Samuel J. Friedman Theatre on Broadway, marvelous Frank Langella enters tentatively as a man named, simply, Andre. Although his eyes are unaccustomed to the daylight bouncing off the green walls of a gorgeous Paris apartment, lavishly designed by Scott Pask, his hesitancy turns to belligerence, defiance and anger. The play begins, as the man’s confusion mounts.

His daughter Anne (solidly played by seasoned actress Kathryn Erbe of Law and Order: Criminal Intent fame) tells him she wants to leave Paris and start a life with a new lover in London, but she expresses trepidation about deserting him when he needs help. But what is going on? Anne has been married 10 years, and Andre is unaware of any lover in London. He insists he can take care of himself and rejects all offers of aid or interference. In the next scene, Anne’s husband Pierre appears, informing Andre this is not his flat at all, and another woman joins them, insisting she is the real Anne and she isn’t married at all. Next, the first Anne brings on the real Pierre, the man she’s been living with since her divorce, and she has no plans to move to London at all. Is everyone trying to drive the father insane? Or is he suffering from terminal dementia? People come and go, pretending to be the same people. Now it’s the audience that joins Andre in his melting confusion. There’s a beguiling trajectory emerging, but it changes in every scene. How long before The Father makes sense?

Not long at all, thanks to the crystal clean writing and a superbly shifting cast. By the time another man arrives and slaps the bewildered Andre across the face, a hospital utility bed is wheeled into the living room, now devoid of its elegant furniture, without Andre’s approval or permission. A light breaks through. He has landed at last in an old folks’ home and the man who slapped him is now the doctor. We finally gasp at the recognition that what we have been witnessing—the shifting dramatic moods Frank Langella has brilliantly put on display—are the tragic, consuming phases of Alzheimer’s. He begins arrogantly, irritated by the confusion that has confronted him. By the end, he is barefoot, clad only in pajamas, and crying out in despair for his Mommy. It all comes through. What we have seen is the gradual disintegration of a man in the final surrender to infancy.

Ask anyone who has dealt in any way, large or small, with the septic mental decay of Alzheimer’s and they will tell you about the various stages a victim goes through before every vestige of intelligence and self-control fades away. This is what we see and feel in The Father. It’s a subject that has been around a few legitimate stages before, but this is the first time I have seen it portrayed with such freshness, originality and insight. Zeller’s writing and the forceful, confident direction by Doug Hughes unpeel the layers of what Andre is going through as it happens. We see only what he is seeing and feel what he is feeling as it happens to him, not to the characters around him, which explains the confusion. And acting as a tour guide to the dark side, Langella takes us through the daunting emotional terrain in gulps of stunning reality. Poignant, lacerating and heartbreaking, he delivers a subtle yet titanic performance inThe Father that can only be described as electrifying. Don’t even think about missing this one. 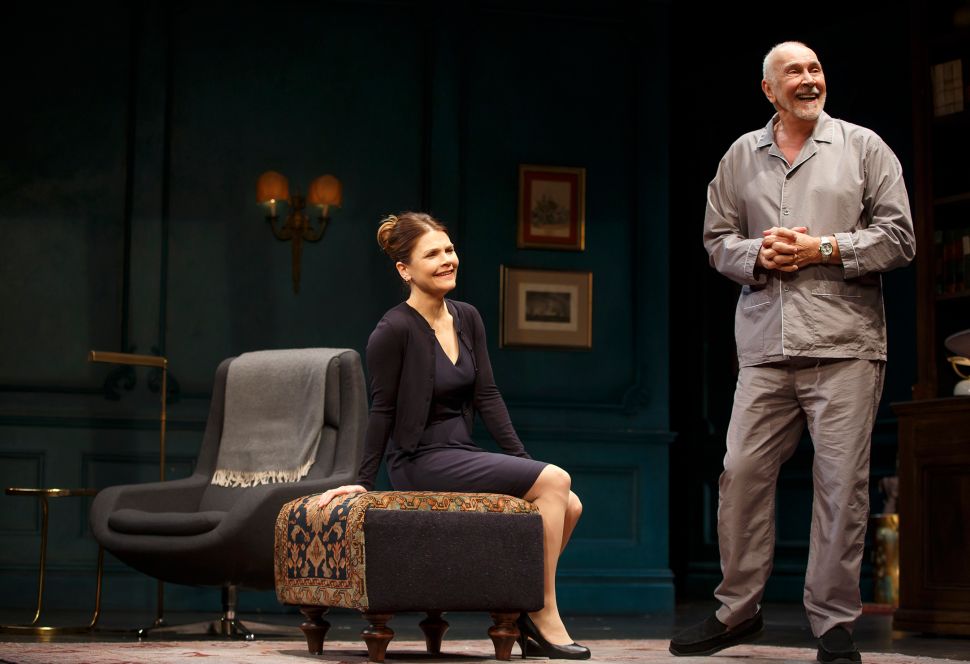