Frank Stella knows how to crack a good joke. On Wednesday, during an informal talk with Art in America editor Lindsay Pollock for the annual Appraisers Association luncheon at the ritzy New York Athletic Club, the 79-year-old artist proved he’s far from shy about sharing his feelings on art, inspiration and newfound celebrity. The soft spoken artist had attendees laughing nonstop.

An excited crowd of art dealers, market experts and press packed the regal dining room overlooking Central Park for a chance to hear Mr. Stella, this year’s honoree and guest speaker. The room was so crowded, luncheon co-chair Nancy Harrison announced that not only did tickets sell out, they were so “impossible to get” that there was a wait list. Past honorees have included big named artists such as Ilya and Emilia Kabakov, Ai Weiwei and Christo and Jeanne-Claude. And while Mr. Stella is certainly no newcomer to the scene—world famous for his boldly colored geometric canvases and unwieldy sculptures—he has become something of a bonafide star following his widely praised 2015 Whitney Museum retrospective. But despite the attention, he remains modest, at times cynical, and utterly spirited.

Following an address from keynote speaker Thomas Crow, a historian and professor of art at NYU, Mr. Stella took the stage with Ms. Pollock, who warned that their discussion would move quickly and be prompted by projected slides that featured his work.

“Whatever,” Mr. Stella proclaimed, holding his hands up with an amiable shrug, more than willing to go with the flow.

Ms. Pollock began by asking him how involved he was in the planning of his Whitney retrospective, and to comment on collaborating with museum director Adam Weinberg.

“It depends how aggressive he [Mr. Weinberg] wants to be,” Mr. Stella said.

“And how aggressive was he?” responded Ms. Pollock.

With a level of sincerity rarely seen when discussing the inner workings of bureaucratic institutions, the artist provided insight into the politics behind mounting a major museum solo show, pausing intermittently for effect. “You can’t lay out a museum yourself,” he said. “They build the walls and then it’s over. Once they build them, they tell you how expensive it was. When they’re done telling you how expensive everything is, then they tell you they’re losing time.”

On the seriality of his work, particularly his Moby Dick series, Mr. Stella rejected the notion that his ideas were as neatly preconceived as history suggests. “The Moby Dick series wasn’t necessarily a series,” he said. “I just gave myself permission to do whatever I wanted and call it a Moby Dick piece.”

Mr. Stella is known as much in his appearance for his signature big rimmed glasses and curly hair as he is for puffing on cigars. In 1995, he was even profiled by Cigar Aficionado magazine, which chronicled the beginnings of his now iconic smoke ring series of photographs, prints and sculptures. When Ms. Pollock called upon an image of two works from the series, Mr. Stella took the cue and appropriately reached for a cigar in his pocket. “I can only do this because my wife’s not here,” he chuckled.

“Are you still making those paintings?” asked Ms. Pollock, referring to the smoke series.

“Still milking it,” he replied.

The conversation jovially flowed from there. Mr. Stella remarked that his monumental steel work, Raft of the Medusa, which was gifted to the Whitney by collector and chairman emeritus Leonard Lauder (for whom the museum’s building was recently named) resembled debris you might find laying around the Department of Sanitation Department.

Of course, the topic of his lengthy and often extravagant titles was broached—he has named paintings with references from literature, history, and even wildlife over the years. “I was desperate to get away from Moby Dick, but I was still on the ,” Mr. Stella said of his work Raft of the Medusa.

In regards to the 40-foot-long painting Earthquake in Chile, which greeted visitors with a bang at the entrance of his Whitney show, Mr. Stella said, “You wouldn’t have enjoyed the number of discussions we had about the entrance.”

Mr. Stella was an early adopter of digital imaging software, which he uses to help realize his large-scale sculptures. Drawing, he said, is often just a diagram for his three-dimensional pieces. For AiA‘s October 2015 issue, the artist conceived an original artwork for the cover. When asked about his use of computer intervention for the piece, he replied once again with a shrug. “Well … it’s Photoshop,” he said.

While the crowd were eager to hear more of Mr. Stella’s off the cuff comments about his pioneering paintings, he still had art to make. Before wrapping up, Ms. Pollock offered the artist a chance to say any final thoughts he might have.

“No, I think I got enough off my chest,” he quipped.

Ms. Harrison gleefully told Mr. Stella as he exited the stage, “If you ever stop making art, you could always consider standup comedy.” 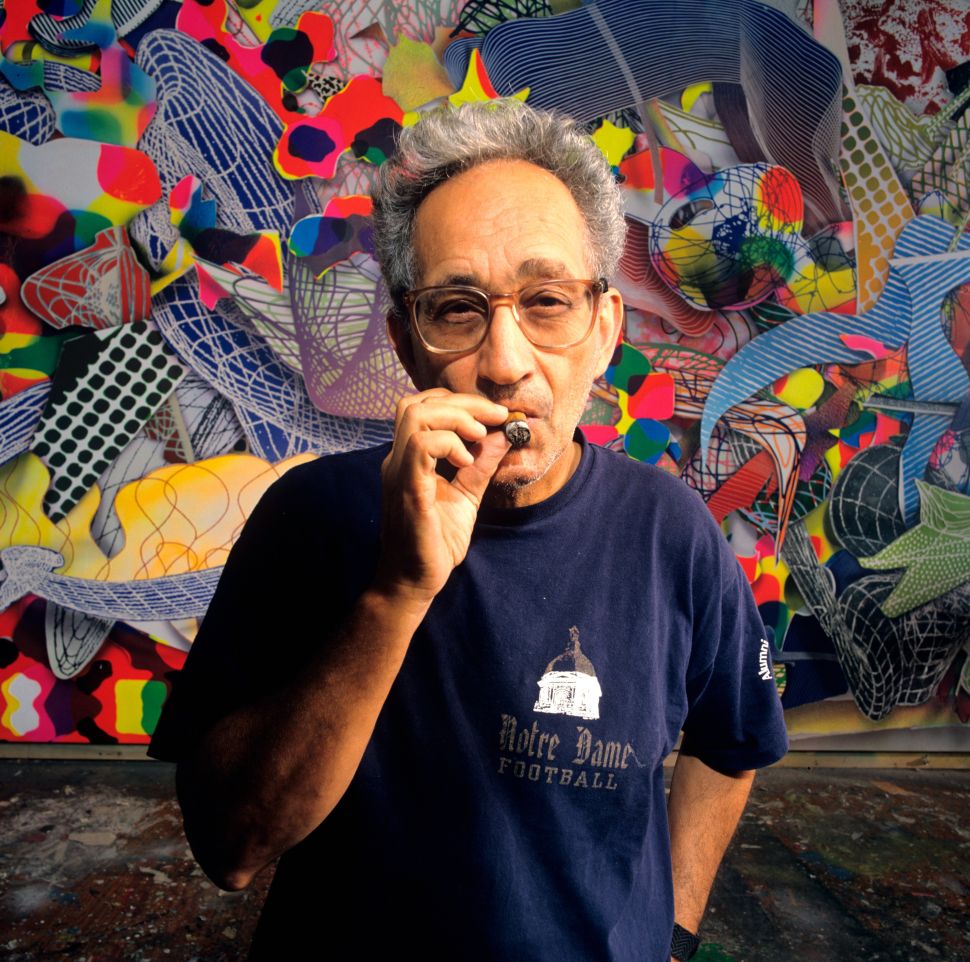