Like a cheap, drunken night at a Braavosi brothel, Game of Thrones usually leaves us with far more questions than answers. Each week, we’re going to take a deeper look into every single Q HBO’s fantasy mega-hit needs to A. Next up: 400-year old witches, giant undead monsters, and a Meereenese delicacy–filet o’ Lannister.

What…exactly is the deal with Melisandre?

On its rough, wrinkly surface this question isn’t really that complex. Melisandre is just old; really, really old, somewhere between 100 and 400 years, depending which interview with Carice van Houten you’re reading at the time. The Red Woman has been using potions, powders, magic, and illusion for centuries to appear younger than she is. (Which, admit it, is the first thing you’d do with potions, powders, magic, and illusions.) Hell, she basically told Stannis Baratheon’s wife Selyse what she was doing all the way back in season three.

The real question here is the same one you’ve been hearing at every gathering, party, public setting, and any time you closed your eyes for the past year–What does it mean for Jon Snow? Well, potentially, a lot.

Back in season season 3’s “Kissed by Fire” The Hound chopped Beric Dondarrion into literal pieces, which actually wasn’t as big a deal for Dondarrion as you’d think thanks to the resurrection abilities of Thoros of Myr. However, as Thoros later tells Arya, “It’s not getting any easier” to bring Dondarrion back. He’d only done it six times at that point.

Flash on over to Melisandre, who has been using Lord of Light hocus-pocus for roughly 300 years longer than Thoros. And watch that final scene in “The Red Woman” again. It looks like a moment of great hesitation, pressure, and soul-searching. Could it be that Melisandre HAS the power to bring Jon back, but one last resurrection will be the one that turns Melisandre into someone who uses powder into an actual pile of it?

What the heck is Bran doing standing on two legs?

Previews of “Home” show the return of Bran Stark, who took season five off to eat Jojen Reed (allegedly). What’s more, we’re seeing a lot of photos and footage of Bran doing something he hasn’t done since the very first episode: standing upright.

So, what’s the deal? The official synopsis from HBO says simply “Bran trains with the Three-Eyed Raven.” What this fails to mention is that the Three-Eyed Raven’s brand of training happens mostly in your mind, maaaaan. Bran’s getting a North-of-the-Wall crash-course on Warg-ing, which means he can’t actually walk but CAN hop into the minds of everything from Direwolves, to crows, to trees. Remember the trees. The trees are going to be important.

It’s worth noting that the Three-Eyed Raven will be played by the fantastic Max von Sydow, who was murdered so hard by Kylo Ren in Star Wars: The Force Awakens his spirit literally turned into a bird and traveled to Westeros.

What’s about to go down at The Wall?

So (deep breath) according to HBO “the Night’s Watch stands behind Thorne,” which is a marked change from the premiere where the Night’s Watch collective opinion was “yargh grumble grumble.” Now, they’re all in on Thorne’s open assassination style of command. Elsewhere, you have Davos and like three other dudes and a direwolf holed up with Jon Snow’s body, ready to fight to the damn death to defend it. Luckily, Jon’s buddy Dolorous Edd is on his way back to Castle Black with a whole army of Wildings and possibly a couple of giants. Meanwhile, there’s a witch somewhere in the vicinity who, turns out, is older than everyone there combined.

THEN, away from Castle Black, the newly-minted Dream Team of Sansa, Theon, Brienne and Pod are headed to the Wall, completely unaware Jon is currently a corpse. Evil Goblin Ramsay Bolton knows where they’re going, and has an evil goblin plan. “Castle Black isn’t defended on the southern side,” he says in the preview, “We could storm the castle.”

And, oh yeah, there’s a giant army of ice-zombies leisurely death-strolling that way, as well.

So where are we headed? Toward a damn Westerosi cluster-fuck the likes of which we’ve never seen. Toward the biggest battle in TV history. Toward the grandest set piece Game of Thrones has ever done, with the chance Jon Snow rises from the damn dead in the middle of it wielding a magical-ass sword.

But haha meanwhile in King’s Landing some people are mad about a chair. Speaking of…

How soiled is this King’s Guard soldier’s armor right now?

Very. The answer is very soiled. Is it wrong that without speaking a word Robert Strong is my favorite character on Game of Thrones? I’m more hyped from that hulking tin can of undead meat slowly approaching a hallway than I am from anything that’s ever happened in Dorne.

Speaking of Dorne! (Kind of!)

Is Tyrion about to get roasted?

Thanks to previews, there’s a ton of speculation that Tyrion Lannister is about to get lit up like a dwarf star by one of the two remaining dragons underneath Meereen. A lot of this speculation revolves around the idea that Tyrion is simply taking the place of the Song of Ice and Fire novel’s Quentyn Martell. Quentyn, poor, stupid Quentyn, travels to Dany’s court–as part of a complex, decades-long plan by Doran Martell–to ask Daenerys’ hand in marriage. This goes…terribly, for a number of reasons, not the least of which is Quentyn ends up as Dornish charcoal.

But hey, funny story, last week’s premiere pretty much stabbed the entire Dornish plot in the face as quickly as possible, and Doran Martell is dead. Is Tyrion next? Probably not. I mean, come on. Dude will probably talk Viserion into a friendly game of Cyvasse.

Besides, Tyrion has an army of mystical Greyjoy pirates to take on. Wow, this show got weird. 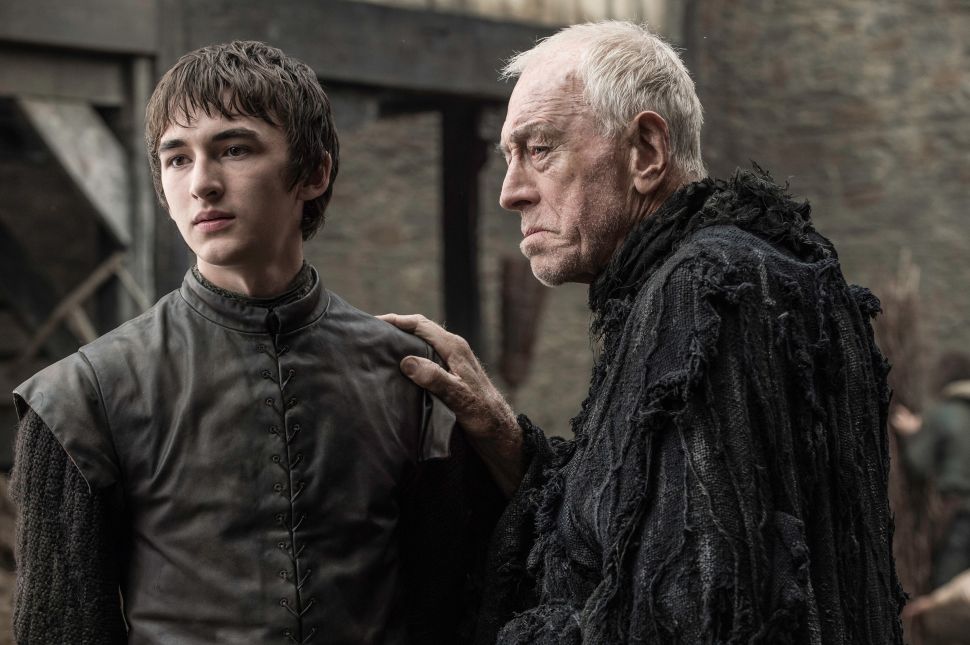