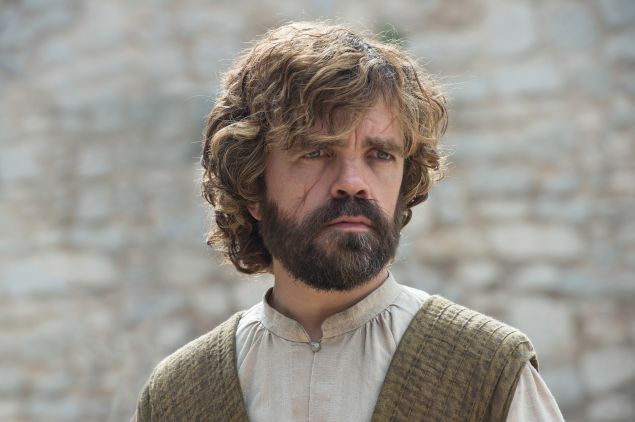 Peter Dinklage as Tyrion Lannister. Macall B. Polay/courtesy of HBO

(Spoilers for HBO’s Game of Thrones and the Song of Ice and Fire novels to follow. Complainers will be subject to trial by combat. This guy will fight for me)

If we, the huddled masses awaiting new episodes of Game of Thrones, were members of the Night’s Watch today we would have reached the very top of the Wall. We could see for miles, far out into the North and there, approaching like a horde of zombie-snowmen riding spooky dead horses, there it would be: the sixth season premiere at last.

Also, we would have just murdered our 998th Lord Commander. But we’ll get to that.

Before Sunday’s premiere reaches the Wall dragging wooly mammoths and climbing boots along with it, we have to drop the proverbial giant scythe on it. I have questions. I’m sure you have questions. And if words are wind, love is poison, and time is groats (or something like that), let’s skip the foreplay and get to the obvious:

Is Jon Snow Alive or Dead? 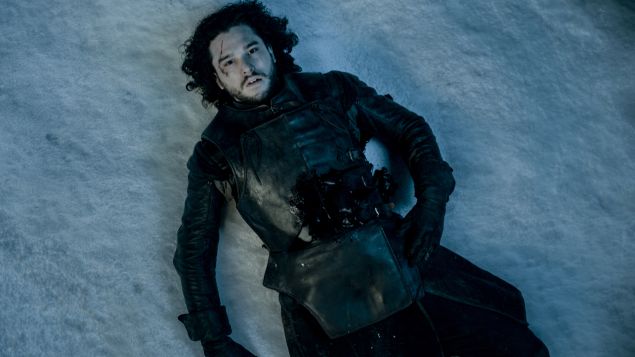 At this point in our culture, asking whether or not Jon Snow survived the Night’s Watch assassination is less a question and more a way of life. I could spend endless hours going into the Spider’s web that is the theories, queries, and crazy idea-ries surrounding the fate of Mr. Snow. This entire “Is Jon Snow Alive or Dead” section could devolve into a series of sub-question, which would then branch off into a series of sub-answers and THEN, because time is a flat circle, we’d find ourselves right back at the only ACTUAL evidence we have, that picture right up there, in which, yeah, Jon Snow looks pretty darn dead.

But, I need that time to craft dank GOT memes in preparation for the great recap-off that begins at roughly 10PM because HBO didn’t release preview episodes. Instead, I’ll just offer this: There is a very, very, very, very, very, very small chance Kit Harington is gone from Game of Thrones forever. I mean…come on. Do you really need more than that? Just…come on, HBO. Come on, Kit. We know your “JON SNOW is dead” campaign just means Melisandre is going to work some blood sugar sex magic and Jon TARGARYEN is going to rise and kick all kinds of frosty ass north of the wall.

Or, counterpoint, Jon Snow is just dead, which is a chaos ladder I don’t even want to think about climbing.

Is Myrcella Baratheon Alive or Dead? 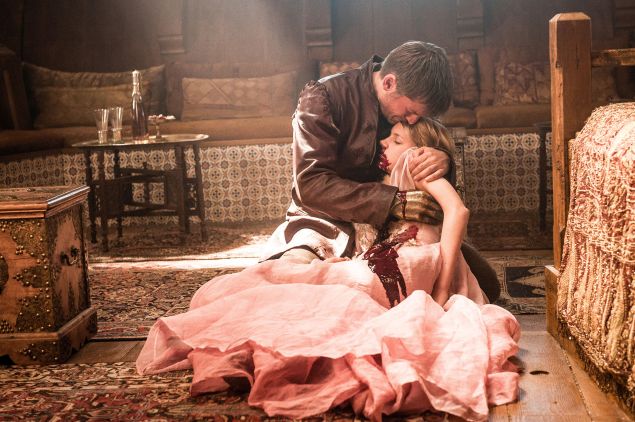 Haha I mean…probably dead? Maybe it’s just “bad pussy” hangover from Dorne, but is anyone really hanging on a thread to discover Myrcella’s fate? The little princess is like the Chyna to Jon Snow’s Prince (that was promised). Any other day, Myrcella, and your death would be such a bigger deal.

Although, trailers have shown Jaime arriving back home in Kings Landing, and the news of yet another dead child will probably lead to that sweet, furious Cersei vengeance that’s been missing from Thrones for a while. Which leads to…

Who Is This Giant Zombie Bastard? 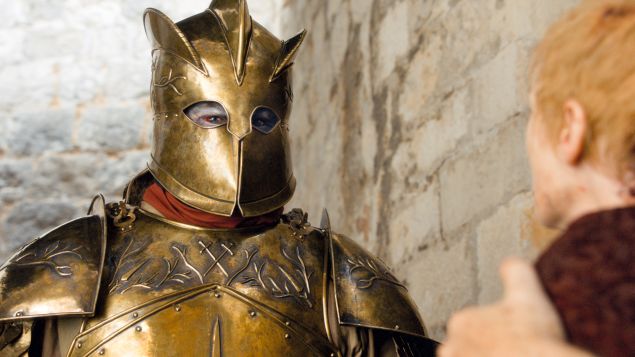 The possibilities–unlike death in Game of Thrones, apparently–are endless. For one, Cersei’s still on trial for, like, every offense imaginable by the High Sparrows. And should she choose a trial by combat, that 8-foot-tall undead slab of meat up there isn’t a terrible choice for a champion. Furthermore, rumors abound that opposite Robert Strong would be a reformed, not-dead-but-also-not-undead Sandor “The Hound” Clegane. If you hadn’t heard that theory, it’s okay. You were probably just distracted by all the tits and dragons.

Is Stannis Baratheon Alive or Dead? 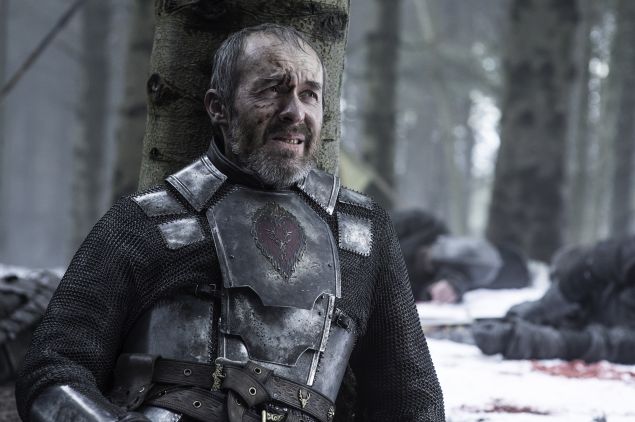 It would be a shame to see Stannis go. After four and a half seasons of primarily serving as King MumbleGrumble to much more charismatic characters, Mr. the Mannis really came into his own as an interesting king-candidate. And then, yeah, he lit his daughter on fire. Nobody’s perfect.

But the last we saw of Stannis, his army had been sufficiently Bolton’d in front of Winterfell, he was crawling through the forest wounded, and Brienne of Tarth was swinging a sword at his head. BUT, the camera cut away. Was the cutaway a little poetic justice, mirroring the way the camera didn’t show Shireen’s death, either? I don’t know. I feel like Game of Thrones, your worldwide leader in sword stabbing five years in a row, wouldn’t cut away from a major death two episodes in a row.

What Have You Gotten Yourself Into This Time, Daenerys? 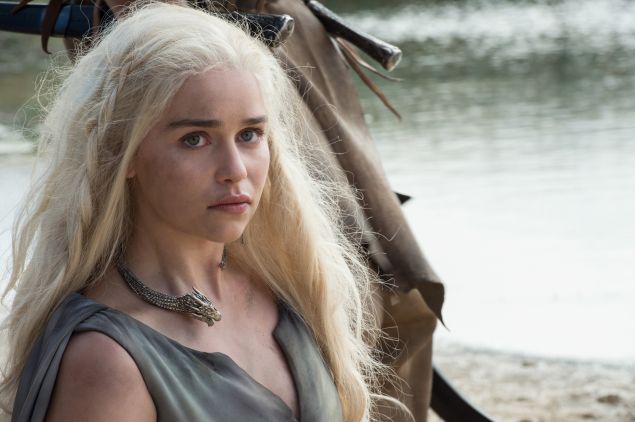 Emilia Clarke as Daenerys Targaryen. Macall B. Polay/courtesy of HBO

After Neverending Story-ing her way out of Meereen’s fighting pits atop Drogon, Dany finds herself surrounded by a massive Dothraki Khalasar. As season six previews have shown, the Dothraki are pretty much like “We don’t care that you were royalty. Khal Drogo is Aqua Man now. That’s like the lamest member of the Justice League. And wait, so Batman just kills people now?? Fucking Zack Snyder. That is so–” and on and on like that. (You know how the Dothraki love their Batman lore.) But the basic premise is that we’re headed to Vaes Dothrak, which is where Khaleesis go when they’ve outlived their Khals. By the look of it, the smell of roughly 10,000 horses is like, the most pleasant part of Vaes Dothrak.

Luckily, Dany has no shortage of wild cards. For one, Tyrion is still in Meereen and that dude could sell ice to an Eskimo. With him is Sir Greyscale, aka Jorah Mormont, who isn’t nearly as smart as Tyrion but would probably take on the entire Khalasar himself for the chance to graze Dany’s boob with his elbow.

Plus, you know, three giant dragons. Dragons against horses, you take the dragons.

Is Arya Stark Blind for Good? 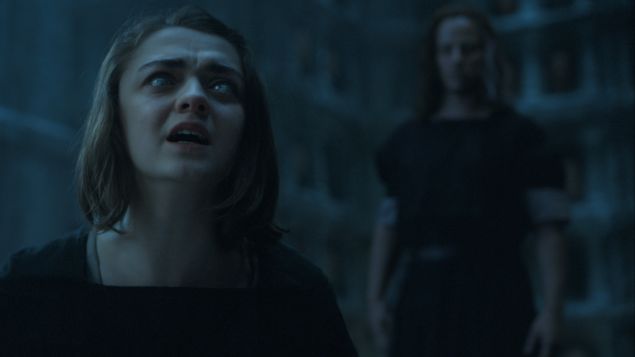 Last season Arya Stark went outside the House of Black and White’s s rule book to murder Ser Meryn Trant, and lost her eye site for her troubles. But is Arya Maester Aemon’d for life?

Not likely. The entire training process so far to become a Faceless Man has been one wacky fraternity hazing event after another. I mean, Arya got there by presenting a coin 20,000 miles away by boat, only for Jaqen H’ghar to meet her at the door disguised as an old black man like “Nope, you can’t come in.” Then a few days later he met her outside, revealed his true identity, and was like “Just kidding, you CAN come in.” Then he whacked her with a stick a whole bunch.

Basically, what I’m saying is that Jaqen and Co. are the types who seem with every development, they’ll show up a few scenes later to tell you it was all part of the training. Chances  are the blindness will help more than hurt in the long run because does Noone even have eye site? Yeah, didn’t think so.

Speaking of those wacky Stark daughters….

Why Has Noone Killed This Motherf*cker Yet? 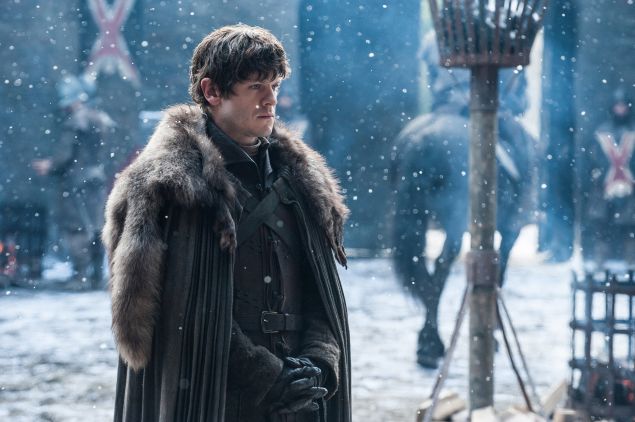 Things are…not so great around Winterfell. Outside the walls, Stannis is getting molly walloped by the Bolton army. Inside, Ramsay is about to be real, real pissed that his plaything Reek killed his dog-hunting soulmate Myranda and ran off with his bride, Sansa Stark. Plus, Roose Bolton is still lurking around somewhere, probably shying away from crosses, holy water, and sunlight.

Now, teasers and promotional photos have taught us that A) Theon and Sansa survived their leap from Winterfell’s walls and B) Sansa is totally, completely, 100 percent over everyone else’s bullshit. So, boil it all up, mash it, then stick it in a horrific rapey stew and you have some serious nonsense about to go down between the North and the Boltons. Serious enough, perhaps, to include TV’s biggest battle ever. The question then is, does the weather forecast for the battle call for SNOW?

Where is Rickon Stark? 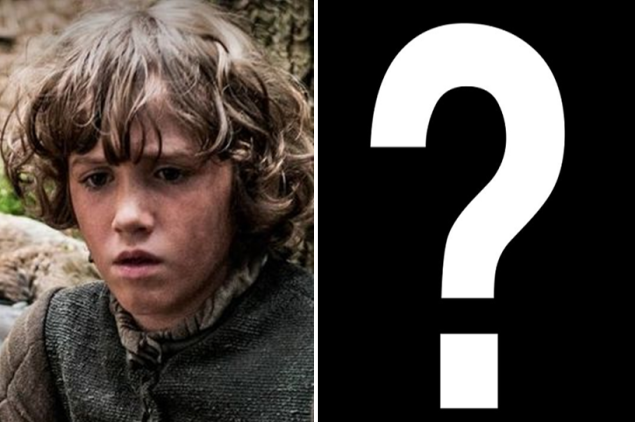 The last time we saw the littlest Stark was back in season three, when he and Osha split from Bran and Hodor to head for GreatJon Umber’s Last Hearth. If we’re going with Dance with Dragons‘ storyline, Rickon actually ends up on Skagos in the Bay of Seals, which is the worst Google Maps mistake possible. Skagos is, allegedly, home to both murderous cannibals and unicorns. Because this is Game of Thrones, the unicorns are most likely murderous as well.

So, obviously, Game of Thrones will end with Rickon leading an army of bloodthirsty cannibals into battle atop a unicorn. Just like George RR Martin always intended.

Can Bran Stark Walk and/or Fly Yet? 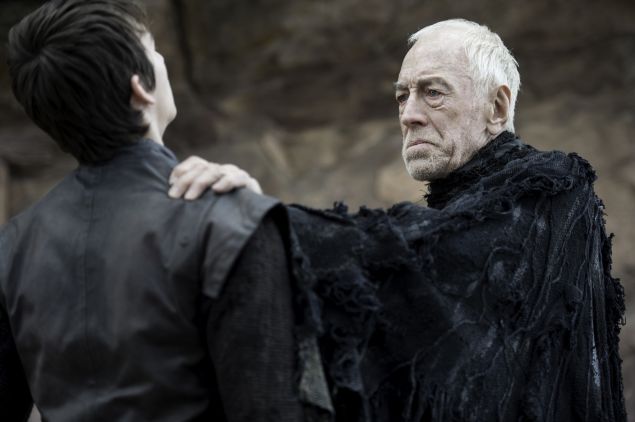 So many questions surround Bran Stark, who took season five off so that Hodor could tour his EDM concerts. In the interim, he’s been taking lessons from the Three-Eyed Raven, played this go-around by actor/total badass Max Von Sydow.

First things first: What’s with the footage of Bran bumping into the Night’s King, who we last saw at Hardhome absolutely demolishing Jon Snow’s hopes and dreams? Bran is standing, so this is most likely some of his mystical vision training. But what does that even mean? Besides some tree-hopping in Dance with Dragons, Bran’s time with the Three-Eyed Raven and Children of the Forest is about as far outside the books as possible. Plus, we still aren’t sure of the idea this training starts with Bran unknowingly eating his friend Jojen Reed. Jojen, unlike the books, died right before reaching the Three-Eyed Raven’s abode, a fact that would make Bran eating Jojen-paste only slightly less horrifying.

At the very least, if they survive the gargantuan, show-ending battle between White Walkers, dragons, Dothraki, mountain zombies, and unicorns, Bran and Rickon Stark will have some high-larious cannibal stories to swap. 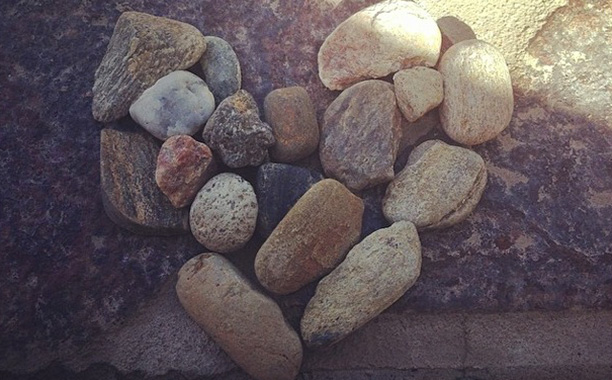 A pile of stones in the shape of a heart as Lady Stoneheart. Lena Headey

Has HBO’s Game of Thrones presented any evidence that, like in George RR Martin’s books, Catelyn Stark returns from the dead with the help of Lord Beric Dondarrion, calling herself Lady Stoneheart and embarking on a vengeful, murderous campaign to maim, murder, and destroy anyone and everyone involved with the Red Wedding? Well…no. But as Lady Stoneheart herself would say, “Akghuhhgak” because duh her throat is still cut from the time she was murdered. But what she means is, “Make it happen, Game of Thrones showrunners David Benioff and D.B. Weiss. That shit would be baller as hell.”

For the answers to these questions and MORE (probably), Game of Thrones’ sixth season premieres Sunday, April 24 on HBO. 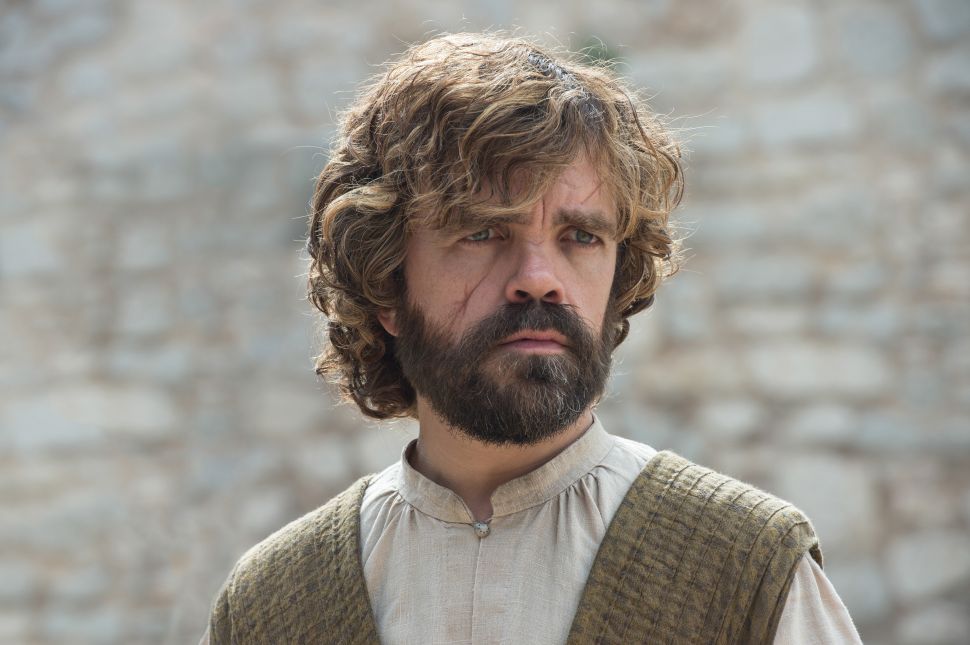