The first scene of this episode embodies Girls as a show. Hannah is trying to jog, but can only run in fits and starts. She’s determined to move forward, but is doing a pretty shitty job. Yet, at the same time, she is moving. Let’s hope everyone in the show can progress, in some small way, by the end of this season. Lord knows they need it.

Hannah runs by her house, and sees that her parents are sitting on her stoop. Turns out, they came to her place because she’s been ignoring all of their calls. They just want to spend time with Hannah, but she still refuses to accept that her gay father and straight mother have agreed to stay together. So, to avoid the situation entirely, she just keeps running.

Meanwhile, Marnie is in bed with Ray, telling him that it’s okay that she didn’t cum– apparently, she can only get off if she kind of hates someone. Well THAT explains a lot. Then, Marnie proposes that Ray go on tour with her and Desi. He could help her with all of her many, many emotional needs! Oh, and get her coconut and vitamins. Seriously, Marnie asked for that. She even says, “I know you don’t want to be without me.” If they weren’t in post-coital bliss, I seriously hope that Ray would have the sense to avoid this entire situation. But, since he just had his man bits touched by Marnie, Ray agrees.

At Ray’s coffee shop, Shosh is planning for an anti-hipster party. The manager, Hermie, is taking the idea a little too seriously, and decides that he’s going to treat every hipster like they’re “a hippy at Disneyland in ‘68.” Yes, I had to Google that reference, too. Sure, Colin Quinn is being an insane curmudgeon, but I still can’t help but love him. He makes some seriously great historical references.

Since Laird is still looking for his AWOL wife, Jessa is helping Adam with the baby. Yet she feels like she’s not getting enough credit for all the work she’s doing. For God’s sake, she watched two Youtube videos about kids. Two! That’s more prep than most parents do, right? Then, Jessa tells Adam that he should call Hannah for help, since she loves babies more than her. Of course, the mere mention of Hannah causes Adam to freak out, and the two are officially in a fight again.

Hannah agrees to hang out with her parents, on the condition that they both get better haircuts. Yet while they’re trying to talk to her, Hannah tells them to shut up. She’s preparing a spoken piece for The Moth Story Slam. (Shout out to The Moth!) So, Hannah’s mom insists that the two bond by doing what every parent and child do when they currently hate each other– they go shopping.

Well, turns out shopping works, because Hannah and her mom actually have a great conversation. Mama Horvath even tells Hannah that she hopes Jessa gets hit by a car– how sweet! Back at the house, Elijah comes in to take a shower, and runs into Papa Horvath. Elijah looks like a mess– he’s been partying for days in order to forget that a super hunky news anchor dumped his ass. Papa looks a little sad too– probably because he still has a wife… and is a gay man. In need of a father figure, Elijah puts his head on Tad’s chest and explains that he just wants to be happy, but can’t. He wants to give up. Yet Tad puts him in his place– he’s in his fifties, and he’s just starting. Elijah has so much life to live! He insists that things will get better.

Thank God, Laird is back so Adam can get a break from the baby. Jessa could not be happier– she’s smoking a cigarette before the kid is out the door. She suggests that they do something fun, but then brings up Hannah again. Clearly, Adam is d-o-n-e talking about her, but Jessa can’t stop. Then, she finally explains why she keeps mentioning Hannah. Jessa admits that feels guilty for stealing her best friend’s boyfriend. So, a part of her will hate Adam for the rest of her life, because he changed her morality. Since the two are adults, they decide to have a rational conversation about their feelings. Just kidding, they both start smashing things on the floor.

Meanwhile, on the tour, Desi is getting a ton of attention from teen fangirls. That makes sense– he is a hunky dreamboat, looks wise. But where is his girlfriend? As it turns out, she won’t be going on the tour. Yet that’s okay, because somehow, everyone else is getting along. Ray and Desi haven’t even said anything mean to each other! Looks like they can be mature, after all.

Unlike Jessa and Adam, who are fully destroying his apartment. This is one of the best acted scenes in the entire show. The rage coming from Adam is absolutely terrifying. He simply can’t believe that Jessa still wants to be friends with Hannah after all this time. Then, when Jessa runs into the bathroom, he punches a hole straight through the door. Jesus! This seems to be the turning point, and the two switch from screaming and throwing stuff to whispering nasty insults right to each other’s faces. At least no one’s getting physically hurt.

At Housing Works Bookstore–another shout out!– Hannah is hoping that her name will be picked out of the hat to read at The Moth Story Slam. Of course, the event is hosted by my favorite NPR woman and lady crush, Ophira Eisenberg. After she calls up a slew of different storytellers, Hannah is finally called. She’s about to bring her notes onstage, but someone tells her that they’ll get her disqualified. Come on, Hannah, don’t you know The Moth rules?

It’s clear that Hannah’s nervous, but she gets up there anyways. What follows is a moving moment, one that makes it clear that Hannah does have amazing storytelling abilities. She can get in touch with her emotions. Hannah stands in front of that audience, and tells them the story of how her best friend fucked her ex-boyfriend, and how she’s still dealing with that fact. By the end of the story, she tells us that she delivered a fruit basket to Adam’s house to wish him and Jessa the best. Then, she overheard their epic fight, and didn’t feel compelled to get involved in the drama. How very zen, Hannah. Perhaps she is progressing after all!

Shosh is doing better, too. Hermie, the coffee shop manager, is so happy with how well the store is doing that he slow dances with her while they close up. Yes, the curmudgeonly man is dancing now! It’s adorable.

Just kidding! Because Hannah’s dad is finally getting his gay on again! Hooray! Yet, at the same time, Mama Horvath and Elijah are drinking sadly from paper bags. Mama is worried that she’s going to die without doing anything important. Elijah is worried because he has no idea how he’s going to fill the rest of his life. Yet, the two still enjoy each other’s company, and they laugh together. There’s hope for them yet.

Jessa and Adam are a different story. They’re literally surrounded by the debris of their fight… and they’re completely naked. If there’s one trend throughout this show, it’s that these characters end up loving people who drive them insane, and usually don’t make them better people. Yet for some reason, they end up staying with them, anyways.

We end on Hannah, our leading lady, walking slowly down the street. Yet soon she picks up the pace, and breaks into a jog. A smile crosses her face as she thinks about what she just accomplished. She told a story to an audience and rediscovered her love of writing– that’s no small feat! As she runs into a freeze frame, all I can think is that things will get better for her. And I hope that they get better for everyone else, as well. Shosh, Marnie, and Hannah seem like they’re on the right path. But Adam and Jessa? I’m not so sure. Maybe Hannah’s fruit basket will help. 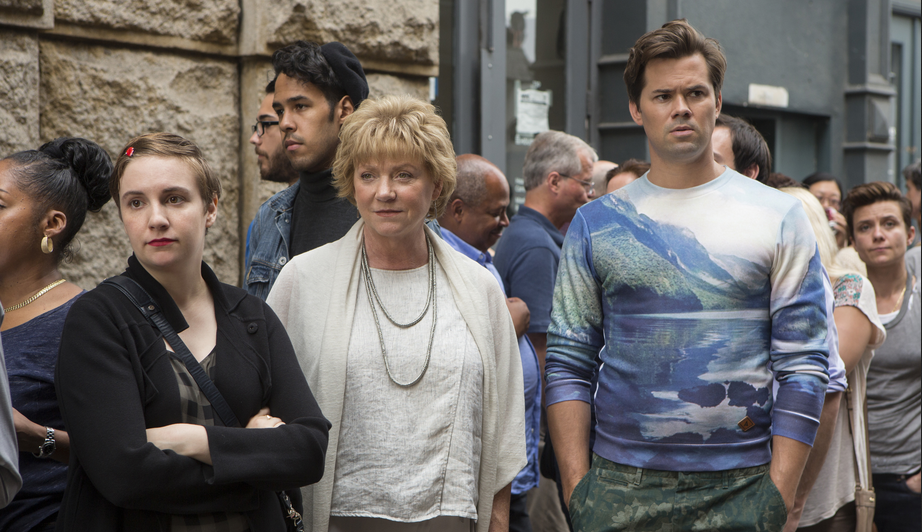