As a twenty-something who writes about the medium for a living(ish), there are very few things on television that can leave me speechless. I pride myself on being able to formulate thoughtful, borderline cohesive opinions on anything you put to my eyeballs from Game of Thrones to the Canadian Shark Tank. (It’s called Dragon’s Den, you uncultured swine.) Last night’s episode of HBO’s Girls left me borderline speechless.

The central point of the episode is the breakup of Hannah and Fran, who is probably the most interesting romantic partner the show has ever cooked up. Classically good-looking, logical, patient, and communicative, Fran is the anti-Adam; while also being the absolute f#$&ing worst. Most of the season has consisted of people telling Hannah what a good guy she has stumbled into and her frustration has grown alongside viewers as we too were privy to Fran’s judgmental, condescending, and privately controlling side. If you thought Adam’s affectionate nickname of “Kid” for Hannah was infantilizing, Fran’s “Buddy” is downright rage-inducing. Fran is a familiar sort of twenty-something guy — a throbbing dick who avoids said classification by being a superficial nice guy and having an “aww” profession that involves working with children.  We’ve all met them.

Unable to commit to three months of this in an RV, a pajamaed Hannah resorts to ending the relationship via text from a rest-stop bathroom. If you’re marginally on her side then, the subsequent chase through interlocking restrooms and into the woods, and self-stranding as she refuses to be driven back to New York may give you pause. There’s something jarring about seeing a 26-year-old teacher act like a dramatic tween and five seasons in, the show may have outgrown these fancier flights for Hannah who now just comes off as stunted. After running out of options, she summons Ray and in an attempt to service him as he drives, causes them to topple by the side of the road. It’s the sort of living-for-the-story flight of fancy that Girls is known — and sometimes unfairly derided — for and Hannah embracing everything that, by her own assessment, makes her wild and fun, now that she is finally free of the Ziploc-ed ham sandwich of a man that was Fran. But it also feels two seasons late.

From dealing with her father’s coming out to her provocative behavior at work, seemingly hoping to get fired out of the doldrum, Hannah’s immaturity had matured to something more measured and interesting than this all season.

“I don’t want to be in this relationship anymore and I don’t know how to get out!” screams Hannah, running away from Fran through a Men’s restroom. Somewhere between stating your character’s motivation out loud and doing it to Benny Hill footage, this strand of the episode felt like a parody of Girls written by someone who doesn’t particularly like Hannah or what the character represents. Really, you half-expected Blerta to hang up on her as she parsed through her contacts for a ride back to the city.

Speaking of awkwardly stating your narrative, Adam and Jessa hit their first skid as she overreacts to a baby’s spit up.  “You’re an adult. She’s a baby. Why do you need more help than a baby?” He tells her bluntly. Good line. But it makes no sense delivered to Jessa — the same Jessa that worked at a baby clothes store and had no problem dropping her head into the tub when said baby was crowning into existence last season. Say what you will about Jessa, but “squeamish and girly” is not one of her flaws. An interesting take on that scene is that it is Jessa unconsciously attempting to be more like Hannah to gain Adam’s attention but even that rings false. (Incidentally, postpartum depression and child abandonment make for an awkward, “breezy” C-plot.)

Are these characters or Characters! Complete with exclamation point and jazz hands? Or, are they only supposed to be vehicles for commentary about the amorphously stunted generation they are meant to represent?

Are these characters or Characters! Complete with exclamation point and jazz hands? Or, are they only supposed to be vehicles for commentary about the amorphously stunted generation they are meant to represent? ‘Homeward Bound’ loses the thread.

Still, the episode does get some things right. Ray and Hannah’s lack of sexual chemistry is right on the money for the sibling-like pair as is Marnie’s gleeful joy at being involved in a rehearsed “safety call.” But while humanity at large should rejoice at every appearance by the Beyonce upgrade that is Lisa Bonet (guest star #1), can we un-Desi yet? I want less Desi. I am ready for less Desi. Why can’t that troubadour troubade elsewhere now that he is no longer Marnie’s husband? Creative partners, yeah, I get it, but why are we still following his romantic inner life after a perfect bottle episode signaling to his removal from the premises?

Bonet herself  is just another in the string of increasingly consistent and recognizable guest stars and it’s beginning to near the overkill. Remember Gossip Girl, when impossibly wealthy teenagers would stumble into Ivanka Trump at a party because, why not? It seems to be an issue with any show set in New York City as, eventually, everyone wants in.

Including Guillermo Diaz, guest star #2, the most Girls-appropriate and underserved of the three guests of the night. The idea that seeing New York through the eyes of someone completely different from herself — that may or may not be a dangerous killer — reminds Hannah of who she was as a writer trying to make it is a great one and given far too little consideration in the five or so minutes of screentime the two share in an overstuffed episode. That plot alone could have easily been its own bottle episode.

(Sidebar: nothing about what we’re given in the episode contradicts the theory that this strange man, “Hector,” is in fact Huck from Scandal looking for a fresh start in New York City with a fresh tattoo. In fact, eff it: that was Huck. This was an under-advertised Scandal/Girls crossover. The deal was brokered between HBO and ABC transferring creative license to Dunham for the space of this one episode.) (Editor’s note: called it!)

Elsewhere, Shoshanna is back in America! Yay? Boo? She seems to oscillate between someone who truly loved Japan to someone who hated Japan every episode and at this point, it is becoming hard to care. Like guest star #3 Jason Ritter says, at the end of the day, it’s still a privileged girl eating sushi in crazy outfits bemoaning rather or not she even likes sushi.

Ben Philippe is a TV and Culture Writer based in New York. His writing appears on the A.V. Club, Gawker, Playboy, BuzzFeed, and others. Yes, he knows more Gilmore Girls trivia than you; it’s petty to hate him for it. You can find him on Twitter @GoHomeBen 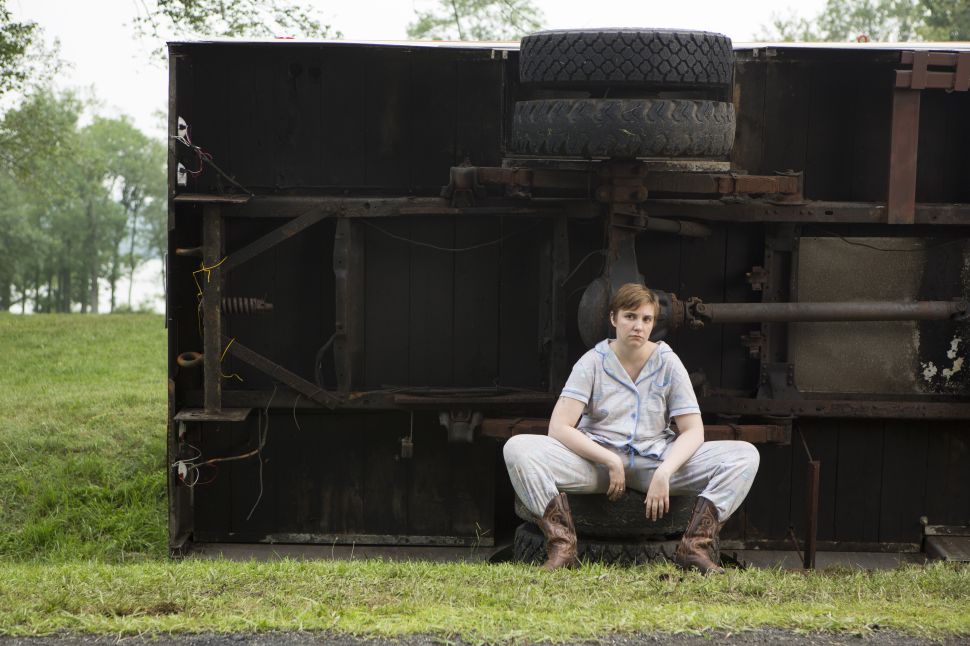