My apologies for the lateness of this week’s Reference Guide. There’s really not a great reason. I’ve just been listening to thrash metal and staring at this picture for 48 hours straight.

There’s just so many layers to this photo. Look at how cold Peabody is. Why’d she even have to come? She didn’t say anything. She didn’t say one word. Also, why is the only way Gotham can convey a character’s mourning is to have them listen to speed metal in their room alone? Bah, you know what? Keep putting Hugo Strange in big, fluffy coats and you never have to explain anything to again. Never kill this character, Gotham. Never rob B.D. Wong’s performance of a mad scientist from my life. Kill everyone else, honestly, whatever. Bane-nuke the entire Gotham landscape until nothing is left but B.D. Wong sporting mauve-tinted glasses and an immaculately trimmed chin strap and I’d literally mail you envelopes of money.

But…I digress. This week’s episode, “Pinewood,” decided to go ham-sandwich with its amount of references, so let’s keep this part short. Real quick, though, let me explain why Gotham just became one of the most interesting things on television.

In the comic books, there is no storyline where Hugo Strange ordered Thomas and Martha Wayne murdered. Jim Gordon has never teamed up with a post-murder pre-puberty Bruce Wayne to discover this information with the aid of Alfred Pennyworth and Lucius Fox. There’s no Pinewood Farm. There’s no Project Chimera. To the best of my knowledge–and please, if I’m incorrect here, @ me as violently and angrily as humanly possible–not once has Jim Gordon used a pair of nunchucks outside the fanfic corner of the internet. And even then, he didn’t use them like he did in “Pinewood.”

What I’m getting at here is that for all its gleeful weirdness, odd charm, and occasionally tremendous TV Gotham has never felt like its own thing. It’s always seemed like a bunch of other separate little things parsed from DC Comics history all rolled into a weird patchwork quilt with little bat ears at the top. It was like those Batman imposters from The Dark Knight; sure they technically had everything they need to be Batman, but they’re still going to get horribly mauled by a pack of rottweilers.

With “Pinewood,” Gotham took off its hockey pads. Balls are rolling. We’re no longer stuck in a straight origin story. We’re riding momentum into just…a story. And yes, maybe we could gripe all day about how a series shouldn’t take nearly two whole seasons to find its thesis. Fair points, all. But for everyone who stuck through Hair-Crow, the Faux-Ker, and Selina Kyle ending every sentence with “Oh, also, I like milk. Like a cat would,” they’re now getting more than just parts of a . We’re getting an actual, original Dark Knight story, week after week.

None of this is to say “Pinewood” didn’t have its moments written by an actual orangutan locked in a room with Frank Miller’s Batman run and no basic knowledge of how story works. Case in point: Jim’s plan to rescue Karen Jennings that was so cartoonish, I’m shocked no one was crushed by a falling anvil. I assume the scene where Jim tells Alfred “We paint the railroad tunnel on the wall, but it’s not ACTUALLY a tunnel!” was cut for time.

Furthermore…why did no one shoot Victor Fries in the head? Actually, wait, why doesn’t Victor Fries’ new costume have a helmet on it? Are we to assume this costume doesn’t protect his subzero skin, but more, like, lightly cool it? Like one of those mist fans they have at amusement parks but, the opposite? Sigh. Whatever, Gotham. At least this new costume confirmed both Fries’ descent into villainy AND the fact he’s seen the Toy Story trilogy. Those new digs were way less Buzz Lightyear and far more Emperor Zurg.

As always, let’s run down every reference, fact, and nugget of Bat-history brought up in the season 2, episode 18, “Pinewood.”

Pinewood Farm, the shack in the woods where Karen Jennings hides her turkey hand from the world, shares a name with British film lot Pinewood Studios, where Tim Burton built Gotham City for 1989’s Batman. As you can see above, the set stood for a while after filming as a haunting monument to a time long-passed, before Tim Burton realized he could just attach Johnny Depp to some strings and a green screen.

If I could marry a still-frame from a TV show, I’d…well I’d marry the picture of Strange in the puffy coat from the beginning of the recap, but I’d have so many affairs with this ridiculous Gotham City Cricket Team photo. There’s just so much to discuss. Mainly: look at that smug motherf*cker right in front. How did Thomas Wayne NOT know Hugo Strange was going to have him murdered based solely on this photo? Look at those villainous-ass khakis.

Can we also address how Luscious says this photo lists nicknames and Hugo Strange is the only one with a nickname? I don’t even think that’s a mistake. That’s how the Philosopher rolls.

The rest of the name, although blurry, range from mildly interesting to iconic. You have Thomas Wayne, of course, but also Andrew Weininger, who appropriately works in Gotham‘s art department. Also Paul Weathered and Travis Quegan, who also work in art departments of…not Gotham…Kyle Davis who according to Rotten Tomatoes is a pretty consistent actor who isalso  blind in one eye which to be honest wouldn’t help the cricket team all that much. And then, finally, next to Thomas Wayne is “Grant Gardner.” For anyone here under the age of “what is the internet, where am I?” Grant Gardner is the alter-ego of Marvel’s Captain America in the 1944 Republic serial, Captain America. Grant Gardner’s Civil War was the actual American Civil War.

So, first of all, nailed it. But yeah, we’ve been over Azraels before. Quick recap: an off-shoot of a religious off-shoot made up of warrior-monks called the Sacred Order of Saint Dumas started training superpowered champions called Azraels. They’re sworn to “enforce God’s will,” which spoilers means kill people. An Azrael named Jean-Paul Valley tried to take the mantle of Batman after Bane broke Bruce Wayne’s back, which didn’t work out in the end because spoilers he killed too many people.

But yeah, Patient 44 aka Theo Galavan aka James Freaky-face Frain is back and he’s either A) An Azrael himself or B) Just screaming the first word that popped into his head after literally returning from the dead. 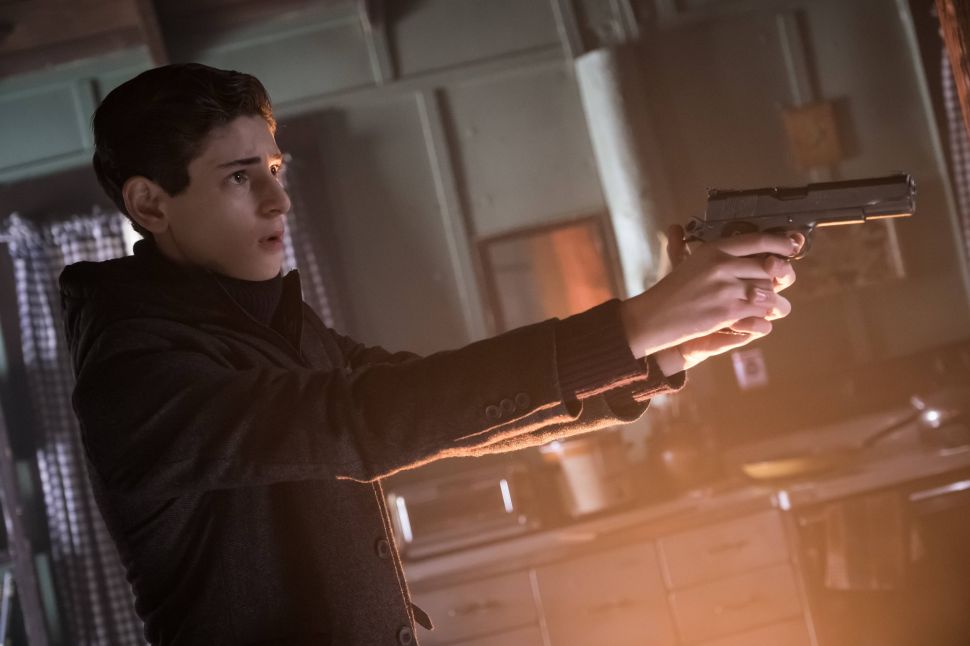