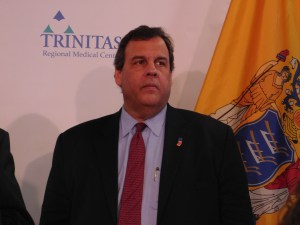 order to emphasize distance and convenient opposition – slam the governor on an insolvent state Transportation Trust Fund, Christie barked back at his would-be tormentors.

In the process, Christie slapped at Speaker Vincent Prieto (D-32) and the legislative leader’s inability to summon a majority.

“They’ve worked very hard to get a majority,” said the governor.

All they’ve proposed is a gas tax.

So get a bill on the gas tax, the governor said. Get a bill and “get 41 votes for it in the assembly.”

“Then they’ll give me something to think about,” said Christie. “It must represent tax fairness. Let’s see if he can get 41 votes. What they don’t understand – [Budget Chairman Gary] Schaer and [Assemblyman Troy] Singleton is it’s not incumbent on the executive branch. What’s your solution? Show some leadership.”

A reporter tried to nudge Christie into going ballistic on Atlantic City Mayor Don Guardian, but Christie – confessing delight at being in Cranford, the town where he and his wife purchased their first home – stayed relatively subdued.

“I’m the governor of New Jersey, he’s the mayor of Atlantic City, and he’s out of money today,” the governor said. “He’s broke.”

Having dismissed Guardian, Christie gazed upward in acknowledged honor at news that President Barack Obama will be the commencement speaker at Rutgers University next month. Christie said he talked to the president yesterday and was pleased that his old frienemy saw fit to put a New Jersey event on the schedule in his last year in office.