Guggenheim breaks off negotiations with labor protestors. Members of the activist group G.U.L.F. staged high profile protests inside the museum’s New York location in 2014 and 2015 to call attention to human rights violations that have occurred during construction of the Guggenheim Abu Dhabi. Now, the group has announced they will resume demonstrations because the museum has cut off negotiations with G.U.L.F. officials.

James Franco defends his art to critic Jerry Saltz. The much maligned actor/writer/artist tells New York Magazine art critic Jerry Saltz why he should be taken seriously by the art world. “It’s the freedom of making something that doesn’t need to entertain, that isn’t going to be tallied up in the box-office tolls. And it’s something that, frankly, I’ve done longer than I’ve been making films,” said Mr. Franco.

Pyscho-inspired house rises on the roof of the Met Museum. British artist Cornelia Parker has constructed a nearly life-sized house inspired by the looming mansion from Hitchcock’s 1960 film Psycho and the paintings of Edward Hopper. Transitional Object: (PsychoBarn) is the latest work in the Met’s roof garden commission series, which invites artists to take over its most popular outdoor space.

First ever street art fair to open in Paris. The Urban Art Fair will open for three days starting on April 22 and feature art by recognizable stars such as Banksy and Nick Walker.

The right way to buy indigenous Australian art explained. The Guardian’s Brigid Delaney gives tips for how to ethically buy work from indigenous artists without exploiting the Aboriginal community.

London Museum surveys the history of underwear. “Undressed: A Brief History of Underwear” at the Victoria & Albert Museum explores the links between popular fashions and underwear trends from the past 300 years. The show features 200 examples of lingerie, corsets, petticoats and jockstraps. 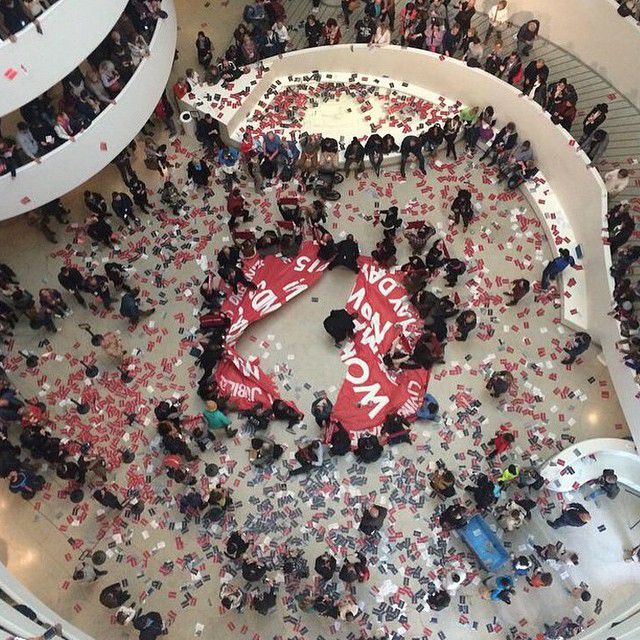