A 30-year-old Russian punk rocker has cracked the code on Hollywood’s constipated efforts to cross-pollinate gamer culture with big-screen spectacle. His secret: an intrepid parkour-happy stuntman-turned-cameraman and a slew of body-mounted GoPro cameras.

Ilya Naishuller’s Hardcore Henry, a head-spinning, whirling dervish of an action movie, had rabid fanboys clawing up their seats at midnight screenings last fall during the Toronto Film Festival and Austin viewers packing houses during last month’s SXSW Film Festival. Is the fevered response valid? Absolutely, for those seeking a vicarious rollercoaster rush. Everyone else, take a healthy dose of Dramamine and hang on tight. Once the action starts, the bullets fly, the blood spurts and it takes some willpower to maintain bladder control.

This lollapalooza of ultraviolence is not for the faint of heart. The viewer awakes as an amnesiac with a cyborg’s body named Henry whose leg is being screwed into place by his wife, a blonde bombshell in a lab coat. But before she can activate Henry’s voice module and explain what’s going on, a mysterious albino villain appears with paramilitary goons to scramble their plans. From there, the chase begins: Henry’s parachuting onto highways, dodging flame-throwers, scrambling across narrow bridge trusses, marauding through a scarlet-bathed brothel, all while killing so, so, so many people.

It’s enthralling until it’s enervating. The moments where the mute Henry interacts with people will be deeply familiar to devotees of Call of Duty or Grand Theft Auto and absolutely eye-rolling to generic moviegoers: think those classic cut scenes in video games that clumsily provide story-advancing exposition and act as breather moments in the otherwise relentlessly kinetic gameplay.

The saving grace in those moments is Sharlto Copley, a delightfully hammy actor who gets the plum assignment of playing a half dozen different variations of a guy named “Jimmy.” His character puts an inventive spin on the classic “live-die-repeat” avatar aesthetic that dates back to Pac-Man. It adds a nice B-movie touch to the proceedings.

Mr. Naishuller’s previous stab at filmmaking was the 2013 music video “Bad Motherfucker,” for his band Biting Elbows, which used that same first-person-shooter aesthetic with sci-fi-tinged tropes. His debut feature is a landmark of sorts, and a potent omen in this year of mass-marketed virtual reality (Facebook’s Oculus Rift is now available; Sony’s PlayStation VR hits stores this October). Sensory immersion awaits. Let’s hope movies can survive the shake-up. 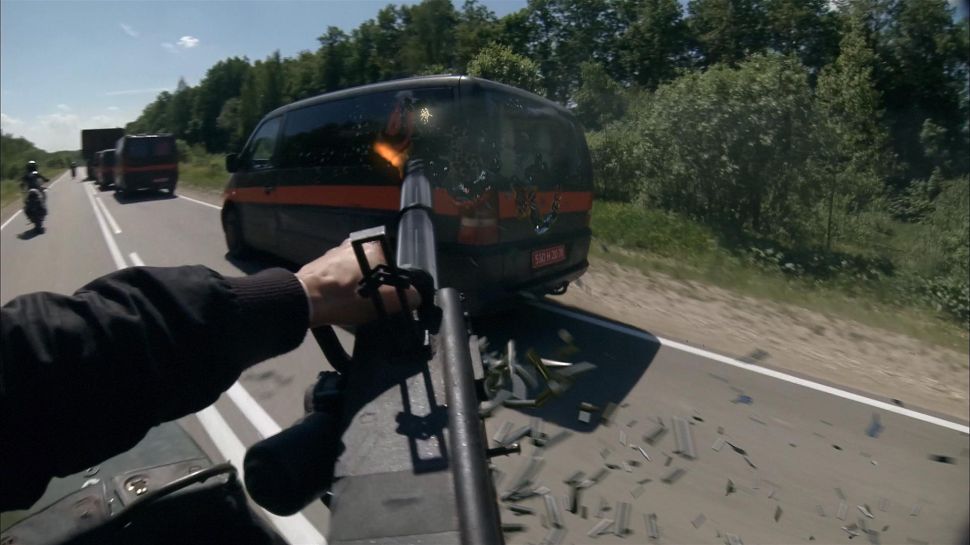