In a lurid, lumpy and lugubrious mess called The Adderall Diaries, misguided first-time director Pamela Romanowsky cleaves a pointless film out of a foggy memoir by writer Stephen Elliott (About Cherry) about a murder case he pursued with no resolution. Mr. Elliott’s story is not helped by James Franco, who plays him with his usual smug catatonia. He makes more movies that nobody wants to see than Ethan Hawke with the same dubious results. Don’t rush to see this one. It will be on VOD in just a few minutes.

As depicted, Mr. Elliott comes across as a lazy, irresponsible, motorcycle-riding dope addict with a bit of luck and a crackerjack agent (a wasted Cynthia Nixon). After publishing an autobiographical hatchet job about how his father’s abuse and neglect turned him into a junkie and a criminal, he suddenly gets a taste of celebrity with two book deals and a teaching gig at Columbia. Instead of doing the work, he becomes an “expert in the fields of masturbation, cheap vodka and bad decisions.” Instead of meeting deadlines, he gets hooked on television news reports about a software tycoon named Hans Reiser (Christian Slater), accused of the unsolved murder and disappearance of his wife and children. With no weapon, no bodies and no evidence, he goes to trial anyway, and Elliott smells a bestseller. He visits the man in jail, proposes a book telling his side of the story and gets turned down flat.

Stricken with writer’s block and a growing dependency on an amphetamine called Adderall, he sinks into an abyss of drugs and body odor, much to his agent’s fear and dismay. Columbia wants to buy him out of his teaching contract. Random House is canceling his book deal. Lawsuits are threatened from every side. But all he has time for—or interest in—is snorting cocaine and popping pills, aided by a sexy reporter covering the murder trial for The New York Times (Amber Heard) who gleefully joins him in bed to experiment with asphyxiation, cigarette burn and assorted acts of self-mutilation. I don’t know how much of this unconvincing saga is true, but I’m sure Times editors will be fascinated to learn their reporters assigned to cover murder cases have so much free time on their hands to do everything except research and write the story.

Anyway, multiple subplots emerge as Elliott finds parallels between the trial of a man accused of killing children and his personal childhood nightmares of parental abuse by his own cruel and distant father (Ed Harris). Then his missing father shows up with a story of his own to tell, and fact battles fiction as the film grows more confusing. James Franco is such a zombie that his passionless performance robs an otherwise complex character of any hope for viewer involvement, while the perplexity moves toward an unsatisfactory climax with the pace of a tuneless hum. It’s yet another annoying example of style (dark rooms, close-ups of agonized expressions meant to depict writer’s block, slick sex montages) over substance (fitting an old crime into a new one). None of the elements add up to a cohesive whole, and when Franco compares his predicament to Truman Capote and Norman Mailer, who rose from the ashes of writer’s block to create masterpieces, you have to suppress the urge to laugh. Questions of fathers and sons, how to tell the truth and the way each man chooses to write his own story for posterity are scuttled in a surfeit of bathos. The ideas dim in a sombrous fog of amphetamine-induced vagueness, and so does the movie. 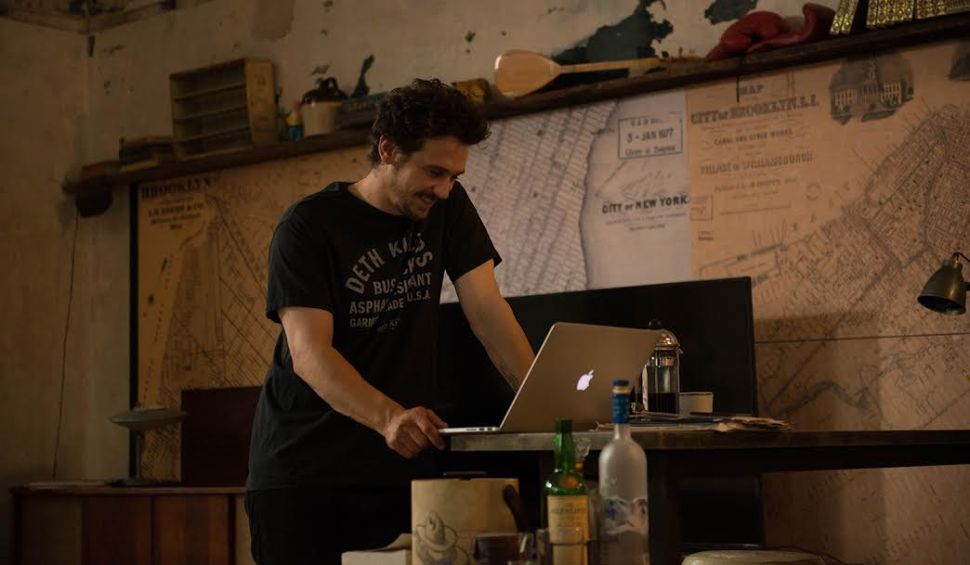