Hillary Clinton told a Staten Island crowd today that she was the candidate who could reach across party lines to get things done as president—pointing to her experience representing the borough in the Senate and even giving public thanks to Republican President George W. Bush.

“I have no time for people who are partisan for the sake of being partisan,” Ms. Clinton, a Democrat and former secretary of state, told a crowd that welcomed her enthusiastically in a historic building at Snug Harbor Cultural Center.

Ms. Clinton was the second leading presidential candidate to speak on Staten Island today, after Republican Donald Trump delivered a typical stump speech at a Republican brunch. But Ms. Clinton, perhaps sensing or recalling Staten Island’s ever-present desire for politicians to pay attention to the forgotten borough, delivered a speech that seemed to be especially tailored for the borough, which is more conservative than the rest of New York City. The majority of its voters are registered Democrats, but the borough routinely swings Republican.

Instead, Ms. Clinton decried “deliberate efforts to set Americans against each other.” She harkened back to representing the borough of cops and firefighters on September 11, 20001, when nearly 300 Staten Islanders were killed in the terror attacks. She noted the city’s mayor, the state’s governor, and the president were all Republicans.

“I did not for one minute stop and say to myself: ‘Well, I don’t know, can we work together?'” Ms. Clinton said. “How absurd is that?”

Ms. Clinton said with 3,000 people murdered, people “pulled together” and “politics was totally left behind.” She had criticized President Bush for his handling of a strong economy he “inherited” from her husband, President Bill Clinton, and for other reasons. But she praised him for approving billions of dollars to rebuild lower Manhattan after the terror attacks, even as others in Washington didn’t want to spend it.

“I publicly say, ‘Thank you President George W. Bush,’ for making sure that we got the money that we needed to rebuild our city,” Ms. Clinton said.

She also touted her record working for the borough after the attacks, including sounding the alarm on air quality and pushing for the passage of the Zadroga Act. Ms. Clinton went on to discuss her foreign policy experience, saying anyone who wants to president has to be able to offer specifics on what they would do—an allusion to her Democratic rival Vermont Sen. Bernie Sanders—but also has to be able to keep people safe.

“Maybe we take that more seriously here in New York, but we should,” she said. “And we are going to do everything we can to keep America safe.”

She cited her work building a coalition that “brought Iran to the negotiating table,” without mentioning how controversial that final Iran deal was for President Barack Obama.

Ms. Clinton’s rally had little in common with Mr. Trump’s Staten Island event, except one thing: the crowd at both seemed to hate Republican Texas Sen. Ted Cruz. Ms. Clinton mentioned his plan to spy on Muslim neighborhoods, which has also been dismissed by Police Commissioner Bill Bratton.

At the mention of Mr. Cruz’s name, the crowd offered a chorus of boos.

The crowd had been hyped up for Ms. Clinton before she even arrived, and gave a nice response to several local pols as they urged people to get out the vote on Tuesday.

“Hillary is the only one with the experience,” said Councilwoman Debi Rose, a Democrat who represents the borough’s North Shore. “She knows what it’s like to be in the White House. She knows the realities. She knows that living and running the White House in this country is not a reality show.”

Ms. Clinton, at the end of her speech, offered the kind of promise Staten Island always loves—and the kind it holds politicians to, if the way the Staten Island Advance repeatedly agitated and inquired about a town hall Mayor Bill de Blasio will finally hold here on Wednesday night is any indication.

“I want you to hold me accountable,” Ms. Clinton said. “I will be coming back to Staten Island when I am your president.” 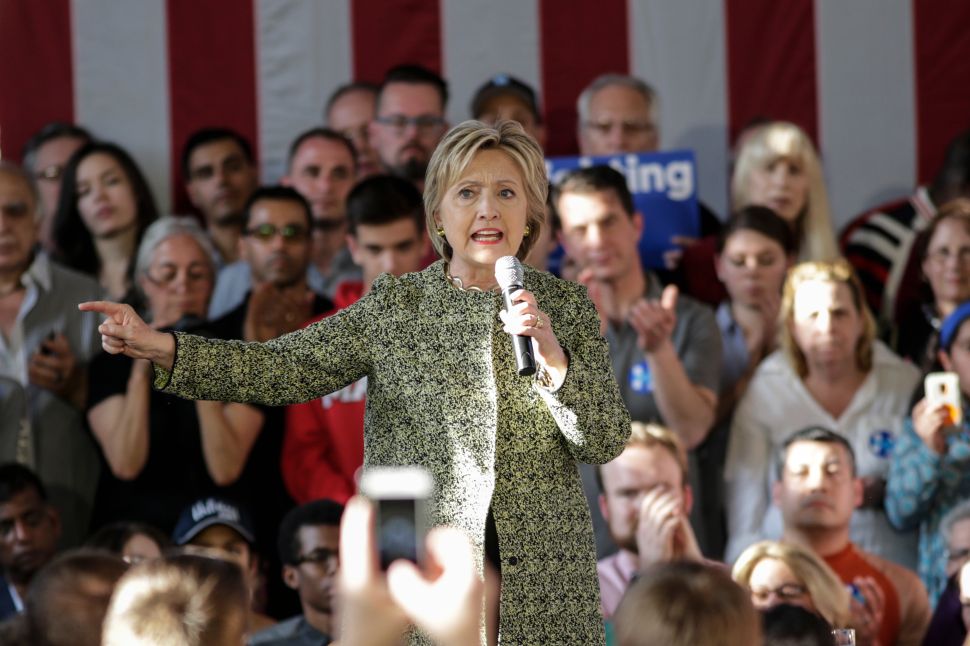