None can now deny that the refugee crisis that descended on Europe over the last year has changed the continent’s political landscape. The arrival of millions of migrants, mainly from the Middle East and Africa, with the encouragement of some European leaders, has birthed a political earthquake that promises to reshape Europe’s politics in important ways.

Even Europeans who initially supported the efforts of Angela Merkel, Germany’s chancellor and the most powerful politician in the European Union, to welcome millions of refugees have begun to express public doubts about this enterprise. This week, Austria’s foreign minister, whose country only months ago was welcoming tens of thousands of migrants, expressed Vienna’s position concisely: “The concept of no borders is not going to work.”

This statement has profound implications for an EU that has already begun to recreate national border checks, which disappeared in most of the European Union with the birth of the Schengen Area two decades ago. In order to stem the burgeoning migrant tide, border security is reemerging inside the EU. The prospect of millions more migrants attempting to enter the EU through the Balkans this spring fills politicians and security officials all over Europe with dread.

Meanwhile, Europeans who were skeptical of Ms. Merkel’s opening the floodgates to millions of migrants are indulging in told-you-so’s on a grand scale. Major political controversy has followed, abetted by migrant crime and the reality that absorbing large numbers of newcomers—many of them unskilled and illiterate even in their own languages—will be much more time-consuming and costly than European publics were told just last year.

To say nothing of the reality that most of the migrants are Muslims, whose values mesh poorly with the largely secular, postmodern EU, while some of them are convinced radicals. In the aftermath of jihadist terrorist atrocities like last November’s Paris attacks and the slaughter in Brussels last month, many Europeans feel that letting in even one more terrorist is one too many. Average citizens in EU countries care about security now, even if much of their political class has been slow to realize this.

Some politicos are making the most of this new threat, however, and few of them come from mainstream parties. In France, the far-right National Front (FN) is surging in polls thanks to its tough line on migrants and terrorism, while even in Germany, where the far-right has been politically beyond the pale since 1945, anti-immigrant parties are rising fast. Particularly important has been the breakthrough of the Alternative for Germany (AfD) in recent state-level elections. They can no longer be considered a fringe movement, and they are making a serious effort at stealing votes from the ruling center-right coalition in Berlin, many of whose voters are disgusted by Ms. Merkel’s permissive and expensive refugee policies.

Not content with the actual level of crime among migrants, Russian media outlets have taken to inventing more of it.

A new era of right-wing politics has emerged in much of the EU over the last year, carried on the back of the refugee crisis. Tendencies toward nationalism and xenophobia, building for years over frustrations with micromanagement by Brussels, have exploded in the open and seem unlikely to dissipate anytime soon. This means European politics will be focused on the significant cultural, economic and security impacts of the migrant wave for years to come.

Cui bono? is a key question that’s been asked by more than few Europe-watchers in recent months as migrants have helped shift EU politics decisively to the right. It’s difficult to avoid noticing that many of the far-right parties reaping the whirlwind now across the EU have positive views of Vladimir Putin’s Russia. The EU’s rising right admires the Kremlin for its unapologetic emphasis on traditional values, state sovereignty and zero tolerance for jihadism. Anti-immigrant rallies in Germany have featured protestors brandishing Russian flags prominently, as well as German ones.

This extends beyond mere sympathy. France’s FN has accepted millions of dollars in funding from the Kremlin, while Germany’s AfD seems to have benefitted from Russian largesse as well. It’s therefore not surprising that the leaders of those parties have warm, praising things to say about Mr. Putin and his regime, viewing Russia as a bulwark of conservatism and an ally against migrant invasion.

Secret Russian funding for Europe’s far-right isn’t entirely new (and it should be stated that Russian intelligence also provides clandestine support to certain left-wing parties in the EU too, a Cold War legacy) but it’s taken on real importance now that the FN and the AfD may finally have a shot at governing thanks to political ferment caused by the refugee crisis. Friends of Russia, only recently considered politically marginal, matter now in several EU states, including key ones like France and Germany.

The Kremlin has also been active with its customary propaganda games. State outlets like RT and Sputnik prominently feature stories on violent migrants to the EU, the more lurid the better. It’s in Moscow’s interest to stoke European fears, since scared citizens may vote for pro-Russian parties. Not content with the actual level of crime among migrants, which none can deny is a real problem now, Russian media outlets have taken to inventing more of it.

This is an old Kremlin trick, known as disinformation in the spy business, and to be successful it must at least be partly grounded in truth. A recent case illustrating the problem was the sordid saga of a thirteen-year-old girl in Berlin who was allegedly kidnapped and gang-raped by Arab migrants. The horrifying tale became a media sensation in January, allowing Moscow outlets to portray Germany as teeming with Muslim rape-gangs—but a tale it was. The crime never happened, but this did not stop the Russian foreign minister from publicly accusing Berlin of a “cover-up” while Russian TV ran fake video to embellish the fraudulent story.

A major concern is that the Kremlin has seeded the migrants with secret operatives who will be activated once they reach Europe.

This was all old hat to Western counterintelligence hands acquainted with Kremlin agitprop. The public was willing to believe a lie since migrant crime—including sexual assault—is hardly a figment of the imagination, while promoting the lurid story non-stop on the Internet and TV, creating a climate of hysteria, meant it took several days for authorities to establish there was no crime committed. By then, the political damage had been done, as Moscow intended.

The hand of Russian intelligence behind some European far-right politicians and sensationalist news stories can be detected by those with the skilled eyes to see it, but there have also been nagging questions about whether the Kremlin is stoking the migrant crisis itself. It’s undeniably true that Syria, a Russian client state, has been perfectly happy to export its huge refugee problem to Europe, while Mr. Putin’s military intervention in that bloody civil war last year has only increased the flows of desperate Syrian refugees seeking sanctuary in the West.

But does Russian intelligence play a more direct role in encouraging migrants to head for the EU? Several Western security services have hinted at this reality, but only recently have any European governments been willing to go on the record with their concerns. In mid-February, Finland’s defense minister bluntly stated that the flow of migrants into his country via Russia was “our most serious challenge.” Now, with refugees taking an Arctic route into the EU from Russia in unprecedented numbers, Helsinki is openly accusing the Kremlin and its intelligence services of flooding Finland, and therefore the EU, with refugees as a political weapon to destabilize Europe.

This notion, which may sound far-fetched to neophytes, is taken very seriously by leading EU and NATO members, particularly those unlucky enough to be located close to Russia. “This is all the FSB,” explained a senior security official from one of NATO’s border states, referring to Russia’s powerful Federal Security Service. “Migrants go where the FSB sends them, many of the human traffickers are FSB agents,” adding that for the Kremlin this is a “win-win since it gets the migrants out of their lap and drops them in ours.”

Western security services are also worried that the FSB and other Russian intelligence agencies are exploiting the refugee crisis for espionage purposes. A major concern is that the Kremlin has seeded the migrants with secret operatives who will be activated once they reach Europe. The use of deep cover spies, what the Russians term Illegals, was a specialty of the KGB that has continued to the present day, as revealed by the roll-up early last year of an Illegal of the Russian Foreign Intelligence Service, or SVR, who was operating in New York City, spying on Wall Street.

Illegals, who are an elite spy cadre, pose a particular problem for Western counterintelligence since, unlike most Russian spies abroad, they have no official “cover” job with, say, a Russian embassy or trade mission. Illegals who keep their nose clean and work hard at their cover story—their false identity they call their “legend”—can be nearly impossible for even competent Western security agencies to uncover.

Therefore news out of Poland this week raises troubling questions for NATO. As reported by the newsmagazine Wprost, Polish intelligence determined the Kremlin has seeded the vast ranks of migrants with Illegals who, once they reach the EU and get settled into their new lives, will serve as Russia’s secret eyes in Europe. Warsaw has “credible multi-source information” on this, including intelligence from U.S. and British spy partners, indicating that Russian intelligence services have sent Illegals to Syria, then on to Europe, posing as Middle East refugees. They are destined for several EU countries, including Germany, France and Britain. Possessing high-quality fake documents provided by the Kremlin, as well as proper espionage training, these Illegals will be nearly impossible to detect, even with careful security vetting.

Western counterintelligence is already concerned by the Islamic State’s ability to infiltrate Europe with jihadists posing as refugees, but Russia possesses espionage tradecraft vastly superior to anything ISIS can muster. “We’ll never be able to select SVR Illegals out from the masses of refugees,” explained a Pentagon intelligence official. “They would beat our immigration vetting, and we’re stronger there than most of Europe.”

Warsaw is similarly sanguine. “We’re familiar with this Kremlin game,” stated a senior Polish intelligence official who noted that Poles who were repatriated home after decades in the Soviet Union, where Stalin had deported them, included many KGB Illegals. Polish security had a devilish time detecting those spies, “and these were our own people. We have no idea who these Arabs even are.”

Poland possesses excellent security services—among the best in NATO—but it’s no wonder that Warsaw has been so reluctant to accept refugees, despite repeated EU demands that they do so. Polish security officials know that they really have no idea how to determine who the newcomers actually are. In the meantime, the Kremlin will keep playing its cynical spy games to manipulate Europe’s refugee crisis to its political advantage. 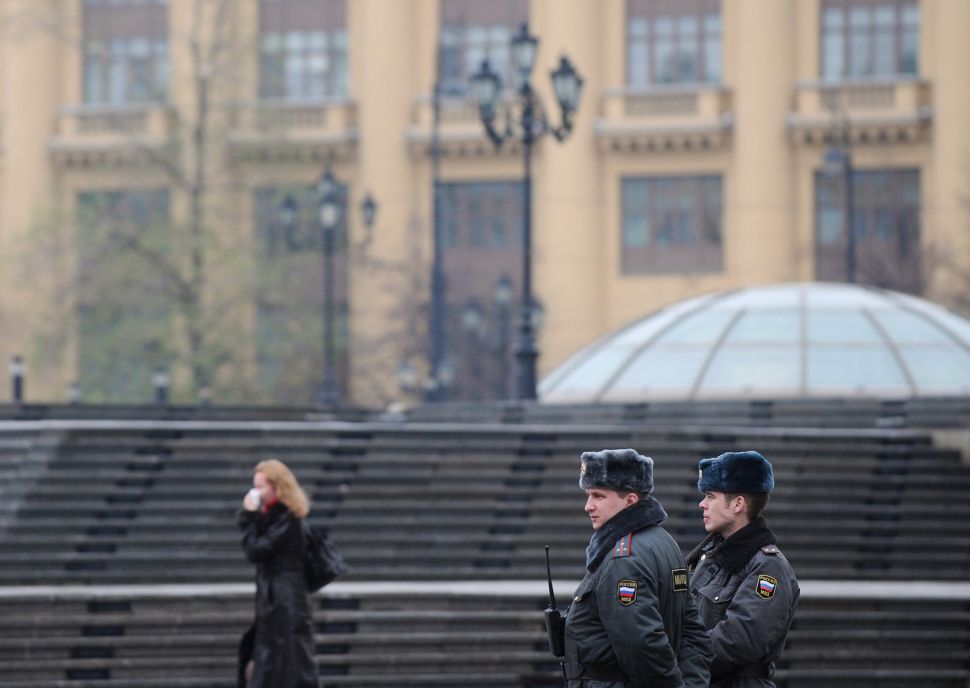