The crowd, comprised mostly of women but across the spectrum of age and ethnicity, cheered and chanted as they waved banners stating “I Am Not Invisible” translated in numerous languages, from English to Arabic.

“Who Matters? We Matter!” shouted a woman who introduced herself as a schoolteacher. Earlier in the morning, the chant had caught on among her pupils, she explained, much to the annoyance of the school board. “I told them I’m empowering these kids!”

The City Hall rally joined hundreds of thousands of others across the nation in sporting denim jeans and jackets to symbolize solidarity with victims of sexual assault.

The significance of wearing denim one day each April is the product of a 24-year-old Italian sexual assault case. In 1992, the Italian Supreme Court overturned their decision to convict a man accused of rape because the victim had been wearing jeans. Denim clothes were tight-fitting and could not be easily pulled off, the Court reasoned, the sexual act therefore must have been consensual.

Wearing jeans is a “symbol of protest against erroneous and destructive attitudes against sexual assault,” the Denim Day website states, a rebuttal of one of the most problematic and dangerous aspects of sexual assault cases: victim blaming.

“We’re here to say yes means yes and no means no,” said New York City Council Woman Laurie Cumbo, the large crowd finishing the end of her sentence for her. She began by stressing the importance of collaboration between genders if the issue of sexual assault is to be truly dealt with.

Ms. Cumbo’s major point was that a message sent about sexual assault and women’s issues from New York City is capable of reverberating throughout the world. She then spoke of a “certain presidential candidate,” referencing Donald Trump and his recent attack on Hillary Clinton who he said was playing the “woman card” to pander to the public vote.

New York City’s first lady, Chirlane McCray, wife to Mayor Bill de Blasio, also addressed the crowd, speaking of the power of women, like Ms. Cumbo, in using “their limitless potential to improve the lives of others.”

Ms. McCray went on to stress that the de Blasio administration “would not rest” until every New Yorker was able to feel safe from sexual assault. 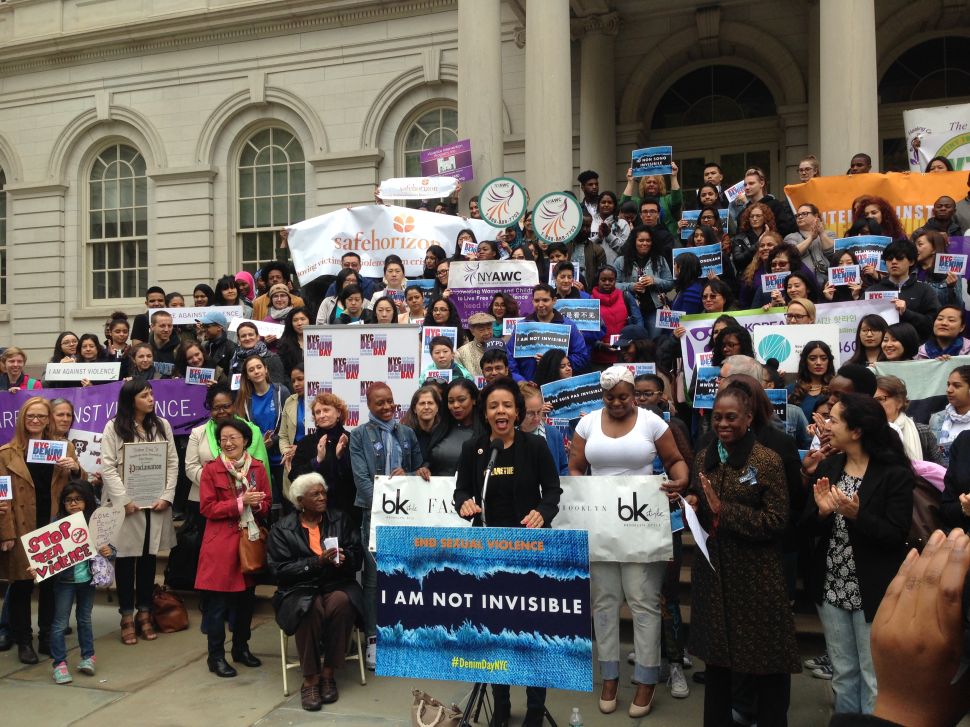