On Wednesday night, around 9:30 or 10:00, in case you missed it, the display was outdoors at the Guggenheim Museum, although probably not images the curators would have approved. A group protesting poor labor conditions in Abu Dhabi, capital of the United Arab Emirates where the Guggenheim, the Louvre and the British Museum are in the process of building museum outposts, projected words and images onto the exterior of the Guggenheim on Fifth Avenue.

The images were the faces of museum director Richard Armstrong and members of the board of trustees, and there were comments in English (“Ultra Luxury Art, Ultra Low Wages,” “1%,” “You Broke Trust” and “Bad Move!”) as well as other phrases in Arabic, Hindi, Telgu, Punjabi and Bengali. (Those are the languages of many of the foreign workers brought in to build these museums and perform other jobs.)

The projections were the work of a group called Gulf Labor Luxury Faction (GULF), consisting of “artists and activists who carry out active interventions,” said Gregory Sholette, an associate professor in the studio art department at Queens College and himself part of the dozen-member Gulf Labor Coalition, which has met periodically with board members at the Guggenheim since 2010 to discuss how the museum should advocate on behalf of the low-wage workers at their building site. He noted that many of the members of GULF came out of Occupy Wall Street, and one of their tools is a truck called “the Illuminator, which has a 12,000-lumen projector and tons of batteries inside.” All the images and phrases were projected from that truck.

The principal concerns of the Gulf Labor Coalition have been the recruitment fees that foreign workers are required to pay in order to be employed in the United Arab Emirates, the low wages paid to these foreign workers and the fact that they are not permitted to form a union.

At first, the museum seemed willing to entertain discussion about its labor practices. But then six years of negotiation meetings between board members and the Coalition were discontinued earlier this year, according to a spokesperson for the Guggenheim. On April 17th, the Guggenheim Foundation issued a statement announcing that “these direct discussions are no longer productive. Gulf Labor continues to shift its demands on the Guggenheim beyond the reach of our influence as an arts institution while spreading mistruths about the project and our role in it.” The spokeswoman added that construction at the museum is essentially stalled since 2011.

“Nothing has happened since then,” the spokesperson said. “No contract for the building has been awarded, and there is no timeline for construction.”

Mr. Sholette said that museum trustees “don’t want to deal with us,” and that a principal aim of the Wednesday night action was to “get the Guggenheim to rethink its position.”

After the show on the exterior of the museum, the group and the truck drove downtown to 72ndand Park Avenue, projecting some of the same and some different images onto the apartment building where William Mack, president of the museum’s board of trustees, lives.

Projections such as these generally require a permit, but neither the museum nor Mr. Mack have contacted the police. “We saw a police car drive by,” Sholette said, “but it didn’t stop. Some people walked by, and we explained to them what we were doing.” At the building where Mr. Mack resides, one passer-by said, “’Oh, I didn’t know he lived here.’” 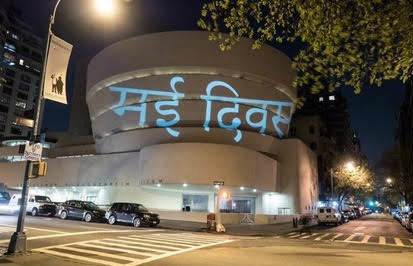