Two weeks before she faces down Sen. Bernie Sanders in the state she represented for eight years in the Senate, Hillary Clinton held campaign event at a Brooklyn college this afternoon, taking aim at “dangerous” Republicans like Donald Trump and Sen. Ted Cruz.

Ms. Clinton, the former secretary of state, is locked in an increasingly heated primary with Mr. Sanders, a Vermont independent and Brooklyn native, and craves a decisive win in New York to put the self-described democratic socialist’s candidacy to bed. Appearing at Medgar Evers College, she took a few jabs at Mr. Sanders and several haymakers at Mr. Trump, the billionaire real estate developer and GOP front-runner, and Mr. Cruz, a hardline conservative and top Trump rival.

Ms. Clinton said Mr. Trump’s proposed ban on Muslim immigration was both dangerous and “shameful,” and again mocked Mr. Cruz’s call for increasing police patrols and surveillance of Muslim neighborhoods. “When Ted Cruz said let’s religiously profile people, let’s have special police patrols that go into neighborhoods where Muslims live … how he’s ever gonna figure that out in New York, it’s beyond me,” Ms. Clinton said.

“Maybe other cities have signs,” she quipped.

She said world leaders ask her about what’s going on with the chaotic presidential election and if Mr. Trump, who is known for making incendiary and outlandish declarations, means what it says. She said she tells them that “we’ll sort it out, we’ll make it okay.” (Presumably by electing her president.)

On Mr. Trump’s call, which he later backtracked from, to punish women who have abortions, she said he was simply speaking for the Republican Party writ large.

“He is saying what all of them believe,” she declared to cheers. “He just committed the sin of actually telling people what they think.”

But before Ms. Clinton gets to face a Republican, she needs to put away Mr. Sanders. As the Democratic front-runner, she has been frustrated by Mr. Sanders’ persistence, and took swipes at his free college-for-all plan (she said, once more, she wouldn’t pay to send Mr. Trump’s children or grandchildren to college) and his support for a bill that granted gun manufacturers immunity from lawsuits.

If Ms. Clinton, the prohibitive favorite to win the Democratic nomination, is to successfully fend off Mr. Sanders in New York State, it will help to dominate among the black voters who make up a significant portion of the Democratic electorate in New York City. Ms. Clinton built her delegate lead by routing Mr. Sanders in the South, where African-American voters are a major force in Democratic politics. Beyond the South, Mr. Sanders has found more success with blacks, winning Michigan in part by avoiding landslide losses with African-Americans.

But Ms. Clinton has many advantages in New York, as was on display in the Medgar Evers basketball gymnasium today. The city’s black political establishment, just like the rest of New York political elites, is united behind the former secretary of state. In a panel discussion before her speech, the mother of Eric Garner, the black Staten Island man who died in police custody in 2014, and the wife of Sean Bell, another unarmed black man slain by police in Queens a decade ago, spoke about Ms. Clinton’s record of fighting for stricter gun control, an implicit knock on Mr. Sanders, who represents gun-friendly Vermont.

New York’s black community is not monolithic. In the Flatbush neighborhood surrounding Medgar Evers, Caribbean-Americans hold growing political clout, and some Haitian immigrants still resent the Clintons for the outsized role they’ve played in Haiti’s troubled political scene and its uneven recovery from a devastating 2010 earthquake. Still, it’s not clear Mr. Sanders has done anything yet to stave off what are projected to be huge losses in central Brooklyn and other black areas of the city.

Ms. Clinton has tailored her message to appeal to blacks, particularly older African-American women who could help sway the New York primary in her favor. The former New York senator, who ran in a vicious primary against President Barack Obama eight years ago, is now his most prominent cheerleader, and drew huge applause for declaring that the nation’s first black president doesn’t get the credit he deserves for helping the country recover from a crippling recession.

“Everything he did was against a wall of implacable hostility from the Republicans,” she said. 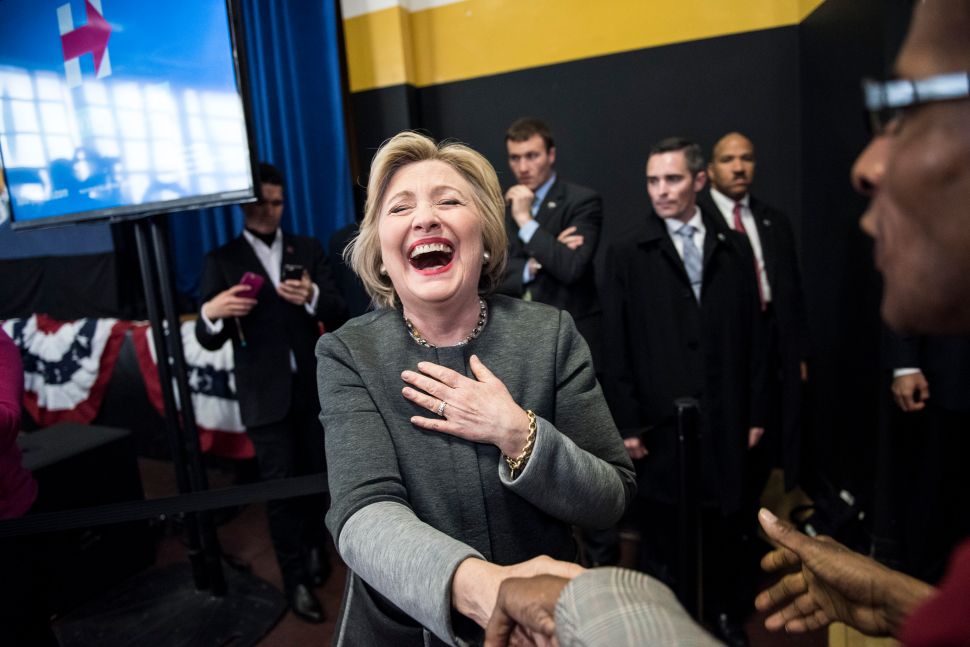